A Wolfrider’s Reflections – the Songbook 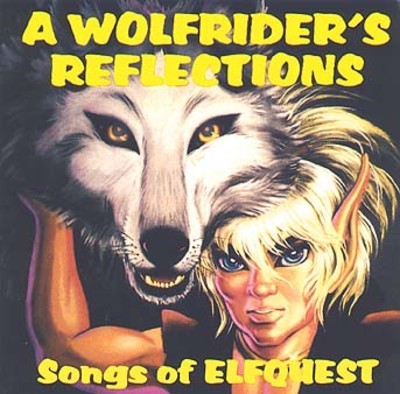 This is an exact facsimile scan of the Wolfrider’s Reflections songbook, originally published by OffCentaur Publications in 1987 to accompany the album by the same name.

Regarding copyright: As far as we can tell, Off Centaur no longer exists. Copyright in the music and lyrics is held by the individual songwriters. Copyright in the package and artwork, with the exception of the title page artwork, is held by Warp Graphics, Inc. You may print out one copy of songs or pages for your own personal use only. Any and all other copying, reposting, or republication of any kind is expressly prohibited.

NOTE: Because this songbook is long out of print, addresses and other identifying information may no longer be valid. Copies may show up from time to time on the collector market, but there are no plans to reissue it.

Introduction to the Songbook

I remember reading once that the sense of smell is the most ancient of senses, the most primitive, evolutionarily speaking. This is because smell is a chemical-based sense, and way back early when we were one-celled critters, it was purely the chemical environment we reacted to. Surely everyone has had the experience of having a new scent suddenly call up a vivid memory of one thing or another; the olfactory nervous system goes directly into the deep, old parts of the brain where images and reactions live.

Well, if all that is true, then hearing must run a very close second to scenting as an ancient and evocative sense – and in humans, because we’ve largely lost the sensitivity in our noses that our mammalian ancestors once had (and just about any animal today still has), I’d argue that hearing is the most primal sense. The most stirring. If you want proof, try the following experiment: Get a video recorder and watch Star Wars with the sound turned off. Then close your eyes and listen to the soundtrack to the movie. There’s no comparison, really, is there?

I believe that we were chanting around the campfire well before the first cave painter took up his (or her) frayed grass brush. As soon as we began to know that this grunt (meaning “food”) was different from that grunt (meaning “rock”) we put tones to the grunts and invented songs, storytelling, and probably drama and theatrics in one fell swoop. A good speech can stir the mind, but music stirs the blood.

ElfQuest, had the story been created way back when, would have been told in song around a roaring fire. The saga of the Wolfriders and their adventures is one of movement and cycles, clear highs and crashing lows, of lulling rhythm and pained dissonance, ideally suited for song.

(It’s no secret that music has been connected to ElfQuest since the tale’s beginning in 1977 – and even before that. Wendy Pini, a fantasy artist from the start, often works to music which crystallizes a mood-in-pictures. A little bit of Mike Oldfield’s Ommadawn here for spirit things, a touch of the soundtrack to Wolfen there for dark doings.)

And now songs we have, real songs that run the gamut from Strongbow’s rage and Two-Edge’s brooding to Petalwing’s manic cheer. Here is wistfulness, love, shock, warmth, soul-searching. And just enough of playing fast and loose – witness “Catatonia County Rag.” This music adds a new facet to the images, helps to conjure mood, sticks in the mind.

Ever since it was conceived, ElfQuest has evolved into different dimensions. From simple story outline, it grew into pictures and the pictures added a dimension. The picture-tale budded and yielded a collection of songs – new interpretations. Ultimately, everything will merge into animation, the illusion of life; and the original imagination-seed will have come to full fruition.

In the meantime, however, I hear that there are more songs in the works for ElfQuest. I hope that they’re not too long in coming, for it’s starting to get dark outside the caves once again, and the bonfire’s being built even now. Gather round. Listen – with ears and with blood. There are stories being told!

(To see full size on your screen, right-click an image and choose “view image” from the menu.) 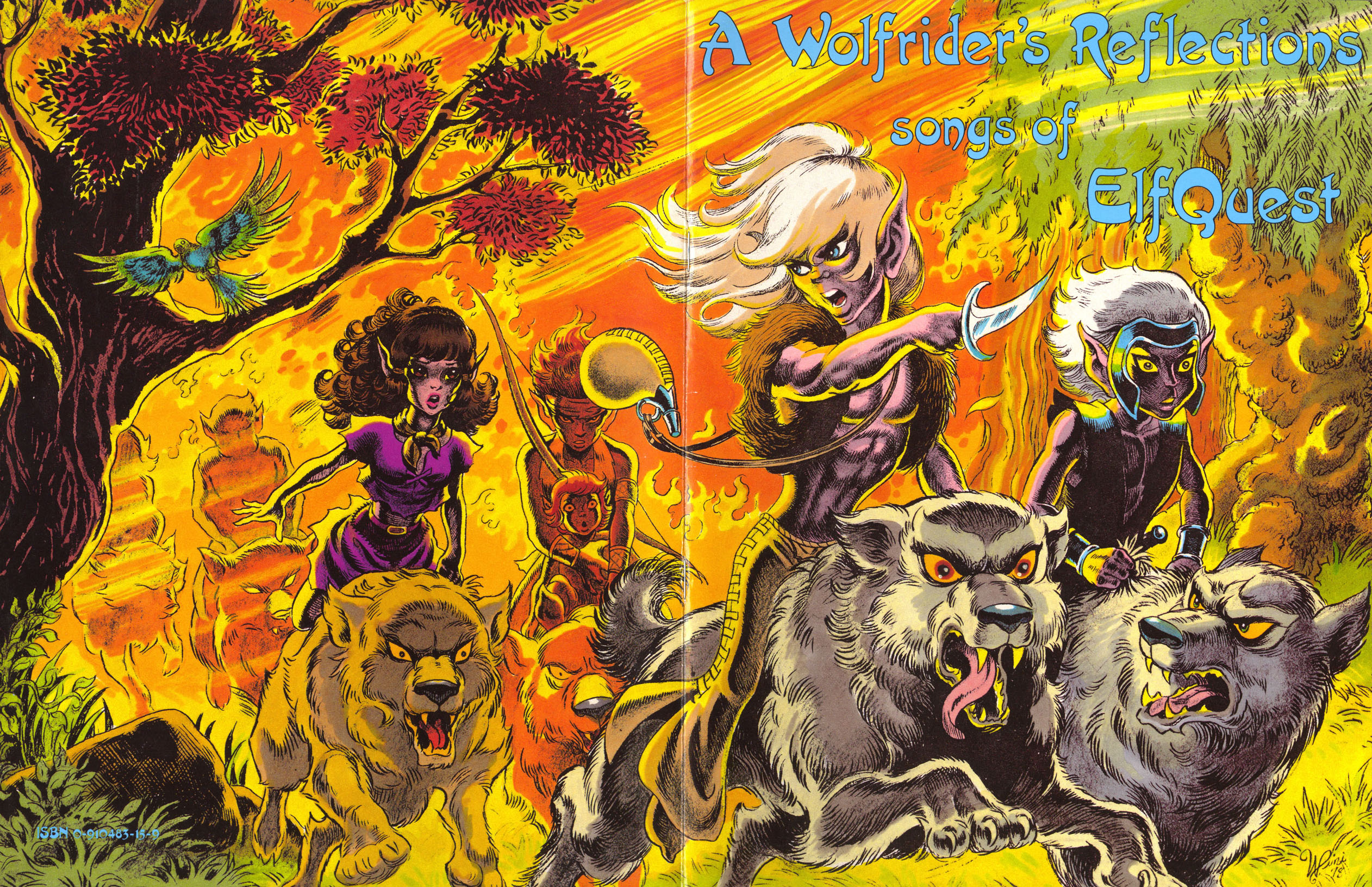 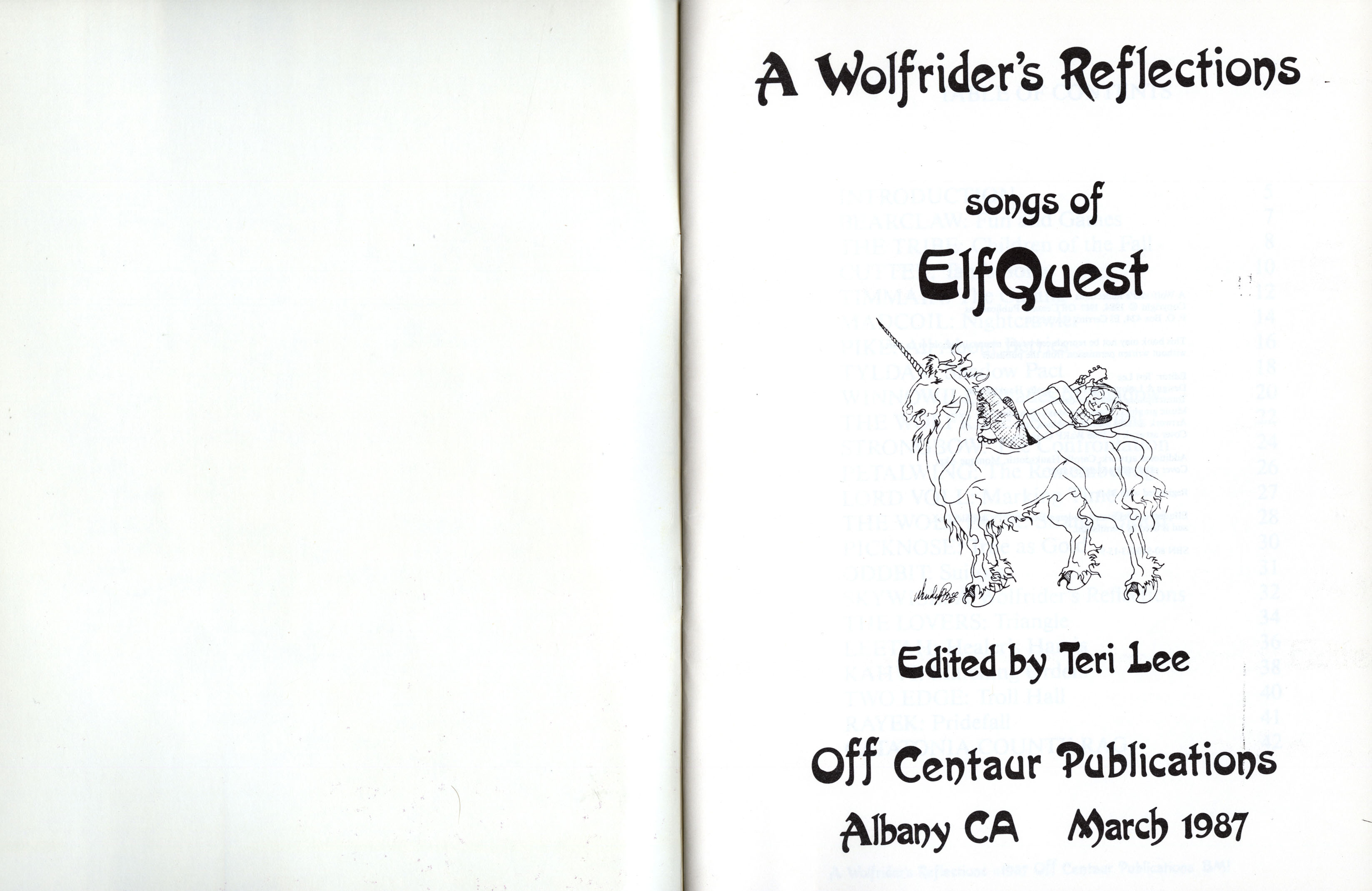 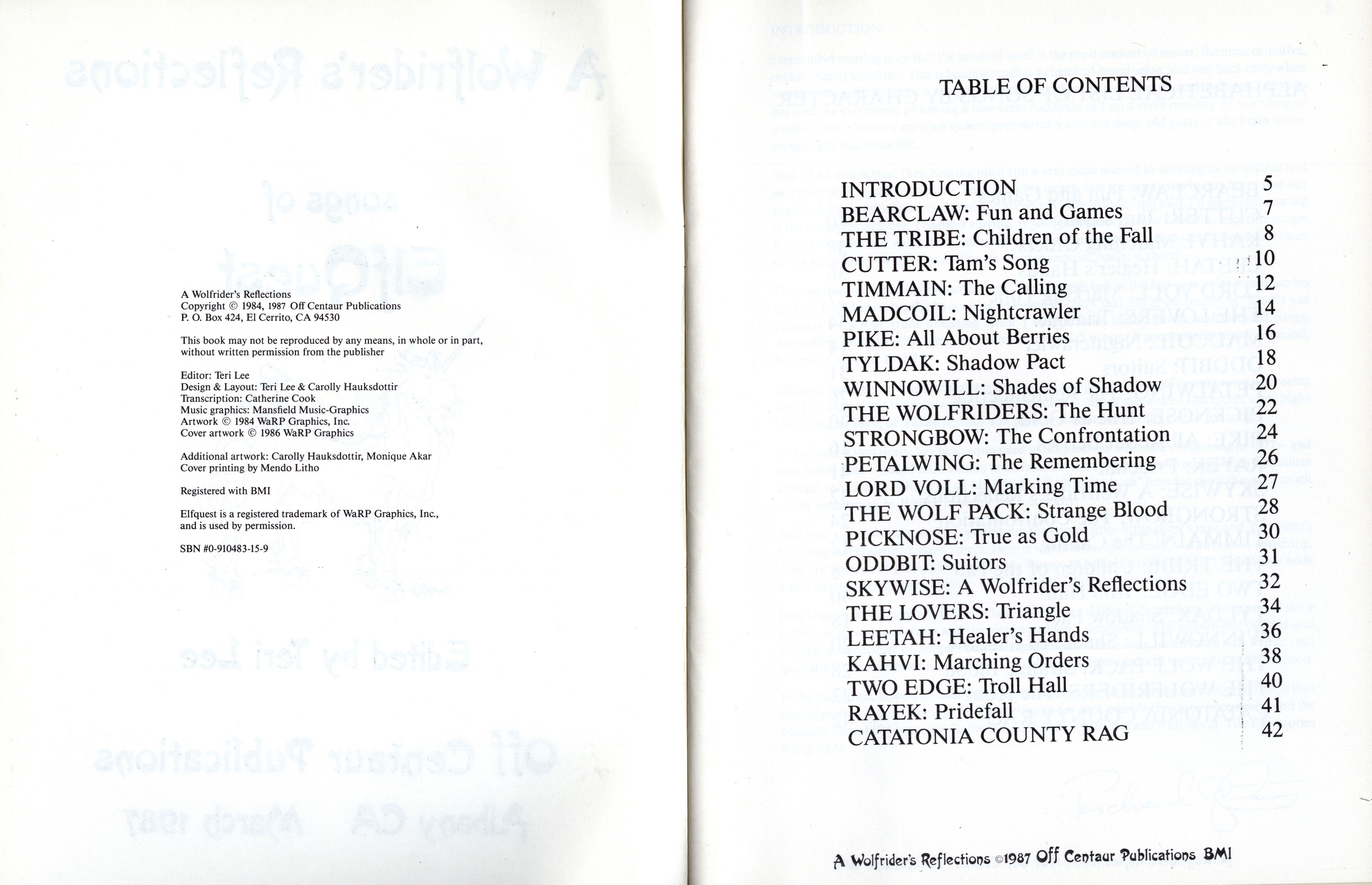 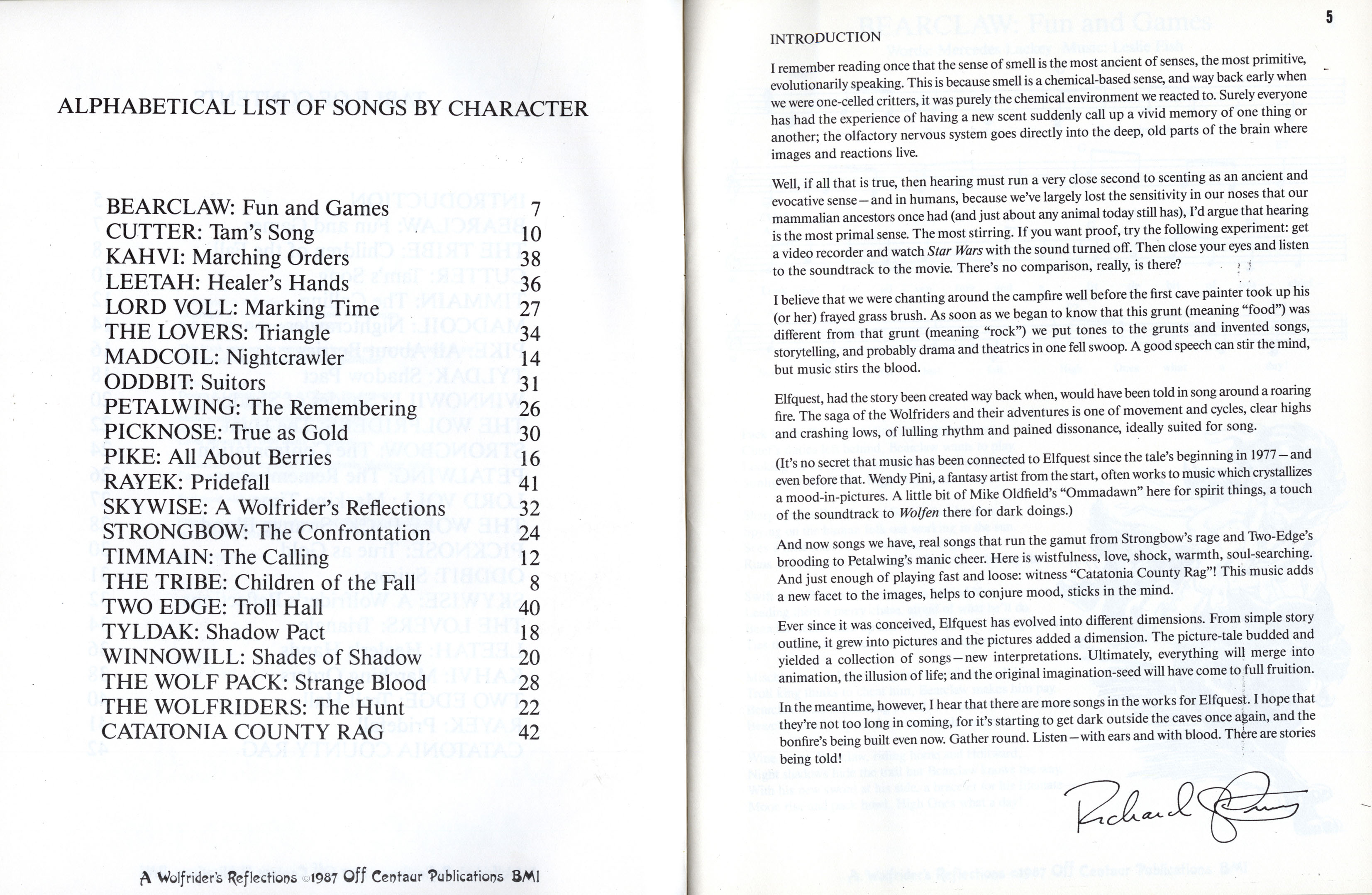 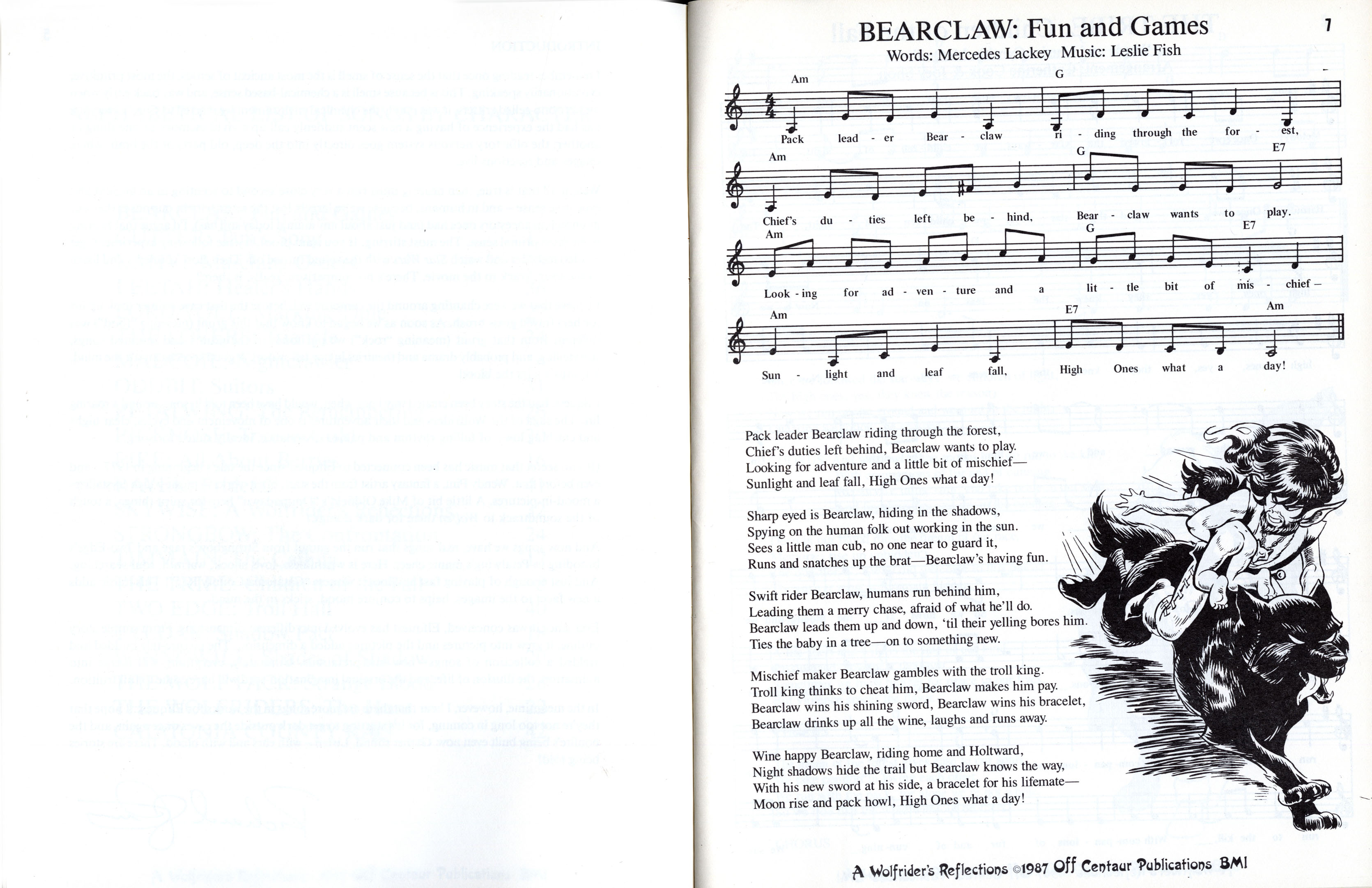 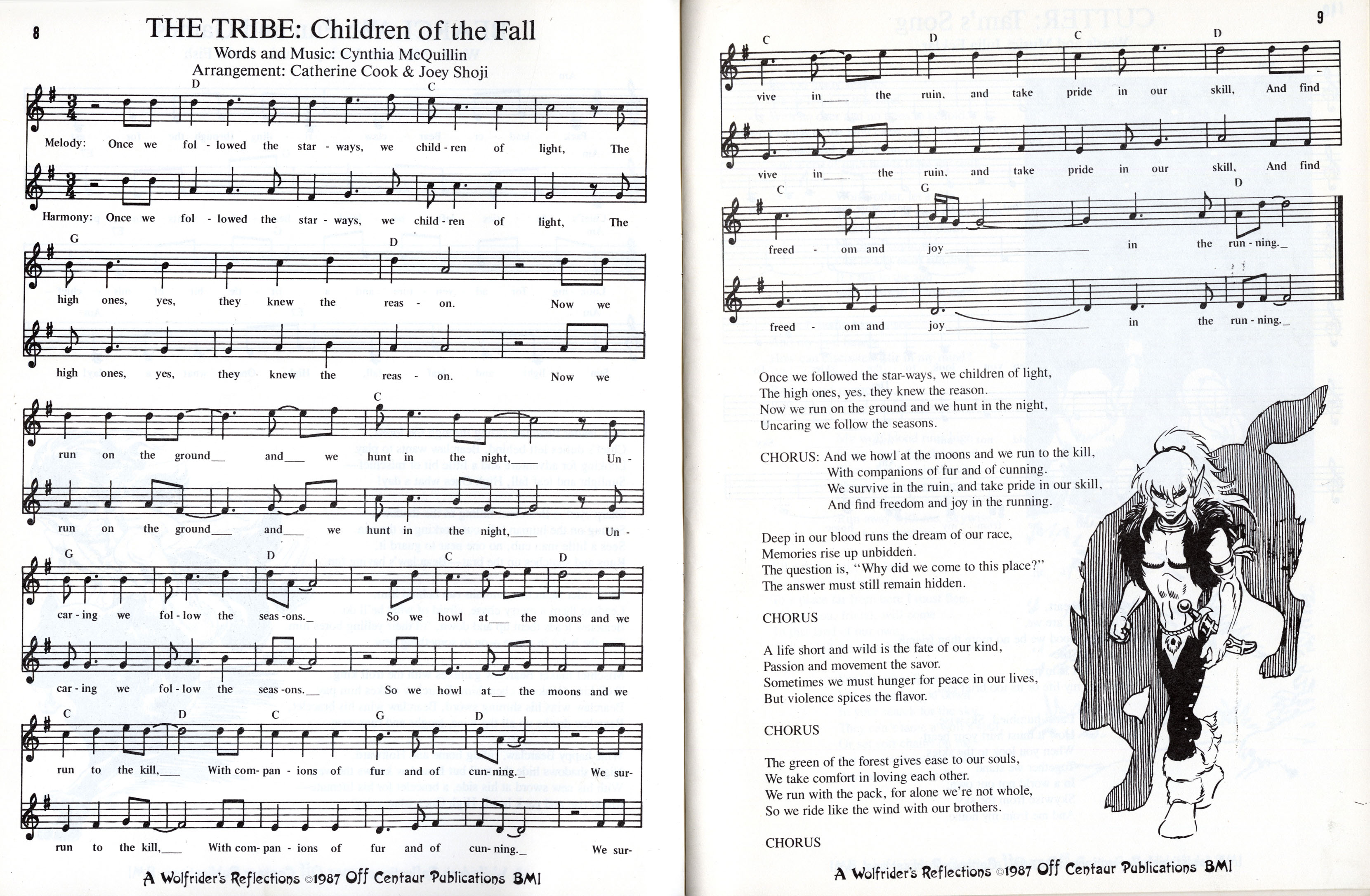 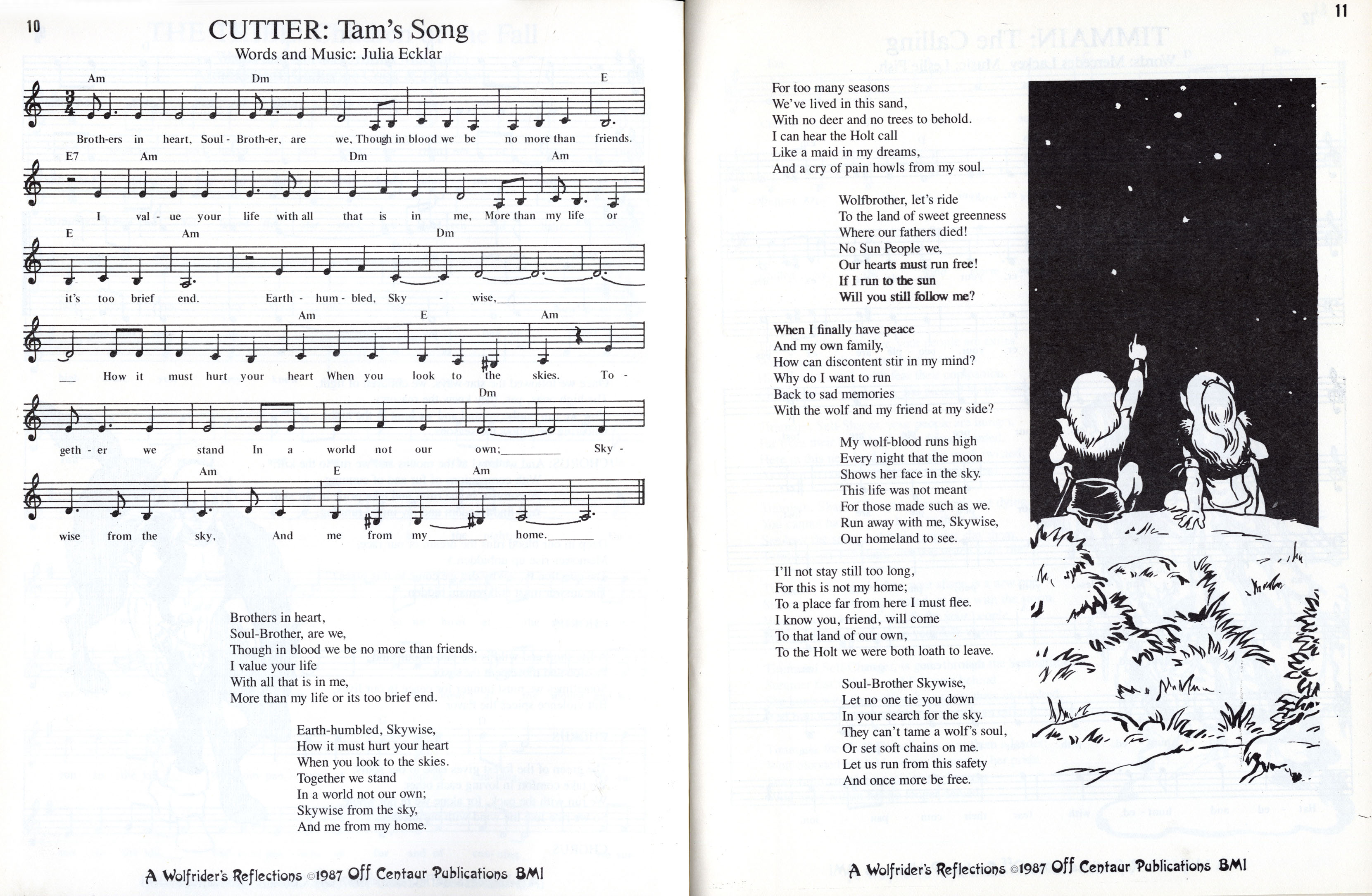 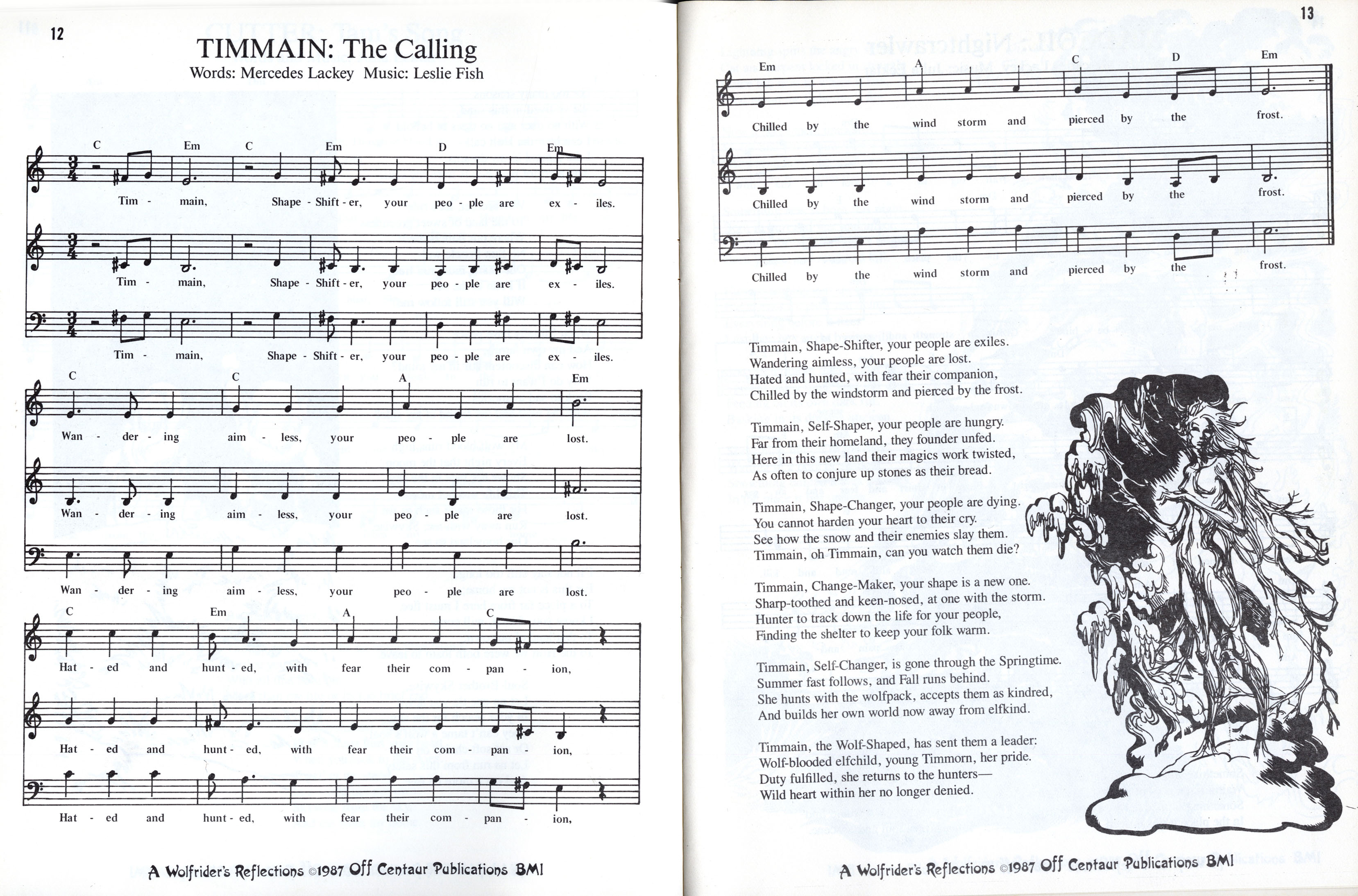 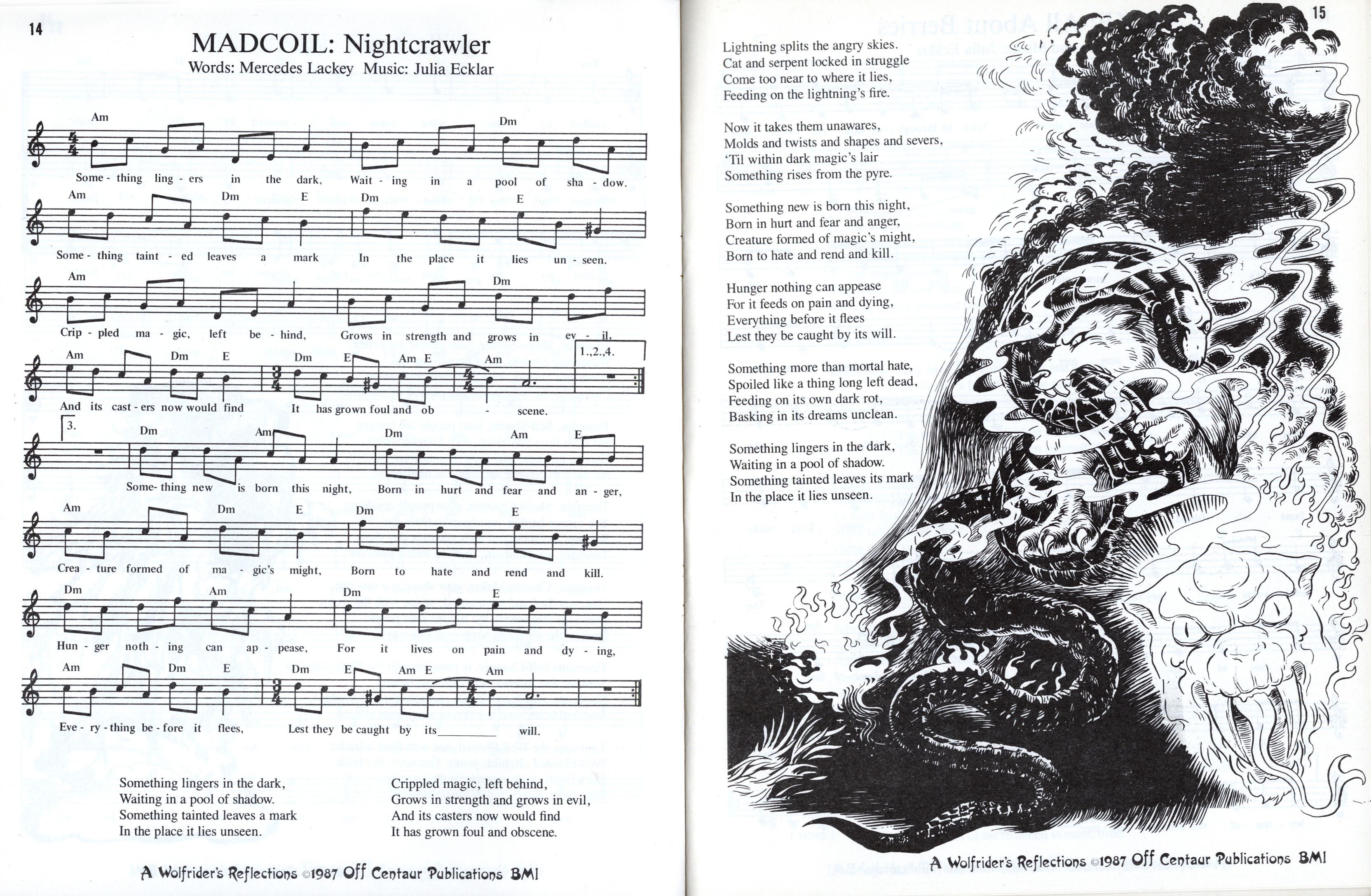 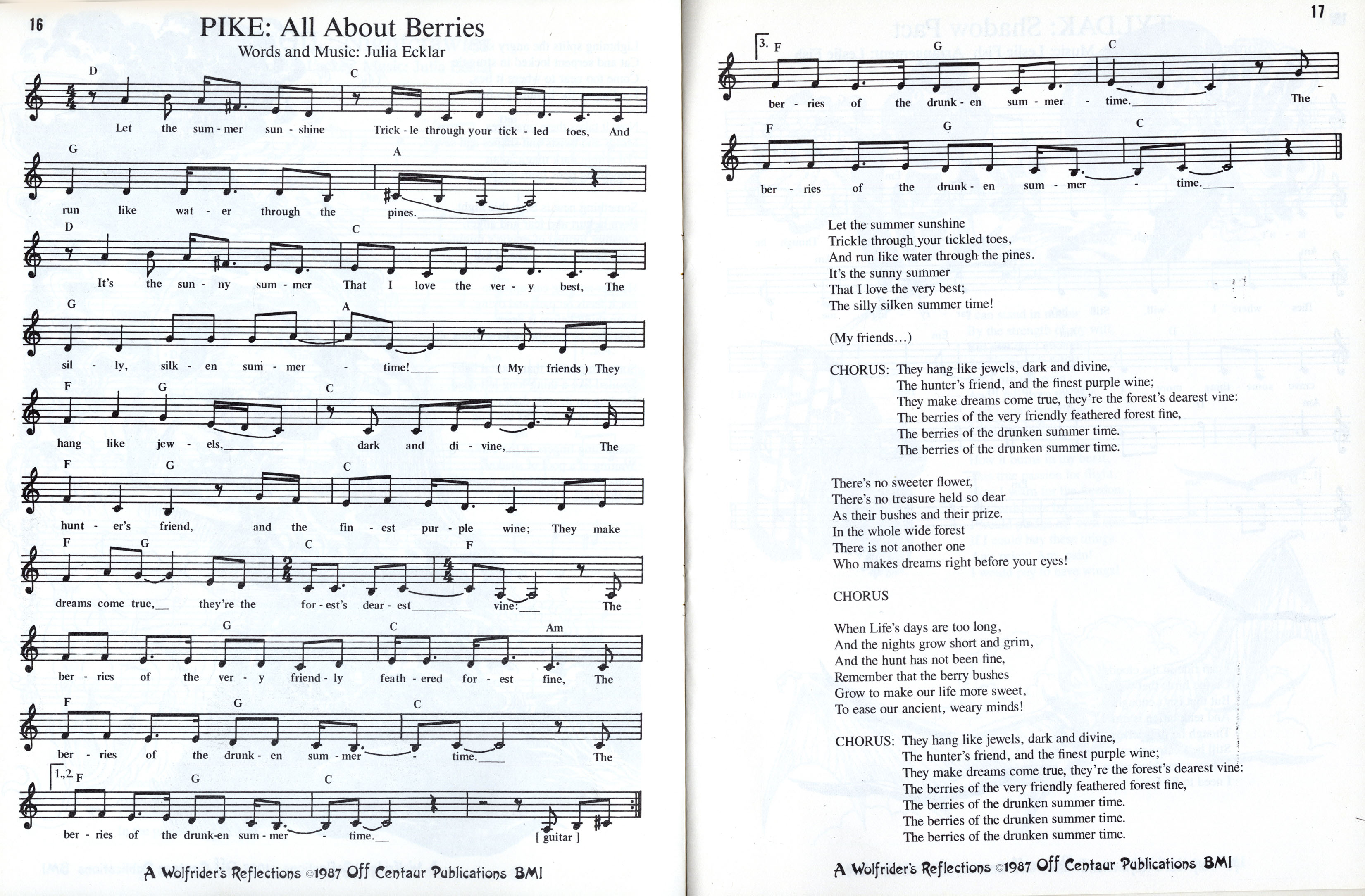 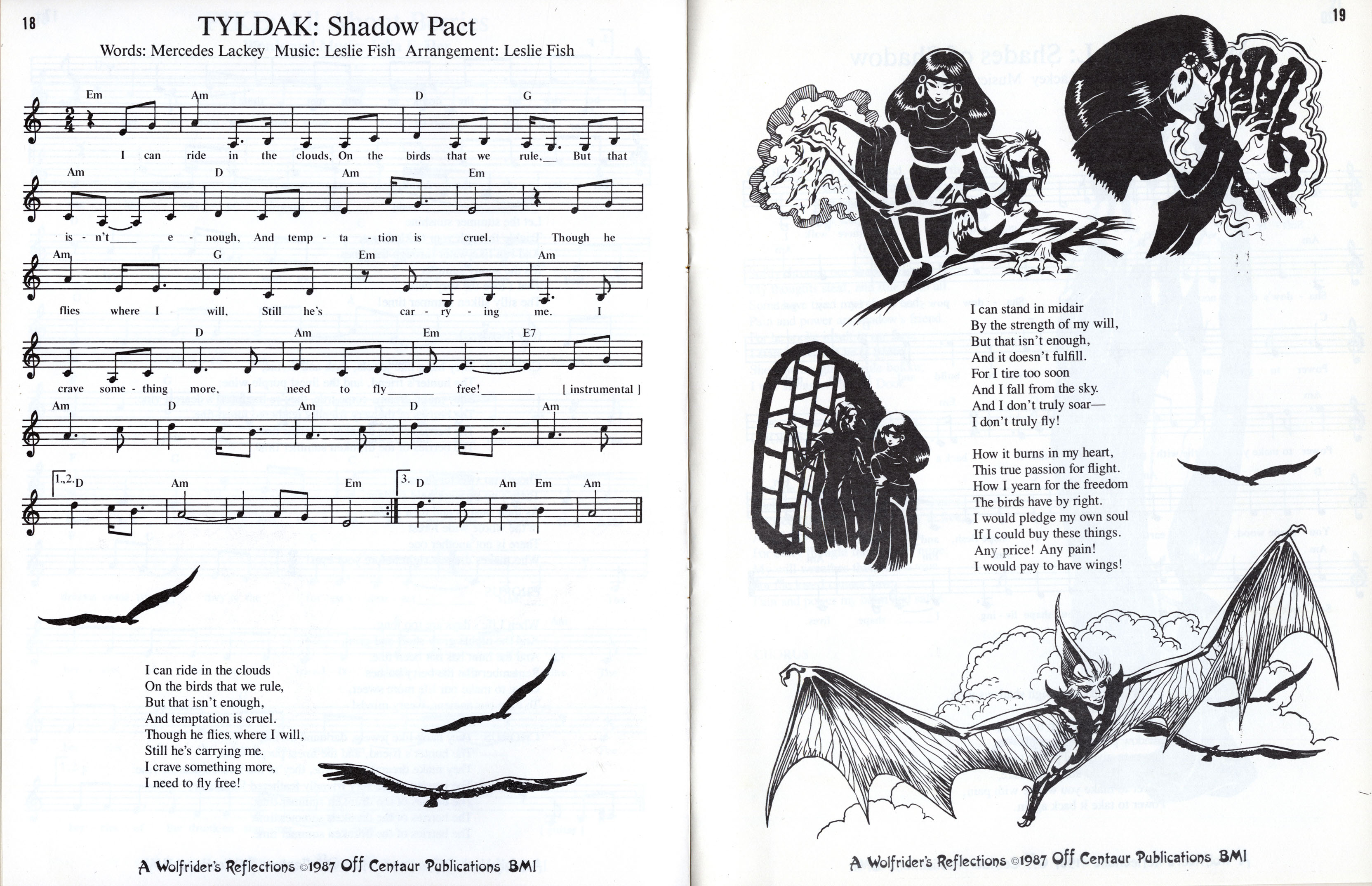 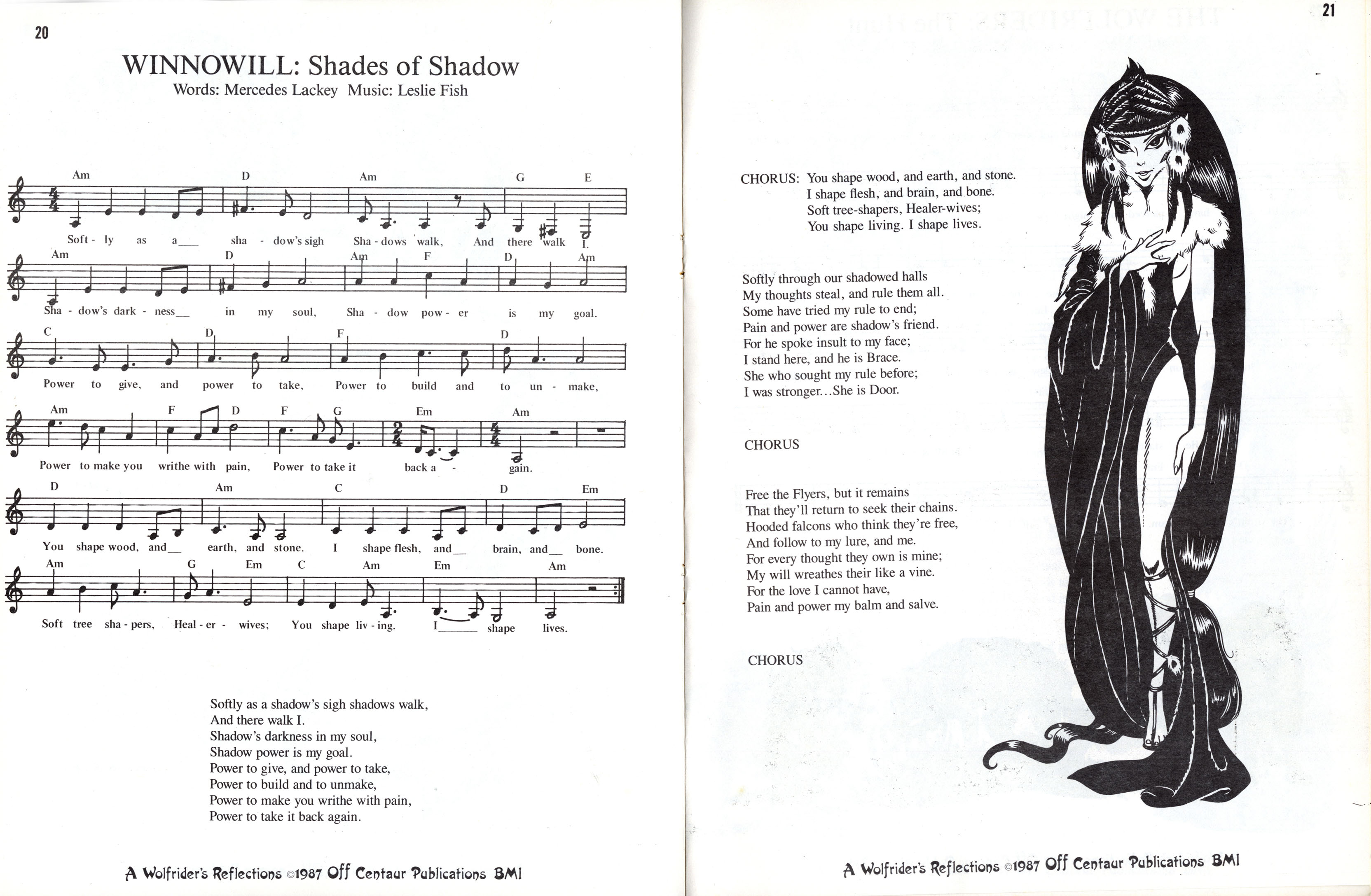 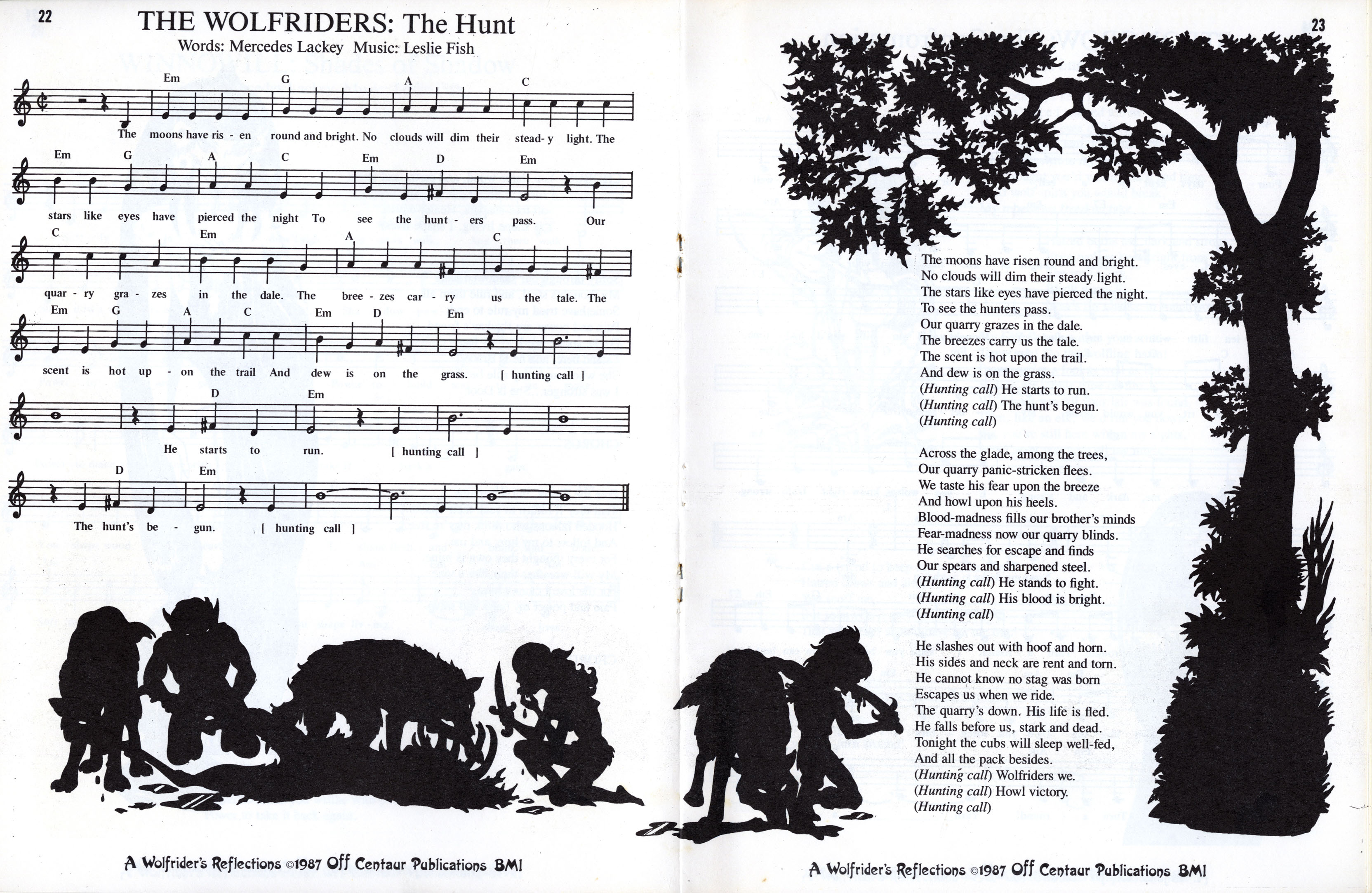 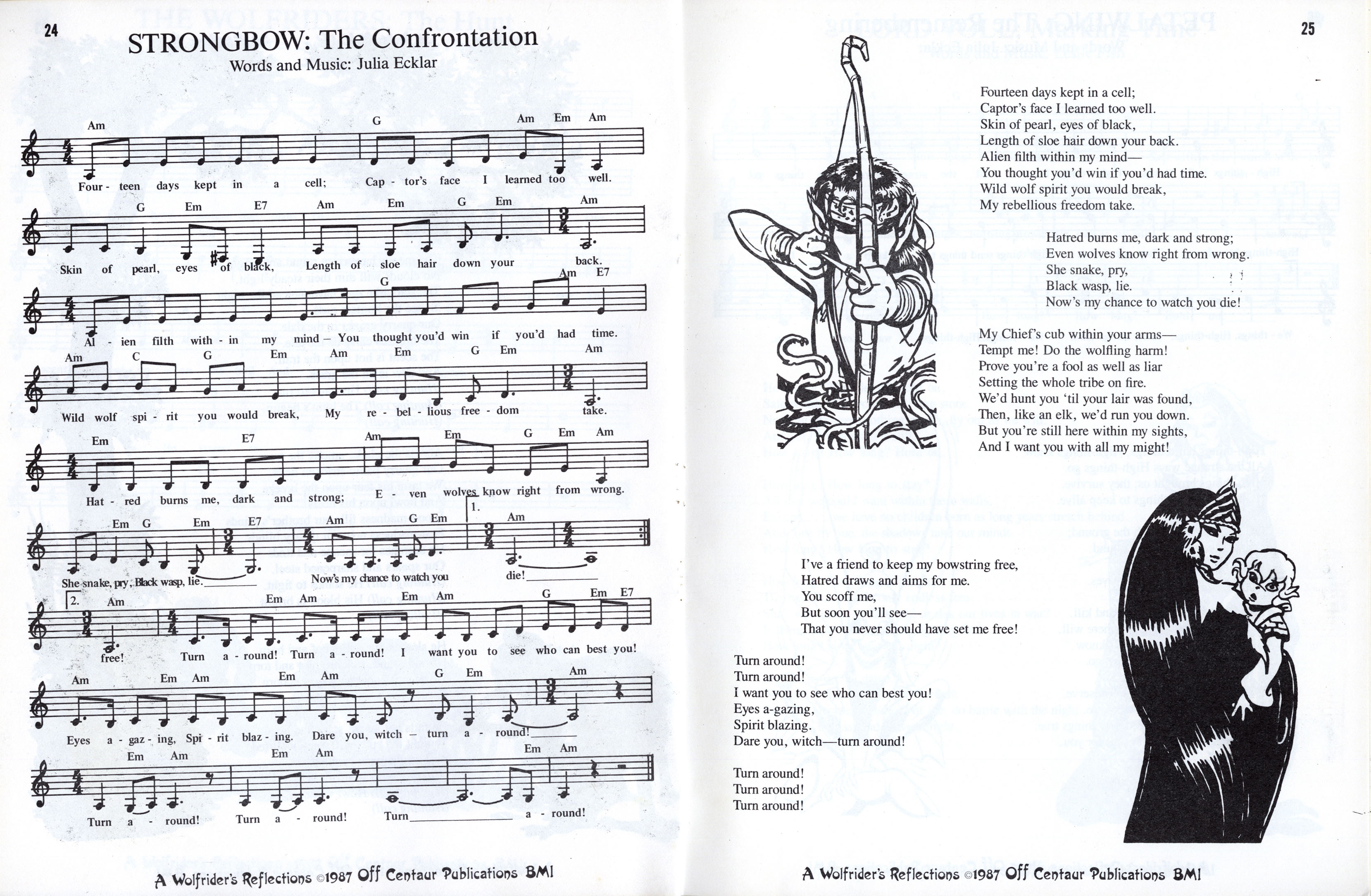 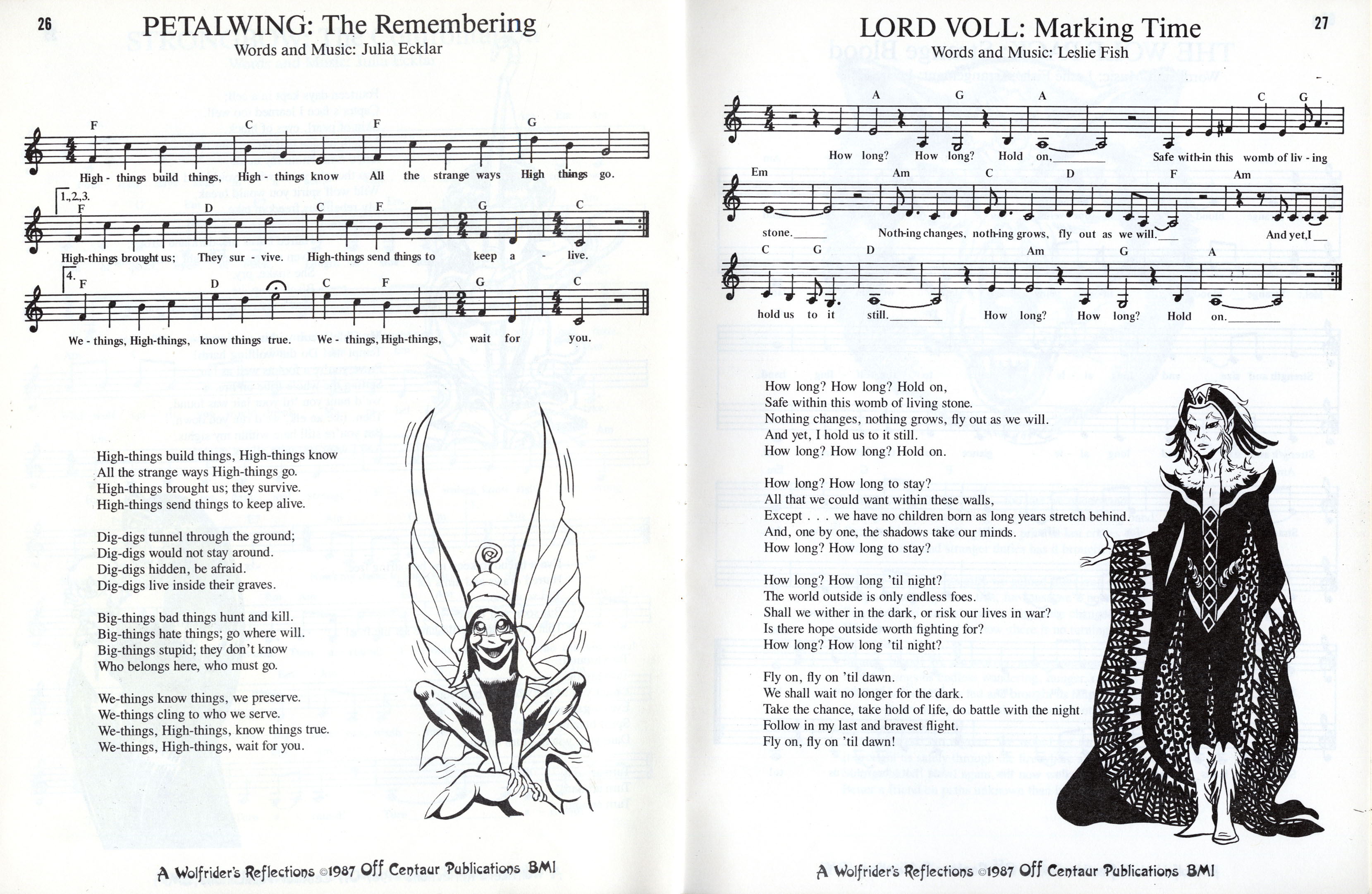 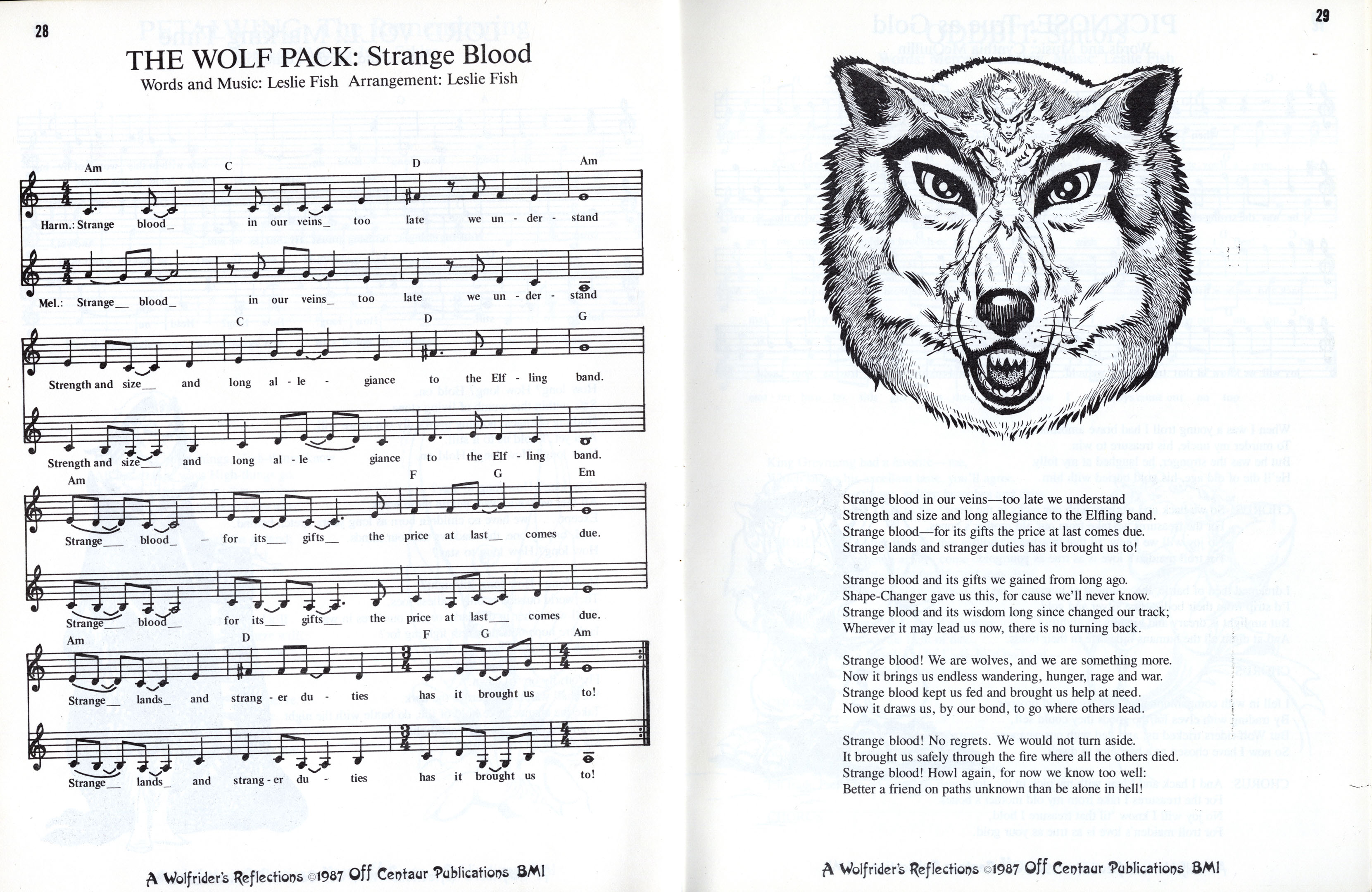 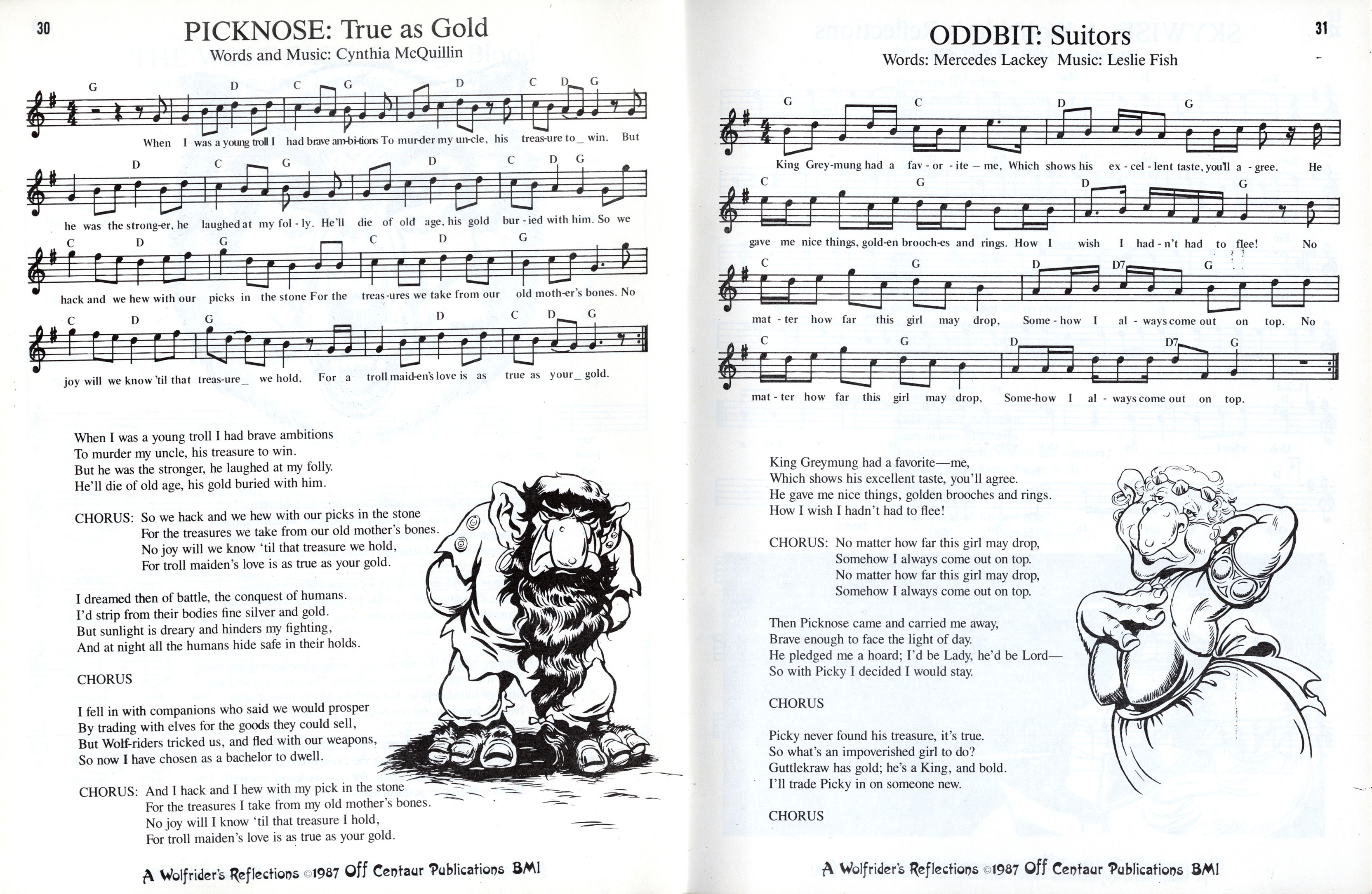 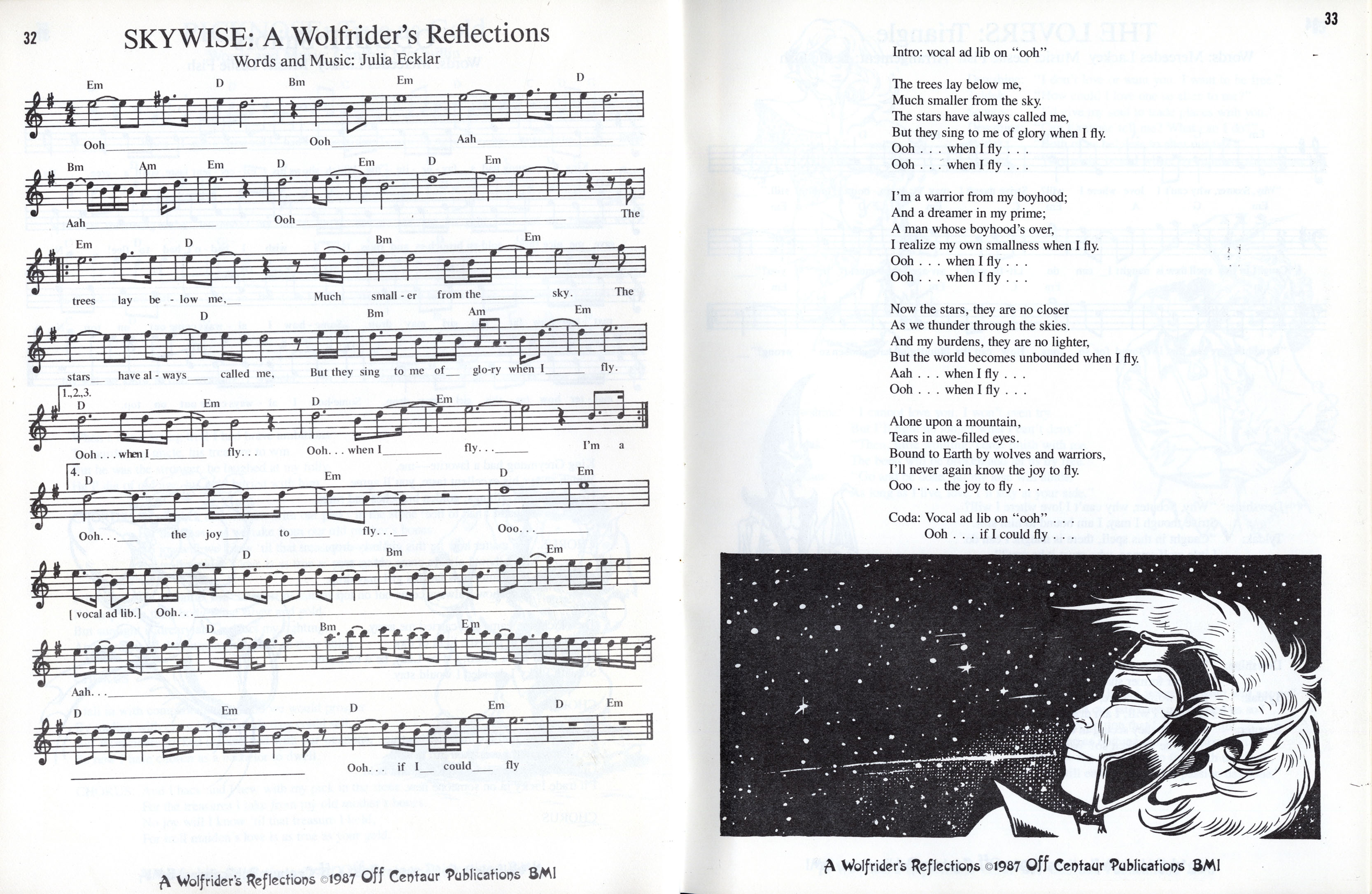 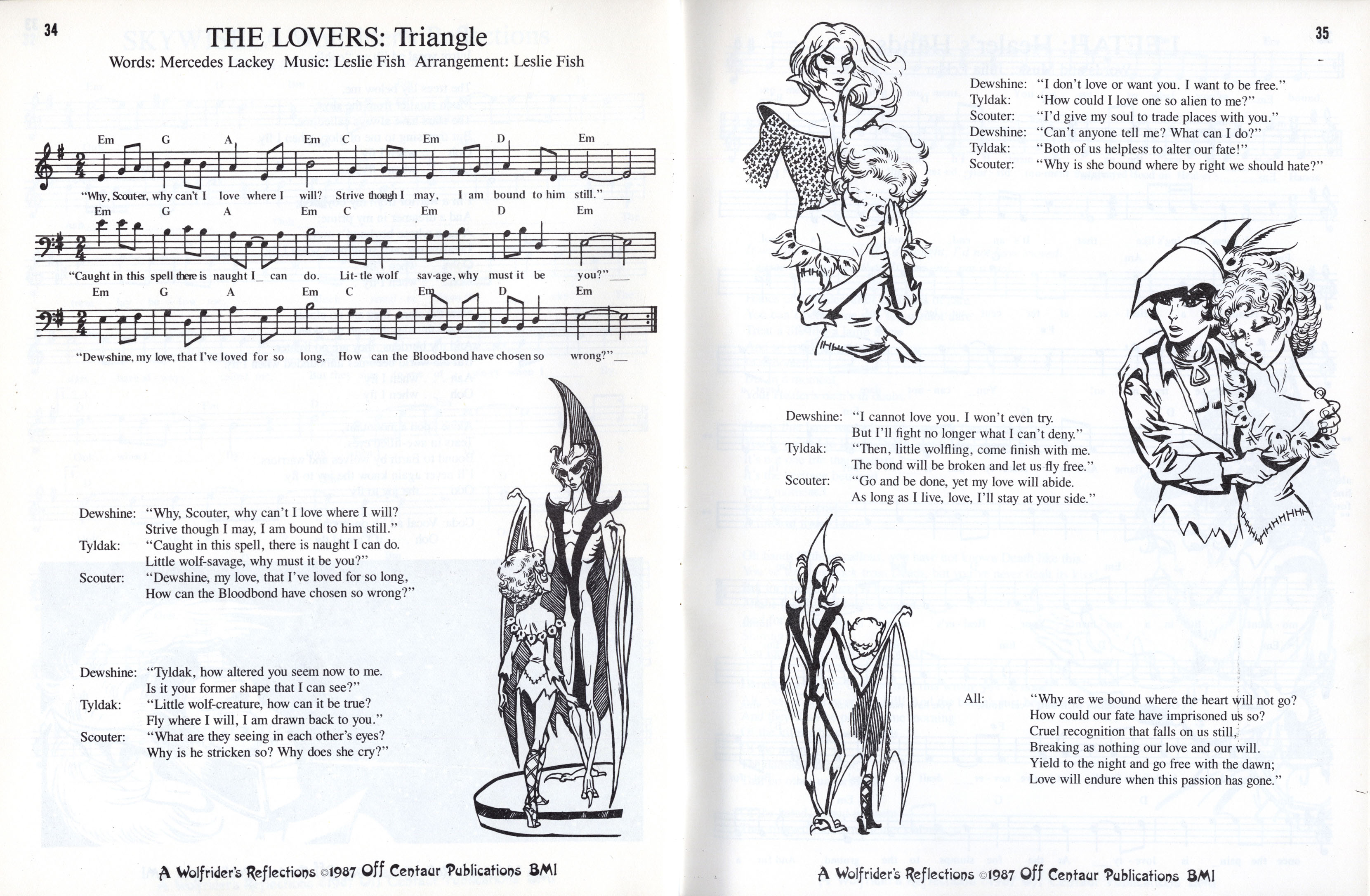 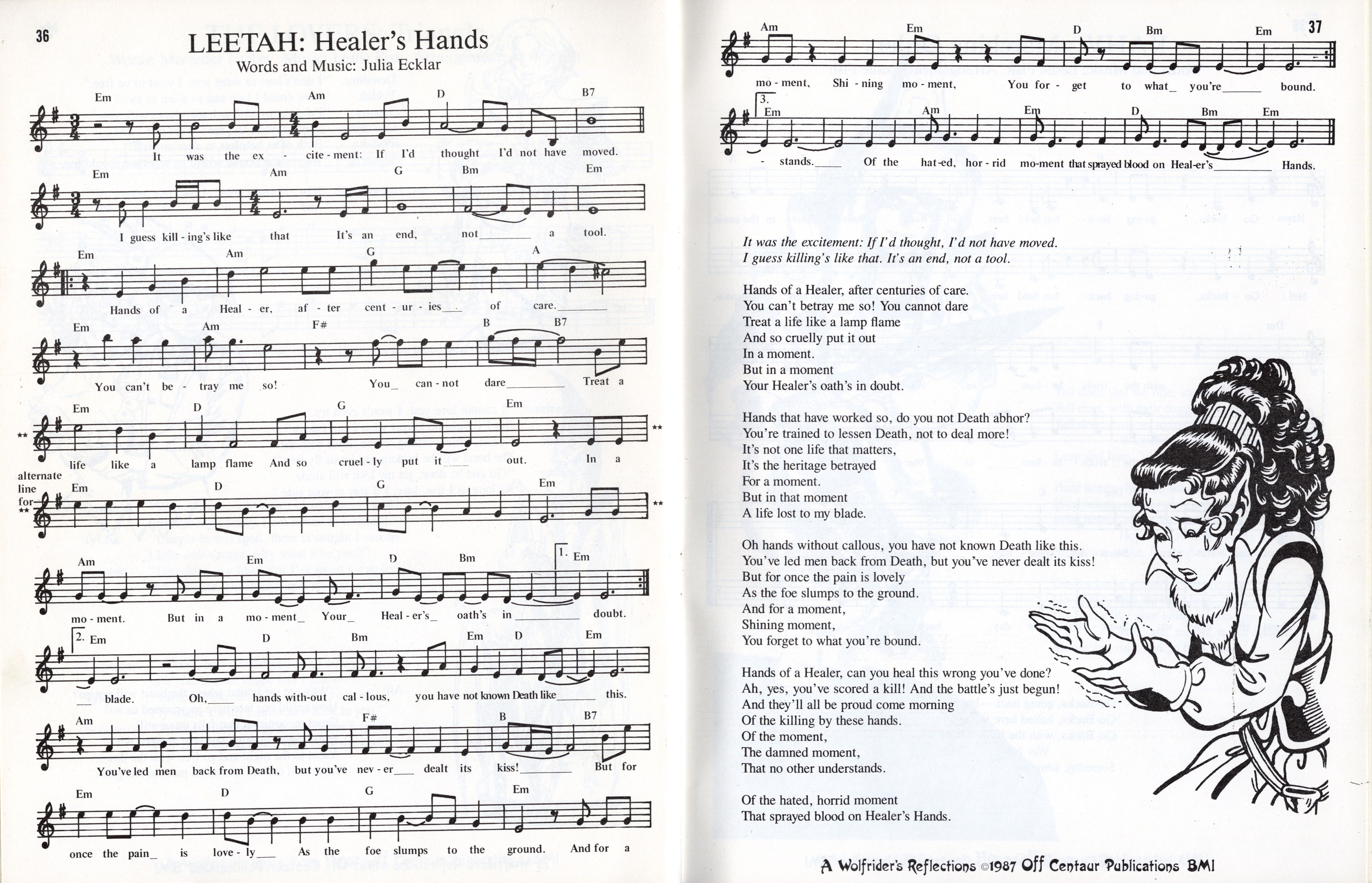 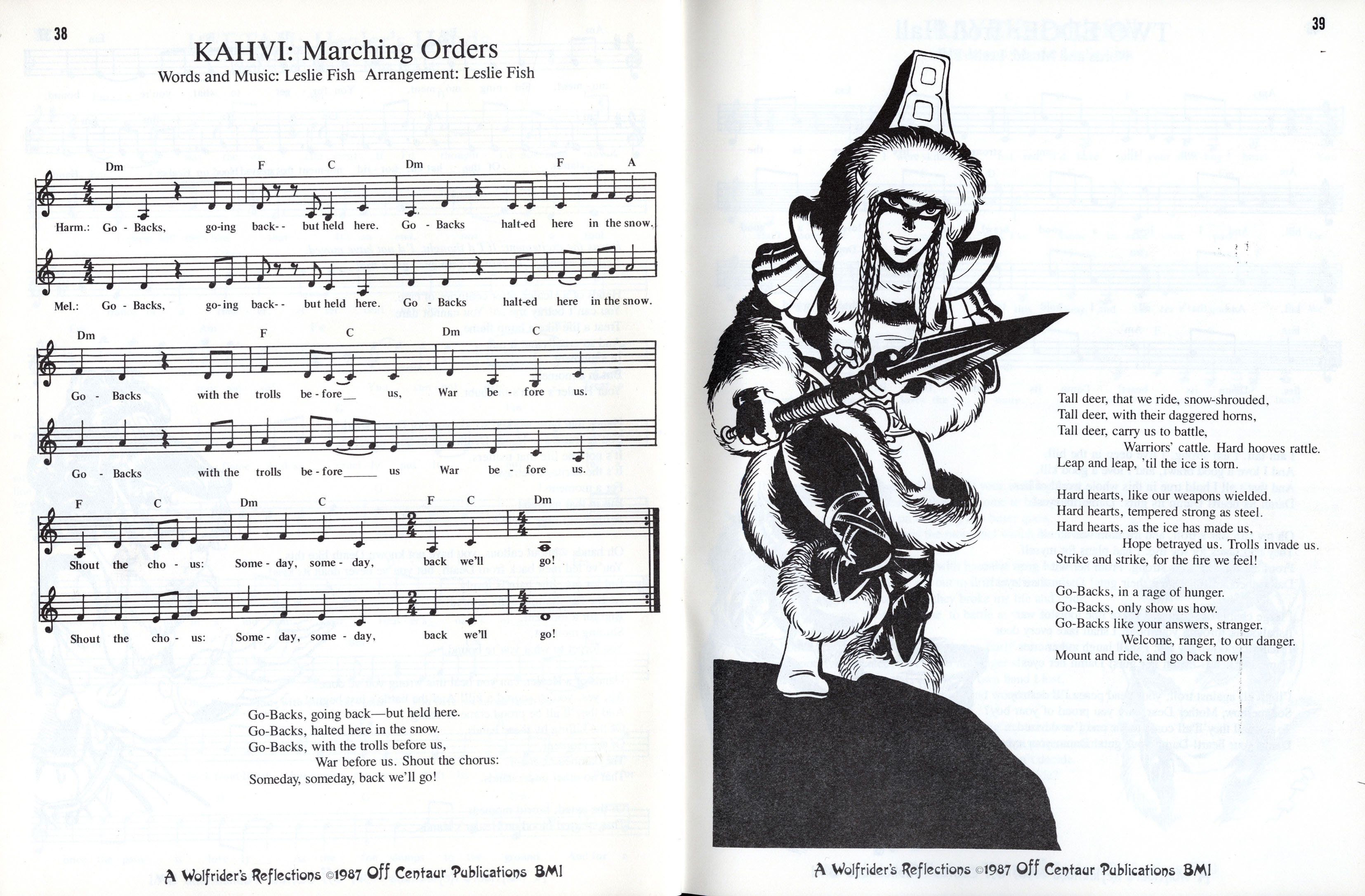 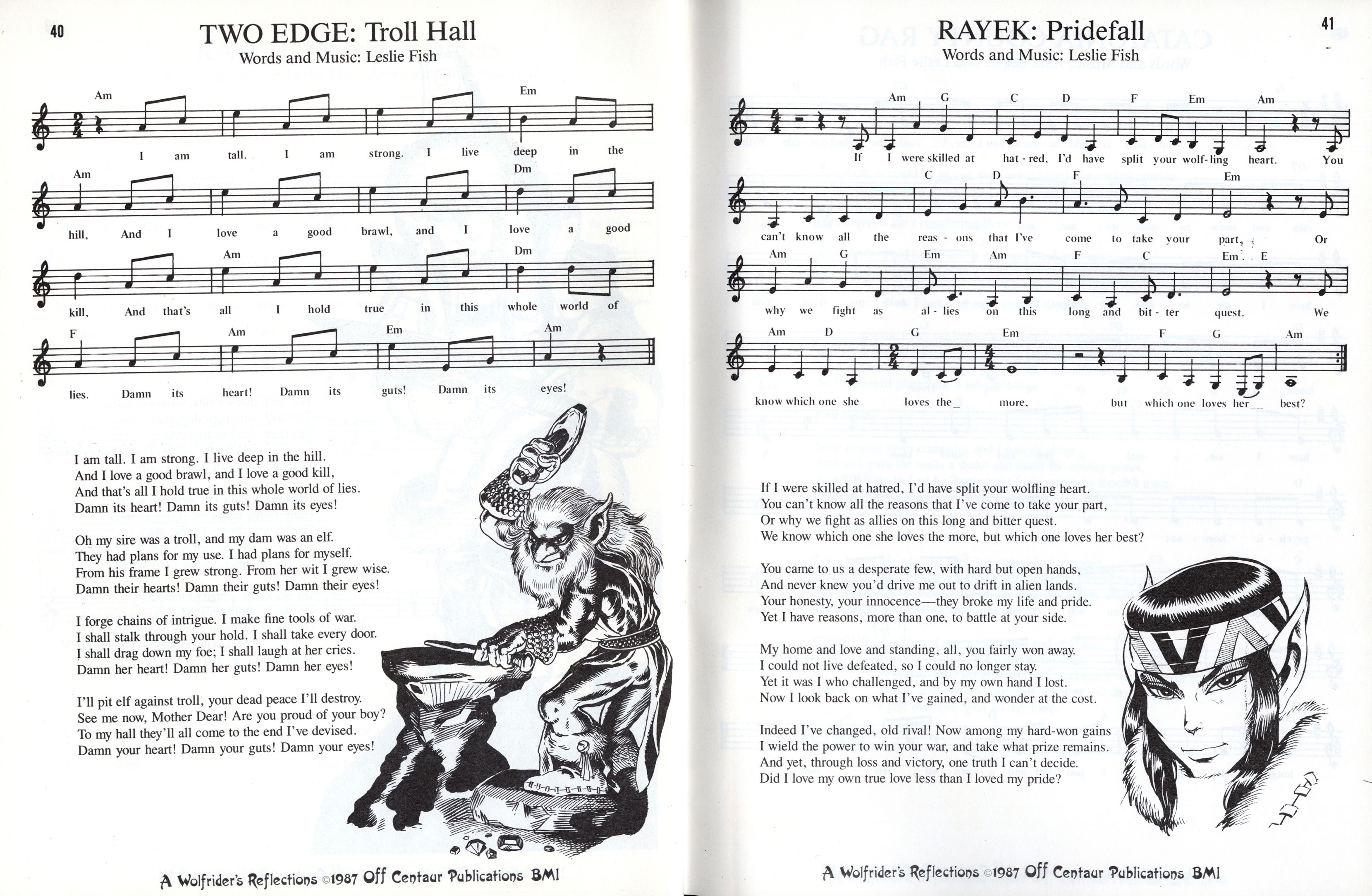 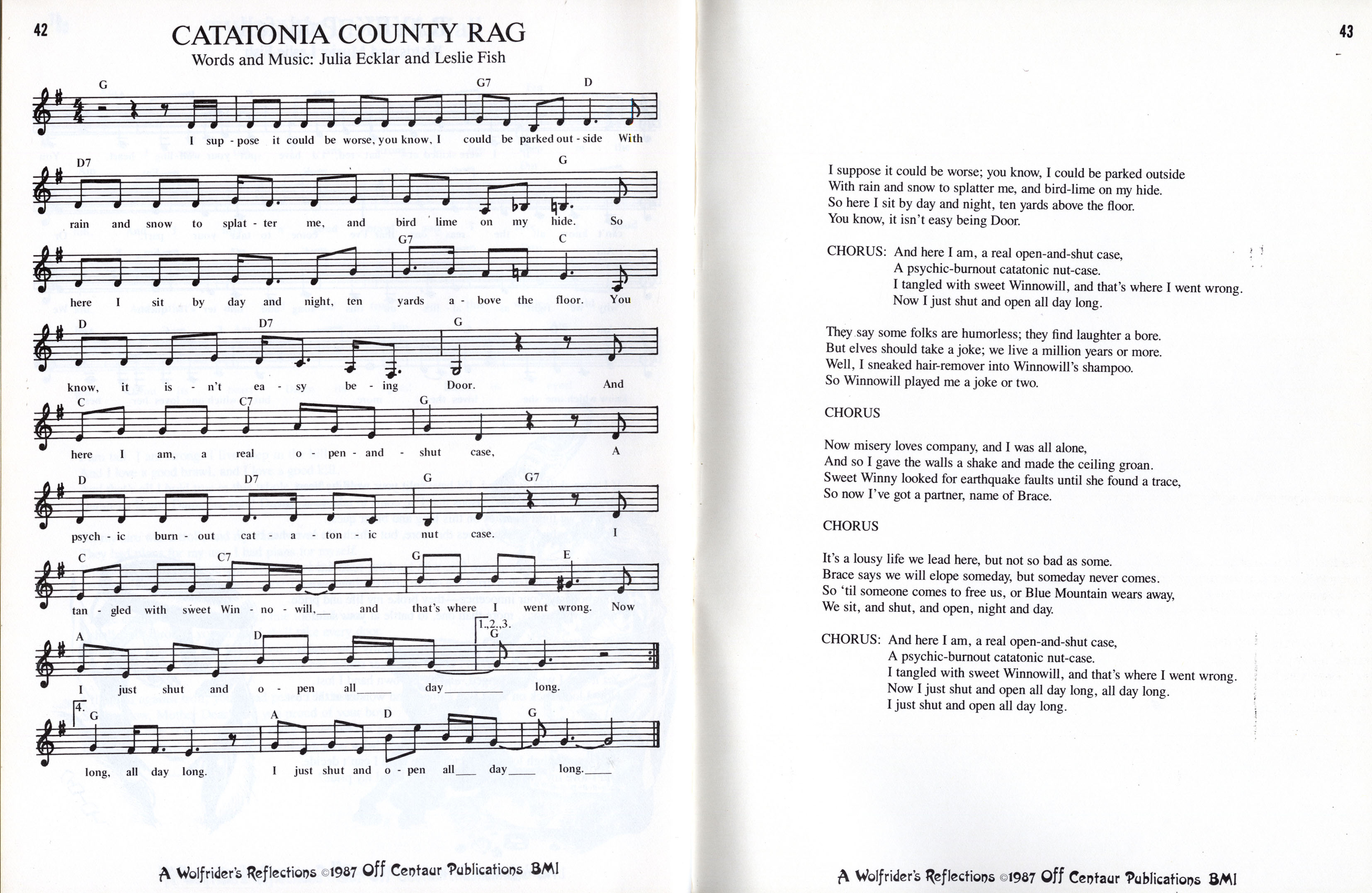