A new year! (And now we get to say it with authority: a new century and a new millennium too!)

Hello again, elf-friends near and far! Words can’t describe just how busy things have been here this past month – and that’s in addition to the usual holiday madness. Myself, I’ve been an absolute Photoshop fiend with nine active projects on my desktop all screaming for attention. And of those projects, one of my favorites is the latest Reader’s Collection of Elfquest stories, on the theme of brotherhood, that I’m co-creating with my new assistant Sonny Strait. You heard a bit about Sonny from me last time. Since then he has become a jewel in Warp Graphics’ crown. Like Photoshop, I don’t know what I ever did without him… although I could do without those sudden outbursts of“KAMEHAMEHA!” that go right up my spine when I’m concentrating. We’d like you to get to know and love Sonny as we do… and what better way to begin than with his own words.

I want to talk to you about the Batman and Robin legend; what it symbolizes, why we relate to it and what in the world it has to do with “Elfquest”.

First of all I don’t buy the homosexual allusions often attributed to the Batman/Robin relationship. One look at the “Batman Forever” movie and its “obvious” slant will tell you the theory just doesn’t ring true when practiced. So if it doesn’t appeal to some latent sexual suppression what is the attraction for us? Why do we relate to it?

I believe the appeal of the dynamic duo myth is its inherent master/apprentice relationship. I also believe that the deficiency of this type of relationship in today’s society is the main contributor to its deterioration. People once passed their knowledge down to the younger generation and that generation in turn would add to it. Today each generation has to start from square one. Where’s the progress in that?

Batman is the ultimate master of the crime fighting arts. He spent his youth studying under many mentors and now he is the master. We relate to him because we want to be him. He represents the striving to be the best and for a just cause.

Robin is, obviously, the apprentice and lucky recipient of Batman’s knowledge. How many of us wouldn’t love to be in his position. Not only to know what we aspire to but to have it in front of us daily as a reminder. You work hard, you become this. That is the nature of the master/apprentice relationship. Not a bad payoff.

Which brings me to Wendy Pini.

I met Wendy at the 2000 San Diego Comic Con. For those of you who may not know this about me, in addition to my Elfquest illustrating duties, I am also a voice actor on the “Dragonball Z” television series. So, it was while doing an autograph session at this convention I found out that Wendy was a big fan of the show. She drew us all cartoons of our characters and hers. Now, I have been a huge “Elfquest” fan since its inception. I also spent the better part of my 20’s as a struggling comic book artist and even had a few books published. So, I decided to surprise Wendy with some drawings of my own. She must have seen something of value in those crude sketches because she then asked me if I would illustrate a book for her.

Now, I have understood the attraction to the Batman/Robin myth for years. I spent over 10 years teaching myself the art of comics, gleaning what I could from books (not only about comics but art in general) and from brief discussions with comic book professionals at various conventions. This trial and error, shooting-in-the-dark approach to comic knowledge at least allowed me to really understand fully what I had learned. (When you totally mess up a page that takes you eight hours to draw you learn… believe me, you learn.) But I longed for a mentor to guide me. Alas, in the small town of Denton, Texas, comic book masters are a bit of a rarity. I told Wendy that I was flattered to be asked to illustrate for her and I would graciously accept the position but I wanted to change the terms a bit. Instead of her considering me another hired artist, I asked if she wouldn’t mind approaching this as a master/apprentice relationship. I knew that I could learn so much from her. Wendy cocked her head to one side, looked at me quizzically and said, “Are you sure?” When I assured her that I wanted that more than anything she humbly accepted the role.

Wendy Pini is one the greatest comic book masters we have left and in spite of this obvious fact she is quite humble. It was this humility that left me confident that I had made the right choice in my mentor. I realize that Wendy is going to read this and my aim isn’t to embarrass her with praise but I think it needs to be mentioned that Wendy has a sense of honor that often seems archaic by today’s “me-oriented” standards. She didn’t become a master because of a need to prove her worth. Wendy is the master she is because she seeks truth in her work and finds it again and again.

I now work in Wendy’s studio. On an almost daily basis I present her with a new page and she critiques it and I go back and make improvements and every time I walk away with new knowledge to add to my cartooning palette. I gotta tell you, fellow Elf-questers, it is such a rush! Wendy was one of my first influences (if you study closely my use of black on a page… 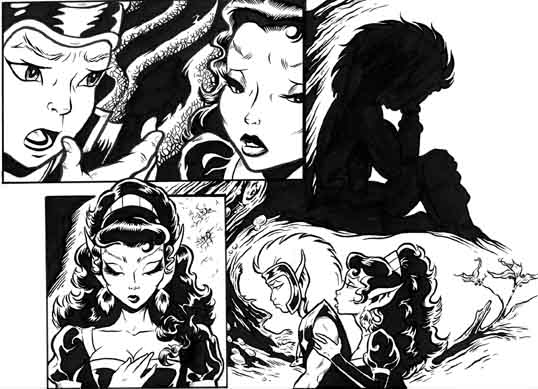 …you’ll realize I swiped that directly from her years ago) and even though we’ve become dear friends she is something more to me. She is the possibility of what I could become if I work hard enough. And it is a rare privilege being the Robin to her Batman.

Heh, heh, I can’t wait to be Nightwing.

(A note from ye editor/webmaster: What follows, even though Wendy and Sonny will deny it from here to Blue Mountain, is a typically respectful day of learning and discovery at Warp West, as seen through the eyes and pen of Sonny Strait…) 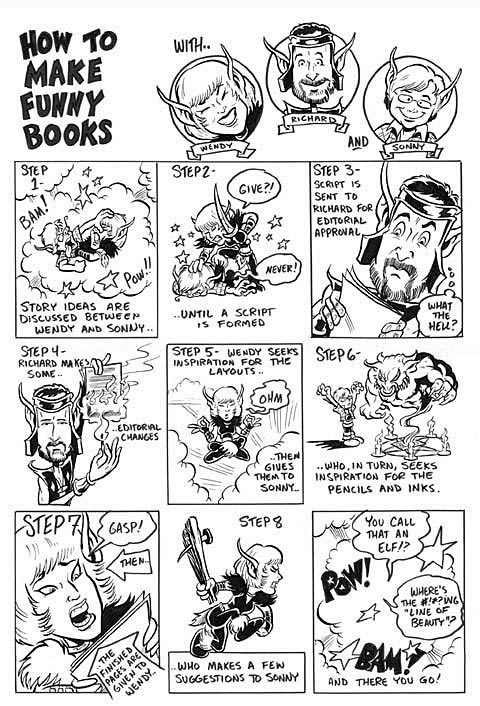 And on that note, until next time…
Much Love,