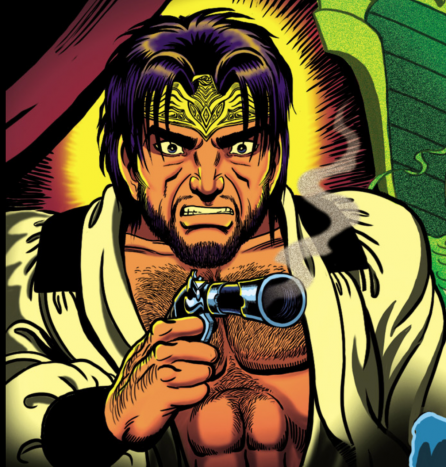 Ruthless, cold hearted and dominating, Angrif would have made his father proud, if he hadn’t killed him first. At a young age, he proved his mettle by killing his sister, Gifa, who had been sent to find Ember and her Wolfriders at Howling Rock. He used both murders to his advantage, weaving lies around each of them.

Angrif swore to destroy all elves and capture the healer, Mender, and employed the elf hunter, Lehrigen, to track his quarry down. Betrayed by Angrif’s men, however, Lehrigen joined forces with their mutual enemy, the elves, and stymied his plans.

Years later, having regained some of the former power possessed by his father, Angrif continued his quest for dominance. Convincing the Longrider humans that he meant to help them rid themselves of “the mountain demons,” he led an attack on their city near Ember’s Wolfriders’ Holt, enslaving those he could use and killing all those, including children, who were of no use to him.

During his raid on the village, Angrif was severely wounded by Krim, who gleefully took advantage of the chaos to join the battle and castrate him. Ember ordered the Wolfriders to retreat from Angrif Djun’s troops, and, stunned by Recognition in that very moment, she surrendered to his guards to protect her tribe, especially her Recognized, Teir. Mender killed Angrif’s eldest son, Lodok during the battle. Angrif then sent his second son, Rathol to pursue the elves. Rathol would meet his own end as a result, leaving Angrif with no heirs and thanks to Krim, no way of producing new ones.

Angrif did not live to see the destruction of the elves. After a decade of suffering, during which he poured all of his resources into building a massive war fleet and an arsenal of guns to finally destroy the elves, he succumbed to wound inflected by Krim. His skull was hung on the lead warship, and his vendetta carried on by his Commander of Sea and War.