Another Howl for Skot

I’ll bet you didn’t know that one of our elves is named after a human being – really and truly! This human being was a very quiet, very private person. Comics were not his thing. He never read Elfquest or talked to me about the characters or story. But he was always interested in how Richard and I were doing…always solicitous about our ups and downs…always rooting for the movie. He really enjoyed movies, particularly film noir. He also happened to be gay, but not “way out there” gay.

This human being, although quite shy with people, loved animals – especially dogs. And the dogs helped him relate to his neighbors. He greeted them and chatted with them during the long walks he took. And they appreciated that. His crowning achievement was the renovation of a gorgeous, Victorian house in San Francisco. He took something in need of rejuvenation and, with great care, brought it back to vibrant life.

This human being was my brother Scott, who passed away over the Thanksgiving Holidays. On the surface he was, in every way, the opposite of our wild and woolly Go-Back elf. Yet I have always enjoyed thinking that the elfin extrovert Skot was everything outside that my brother preferred to keep inside.

Devastated by the loss of two beloved dogs in a row, Scott volunteered his time and help at a local animal shelter, where he adopted two more: Trinity, a chow mix, and Alfie, a Tibetan terrier (his favorite breed). Everyone knows how much courage that takes – to love again after loss.

The elfin Skot went out exactly the way he wanted to in the Shards storyline, and we all howled for his heroic end. I am calling now for one more howl for his namesake, my gentle brother Scott, who was the hero of his own story. 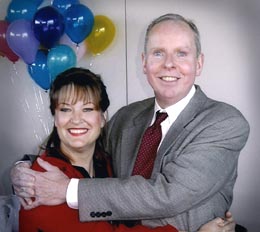