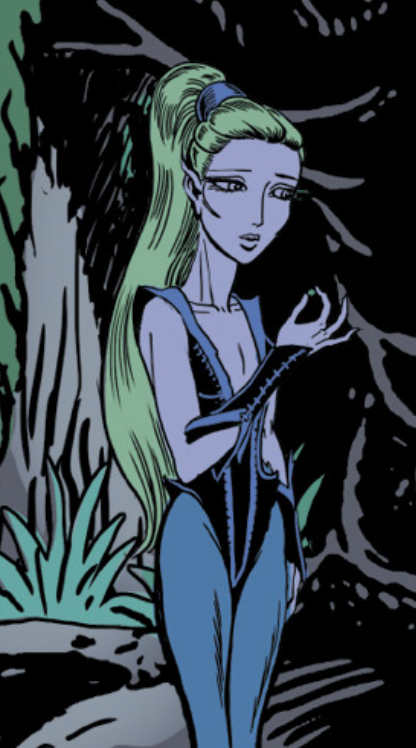 Aroree was one of the Chosen Eight, the Gliders’ hunters and providers. Alone among her people, Aroree’s eyes were opened to a wider world by their encounter with the Wolfriders—especially the stargazer, Skywise. She saw in him a spark, missing from her life, but their brief relationship was cut short when Lord Voll usurped Cutter’s quest and got himself killed.

Later sent by Winnowill to recover Preservers from the Forbidden Grove, Aroree inadvertently strayed into the Wolfriders’ territory. Brought to their holt by Skywise, her desire to flee Blue Mountain led her to kidnap Windkin. By presenting the infant to Winnowill as her own replacement, Aroree hoped to buy her freedom. Kureel attempted to detain her; Aroree gutted him to make her escape and went on a pilgrimage to the Palace of the High Ones at Skywise’s urging but fled in fear at the ongoing warfare between the Go-Backs and trolls before she could reach the ancient dwelling.

Aroree then sought to return to Skywise, her only friend and comfort in the world. Finding the Wolfriders at Thorny Mountain Holt, she learned that Rayek had whisked Skywise into the distant future. There she stayed, waiting out the centuries and bravely entering the suspended animation of a preserver cocoon with the rest of the Wolfriders, despite her inability to dream after centuries of mental domination under Winnowill in Blue Mountain. Instead, she visited the dreams of the sleeping Wolfriders, and in doing so became privy to Cutter’s anguish and inability to experience the “now” after losing his family. Ultimately reunited with her “little love” Skywise, they spent several years of peace before being separated again during the war for the Palace’s shards.

After the Palace’s reconstruction, she accompanied Venka on a search to find Kahvi, hoping to learn the fates of Door and Tyldak, the last of her Blue Mountain kindred. She lived with the Go-Backs, who revered her as an elder, serving as a scout under Venka’s leadership, and struck up a dalliance with Windkin.

Aroree eventually followed the Go-Backs in answer to Sunstream’s call to return to the Palace. She spent several years living in Wolfriders Father Tree Holt but ultimately chose to become one of the New High Ones who left the World of Two Moons and returned to the Star Home.