One of the greatest things about ElfQuest is that Wendy and Richard Pini take the time to weave an amazing level of detail and plot into each issue–even in the background art. Over the years so much that isn’t necessarily a part of the main story arc, and could easily be skipped, can be seen by paying close attention to what’s happening in the background. Often these moments are used tell us more about the characters’ relationships and personalities. This is one reason reading ElfQuest is such a rich experience.

Wendy says, “It’s a necessary story-telling device for ElfQuest, in particular, because we have so many characters which the readers know and love and want to see more of. Not every single one of them can have dialogue and a significant plot line, so information about them has to come in visual cues.”

Here are ten of the best bits of wonderfulness from the backgrounds in ElfQuest.

Pike Gives Shenshen Flowers
When Leetah left the Sun Village with the Wolfriders in Original Quest #9, her little sister Shenshen was beside herself with concern that she might never see her sibling again. It was a revealing moment for Shenshen as a character; it was the first time we saw more depth to the otherwise giggling and gossiping villager. The sweet moment came in the background when Pike noticed her sadness, and on the next page offered her a bouquet of flowers to cheer her up. 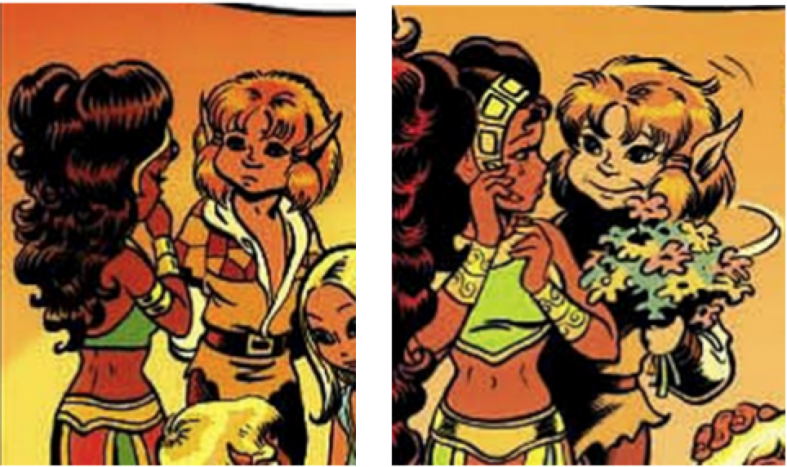 Venka Meets Teir
Venka greets her half-brother Teir in Final Quest #10. It may or may not be their first meeting, and it’s not critical to the moving forward of the plot, but Wendy and Richard included it in the background, connecting the storylines of Venka and Teir as further fruition of the major revelation that Teir is Kahvi’s son. 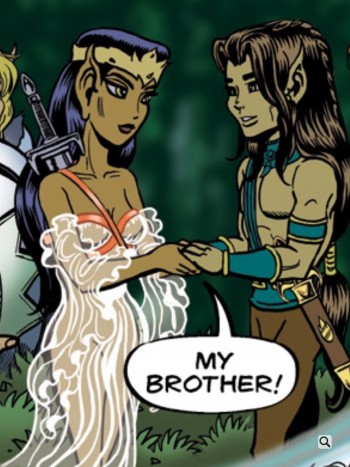 Skywise’s Child Spotted in Go-Back Lodge
In Hidden Years #2 we learned that Skywise fathered at least one child, Yun, during his shenanigans with Go-Back maidens before the war against King Guttlekraw for the Palace of the High Ones. But long before Yun was formally introduced we can see a child that is clearly Skywise’s in the Go-Back’s lodge in Kings of the Broken Wheel #1. Is it Yun, or perhaps another of the silver-haired stargazer’s kids? 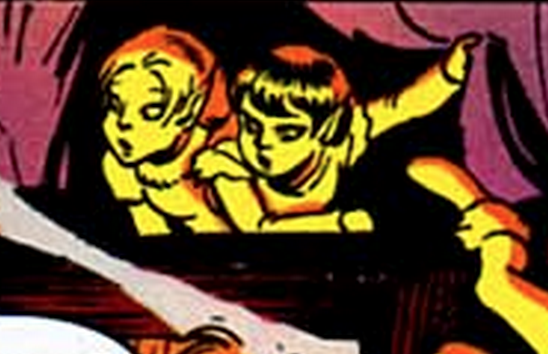 Rainsong Greets Pike
The fact that Pike and Rainsong are half-siblings isn’t a detail ever stated directly in the comics. Instead, readers had to put two and two together. Rainsong reveals she’s Rain’s daughter in Original Quest #9, but even before that both their matching names and hat styles were a clue to their relatedness. Pike was revealed to be Rain’s son in the first Blood of Ten Chiefs novel, but again, the clear family resemblance in character design was hard to miss. These are both great examples of the type of visual storytelling clue that Wendy regularly weaves into the art.

Astute fans were able to make these connections, and Richard confirmed that these two Wolfriders were brother and sister in the letter pages of the issue #24 of the Marvel reprints of the Original Quest.

Later, in Kings of the Broken Wheel #4 you can see Rainsong greeting Pike after a three year separation in this tiny background panel. 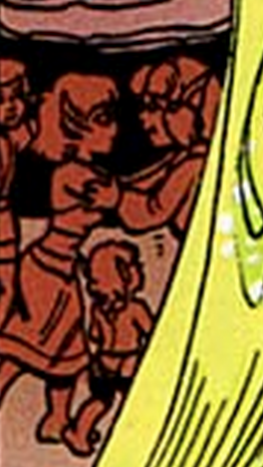 Serrin Born After Kahvi’s Attack
In Hidden Years #2 we learned that Wing Recognized the Sun Villager Behtia. We also learned that Behtia was very close to giving birth. The events of the issue were focused on Kahvi’s attack on the village in an effort to get the Little Palace for the Go-Backs, but on the last page we saw Wing running up to his healer brother Mender. Only the impending birth of his daughter Serrin could inspire the look of joy and excitement on Wing’s face right after a battle.

Treestump Gives Dewshine Trollhammer’s Pelt
Treestump discovered that Guttlekraw’s troll warriors killed his daughter Dewshine’s wolf-friend Trollhammer in Original Quest #19.  Later in the issue, if you pay close attention to the background, you see he’s brought the loyal wolf’s pelt as a keepsake when he broke the news to his golden-haired daughter. 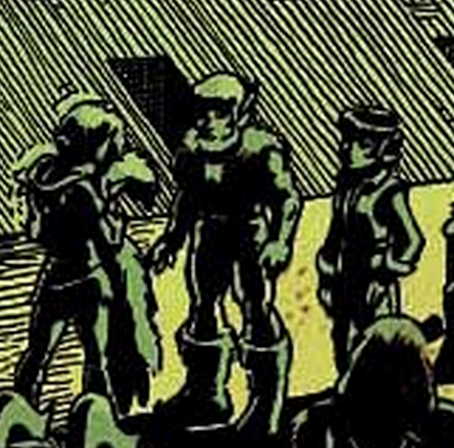 Nightfall Braids Redlance’s Hair
One of the most beautiful things about ElfQuest is the love shown between partners, whether they be lovemates or lifemates. Quiet moments of tenderness, however mundane, make ElfQuest great. Careful readers spotted one such moment between Nightfall and Redlance in Final Quest #3. 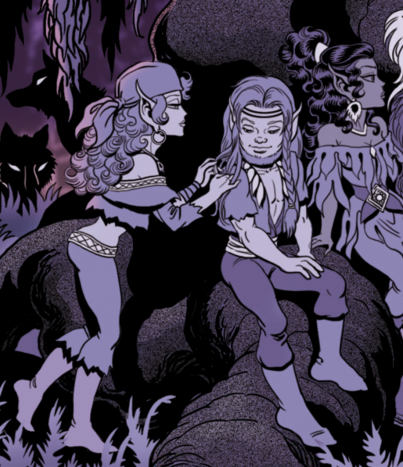 Moonshade’s Friendship With Rainsong
Though it’s never been explicitly said, if you pay close attention to the story being told in the background panels, you discover that Moonshade had a close friendship with Rainsong. It makes sense, given that both are gentle types as far as Wolfriders go. The first clue to their friendship was in Kings of the Broken Wheel #4, when we saw Rainsong specifically greeting her old friend when the Wolfriders first returned to the Sun Village. Later, in the Wolfrider story, we saw more evidence of this friendship. 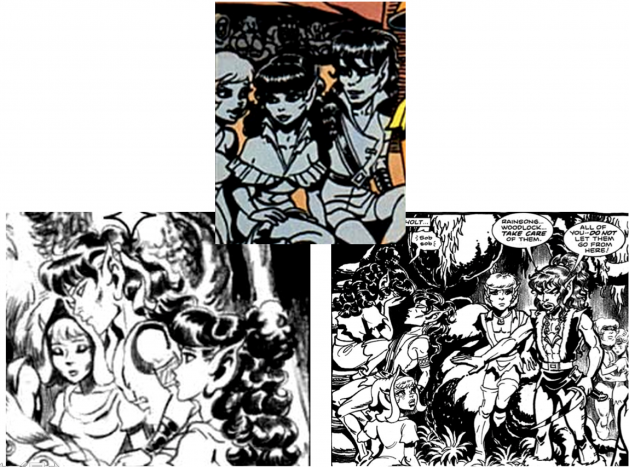 Treestump and Clearbrook Sit Out Dance With the Go-Backs
When the Wolfriders and Go-Back’s shared a “dance” celebrating life before their first battle against the trolls in Original Quest #17, Clearbrook, freshly grieving for her slain lifemate One-Eye, didn’t participate in the lovemaking. Fellow elder Treestump stood by her side then, comforting her in a bit of foreshadowing for their eventual relationship. 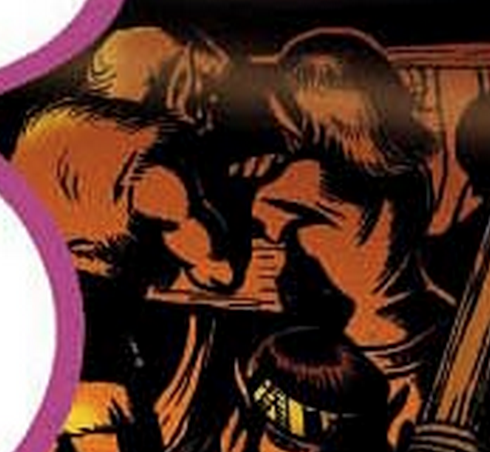 Minyah Lives!
The Sun Folk’s master gardener Minyah only ever had one scene in which she had a speaking part, in Original Quest #5. Yet she appears in the background throughout the 37-year long ElfQuest saga, from the Original Quest all the way up to the Final Quest. Her signature woven hat gives her away every time. It’s nice to know that such a minor background character hasn’t been forgotten.

What other hidden gems have you found in the backgrounds of ElfQuest? Let us know in the comments below.