San Diego Comic-Con International 2016 is a wrap. As always, it was a whirlwind of excitement, sights, sounds and crowds. With Wendy and Richard Pini participating in panels and doing signings at both the Dark Horse Comics booth as well as at the Flesk Publications booth, ElfQuest was well-represented.

For those of you who couldn’t be there in person, here’s a recap of the adventure.

Things kicked off with a panel put on by Comic Book Legal Defense Fund called “She Changed Comics” featuring Wendy and other pioneering women in the comics biz. Each of the panelists talked about their experiences creating successful careers in the male-dominated comics industry. Pictured here with Wendy are moderator Betsy Gomez and panelists Caitlin McCabe, Ramona Fradon, Lee Marrs, and Casey Gilly. 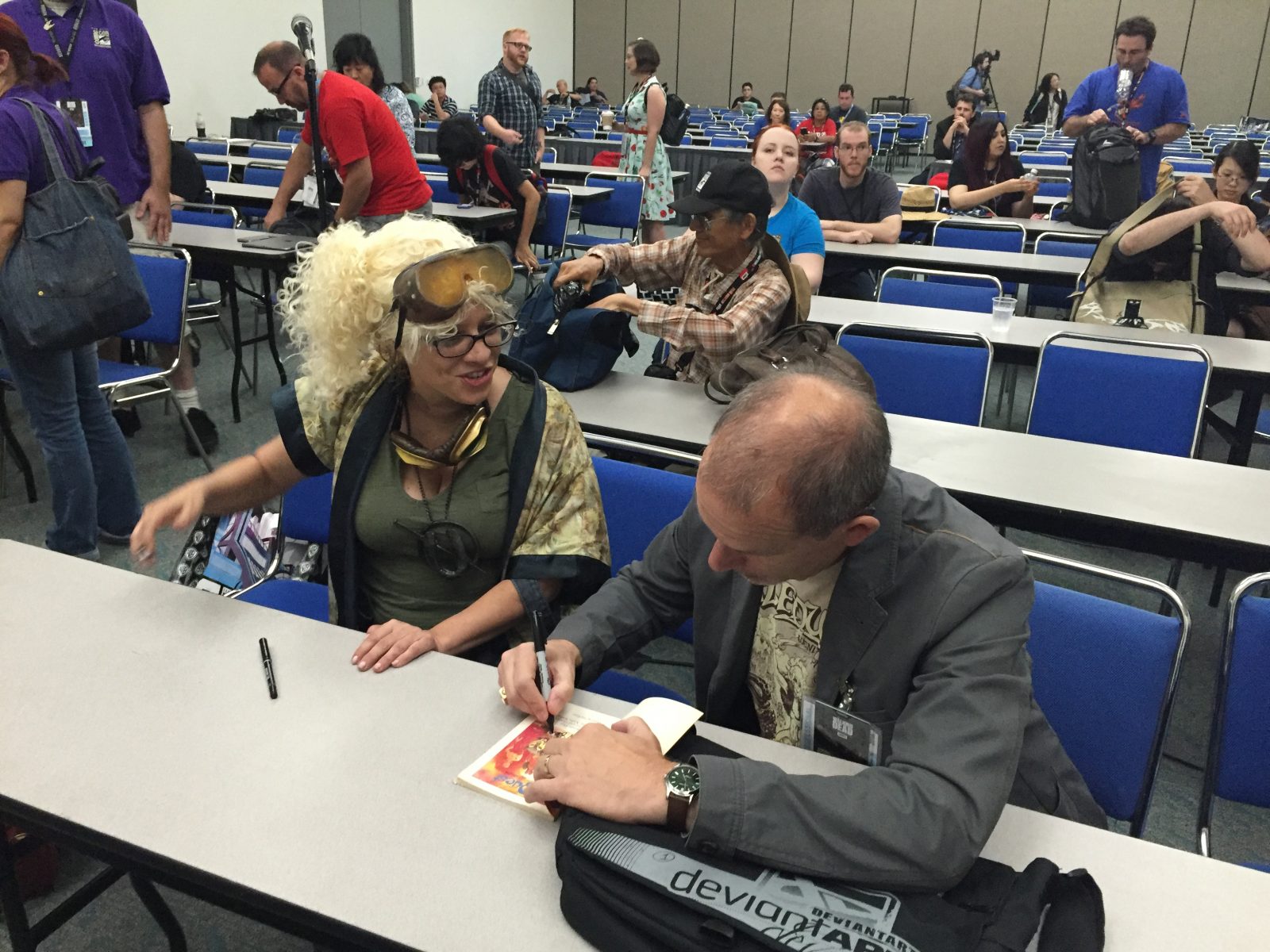 While Wendy was on stage for the panel, Richard was not idle. Here he is just after the panel concluded signing a book for an enthusiastic fan who was inspired by ElfQuest to study astronomy and who ultimately went on to do work with NASA. 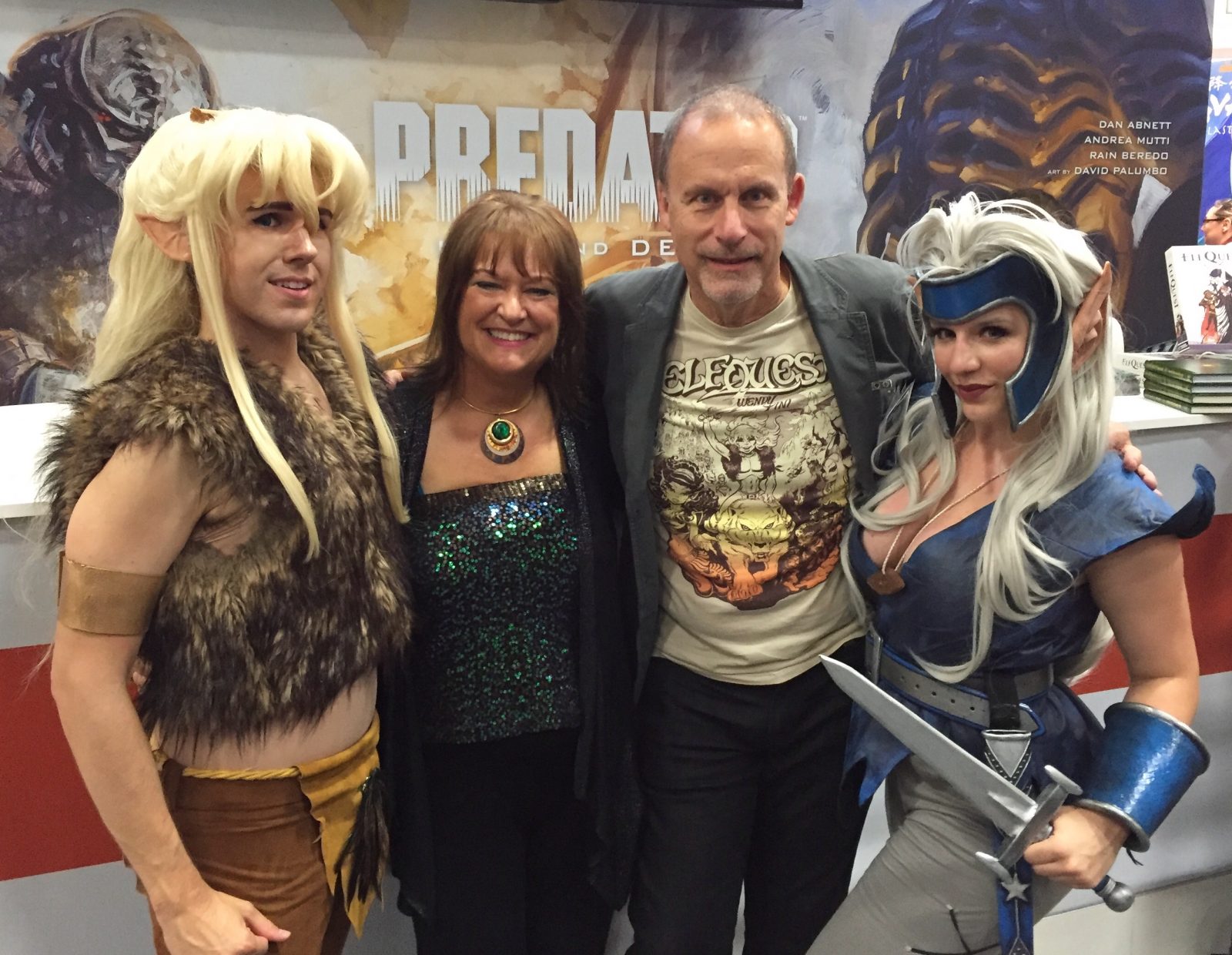 Then it was off to the Dark Horse Comics booth for a signing where Wendy and Richard got to take some pics with Cutter and Skywise. These spectacular cosplayers are Jimmy Sherfy as Cutter and Amber Malinski as Skywise. 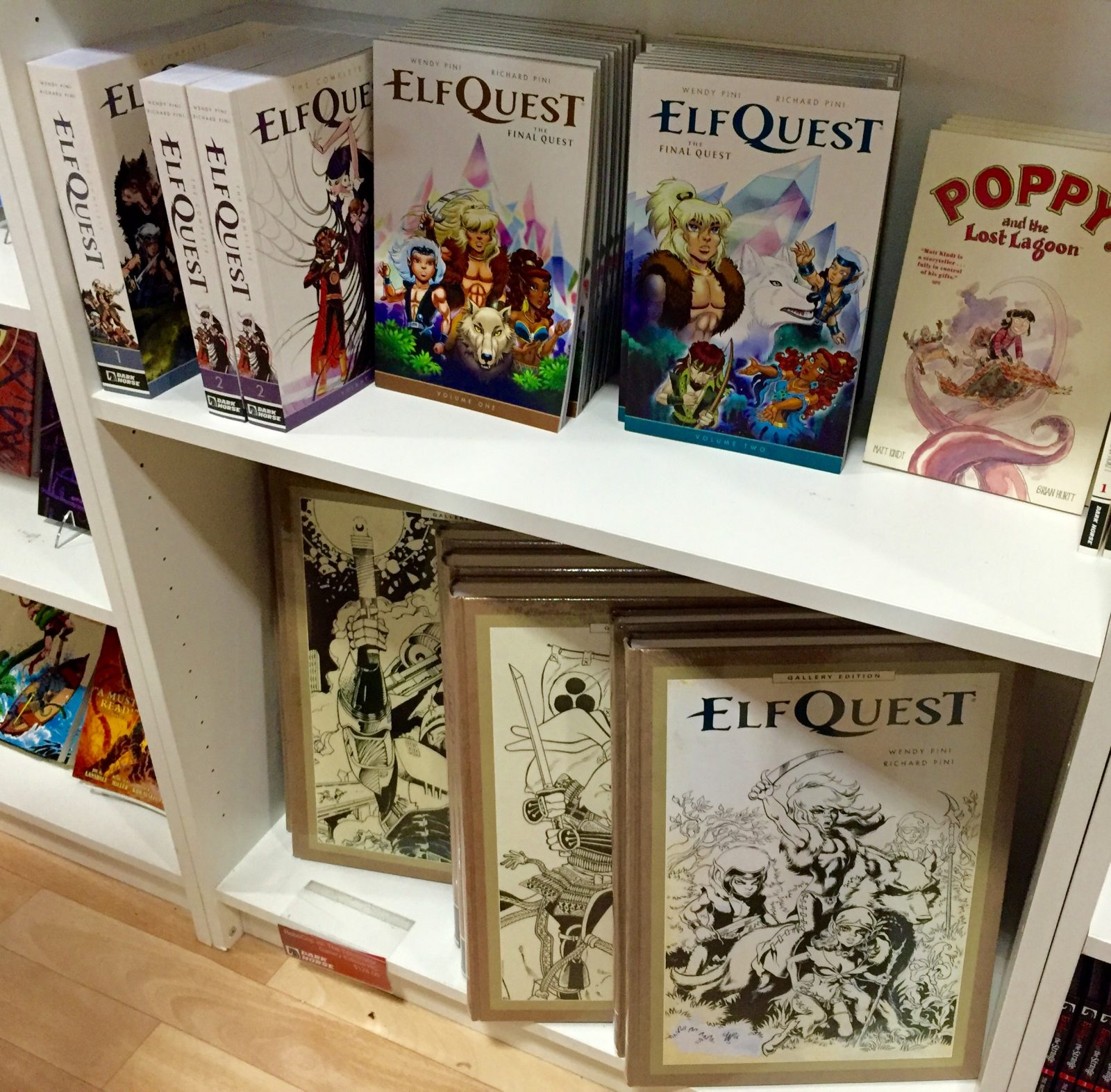 The Dark Horse Comics booth had no lack of ElfQuest books. Not pictured above are the individual Final Quest comics, which were on another rack. 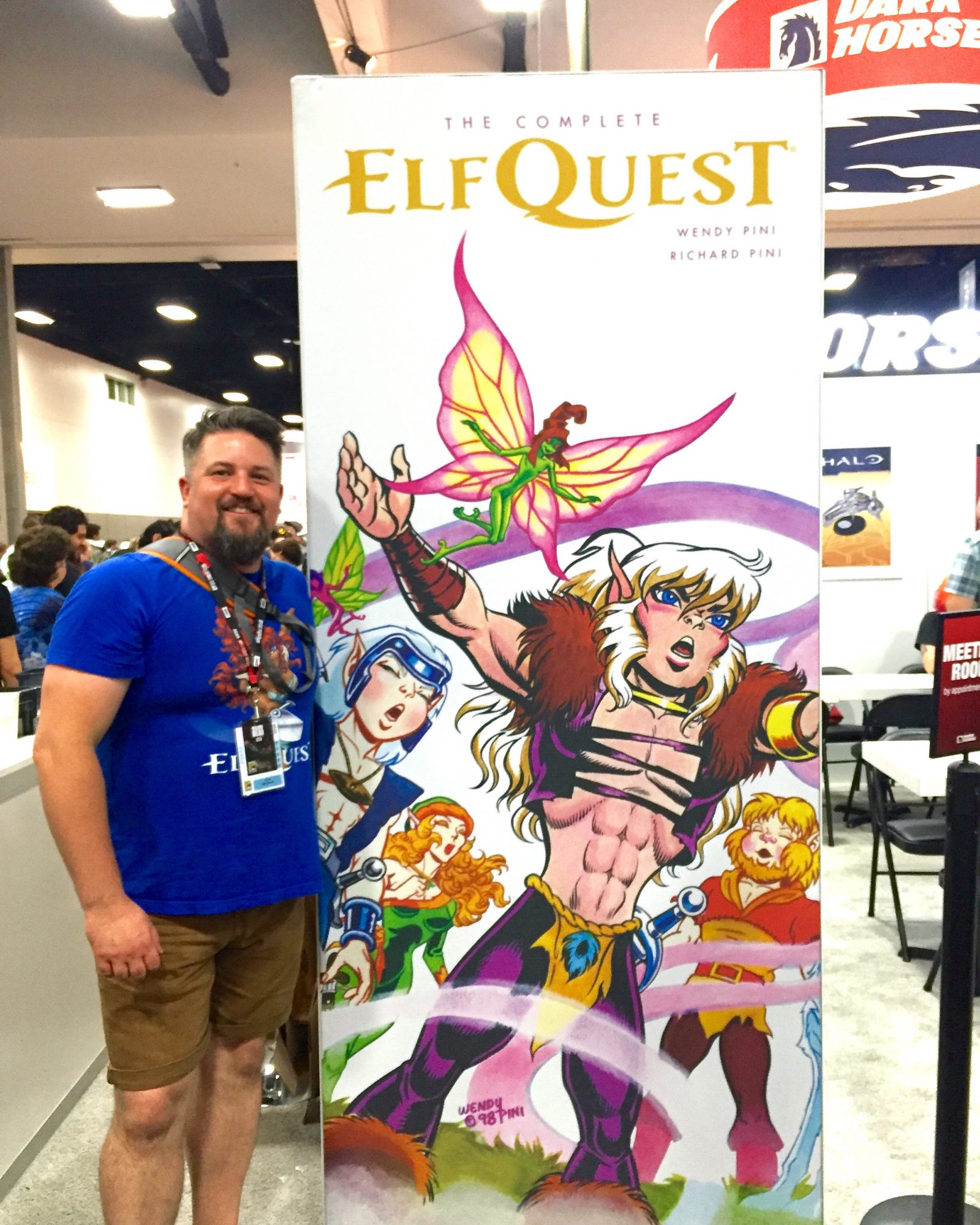 Yours truly next to an awesome giant banner at the Dark Horse Comics booth. This is the cover of Volume 3 of the Complete ElfQuest omnibus graphic novel series that Dark Horse is publishing. It will collect stories from the Hidden Years and Dreamtime storylines and will be available November 2016. 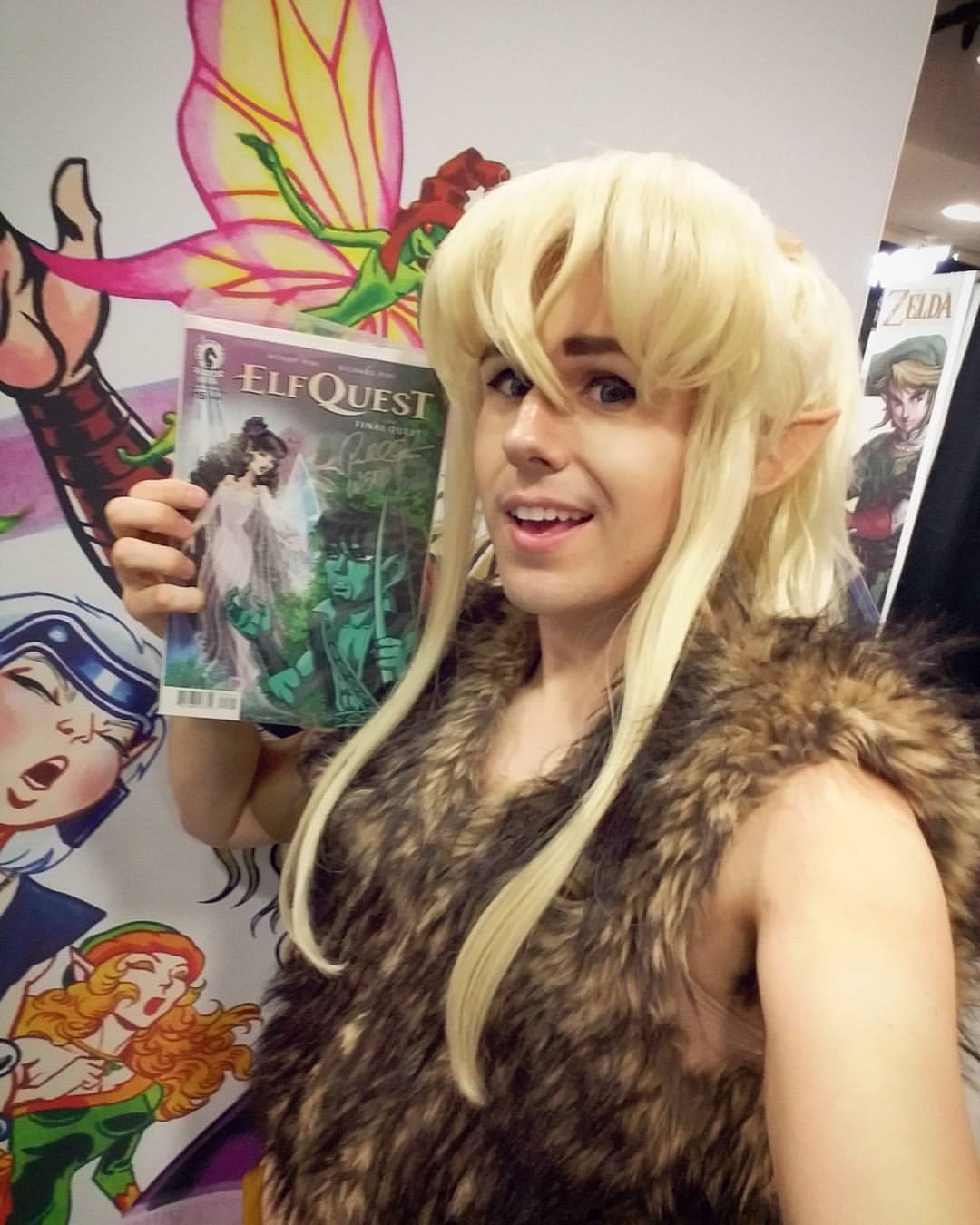 Dark Horse didn’t have any ElfQuest exclusives for Comic-Con this year, but they did bring copies of issue #15 of the Final Quest, which isn’t available to the public until later this week (Wednesday July 27, 2016). Cosplayer Jimmy Sherfy posted this pic with his copy, causing ripples of jealousy from ElfQuest fans across the world who couldn’t be at Comic-Con to get their issue a few days early. 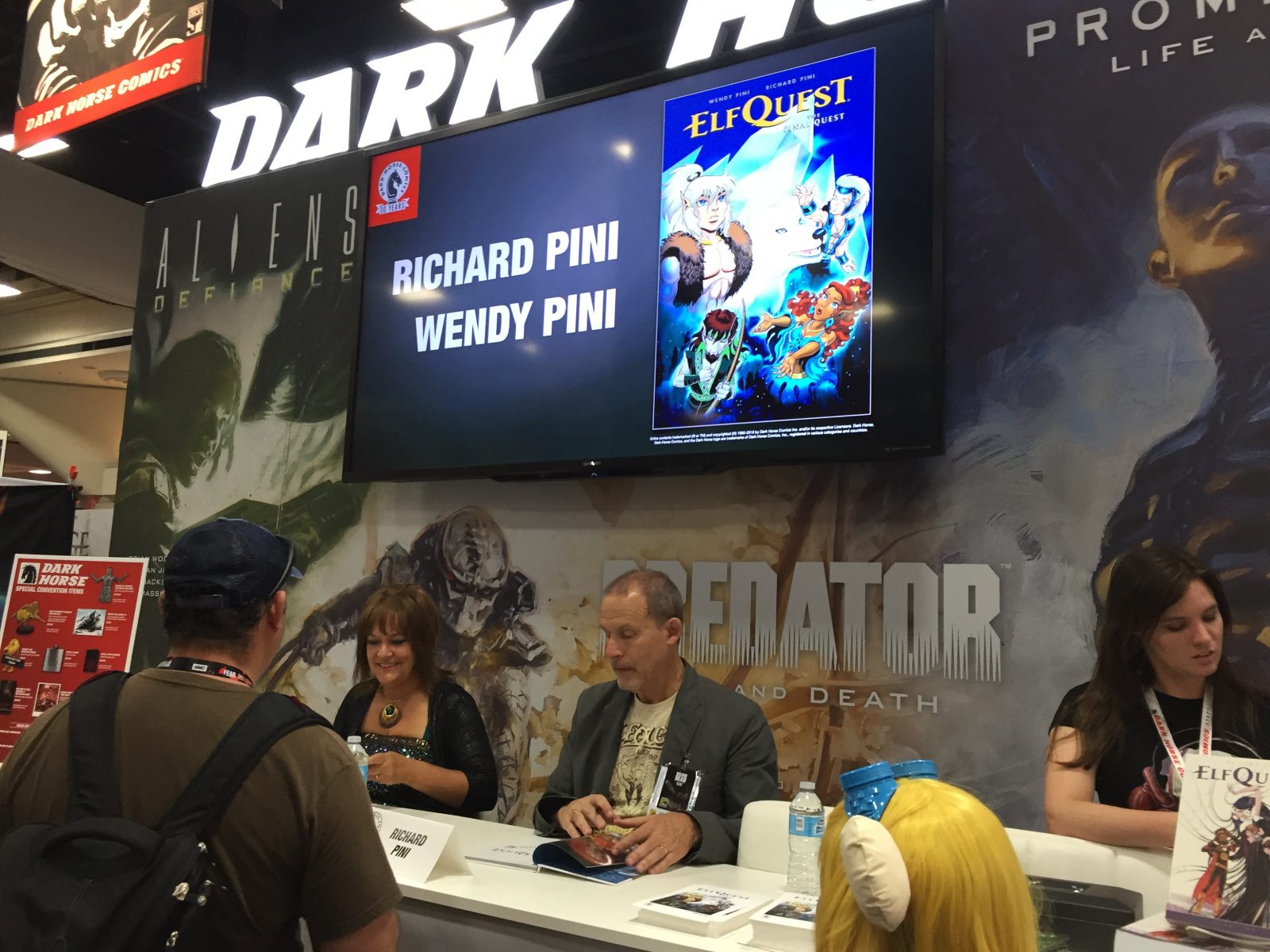 Dark Horse, as always, took great care of Wendy and Richard, coordinating the details of selling books and managing the crowd so that Wendy and Richard could focus on interacting with the fans and signing books. 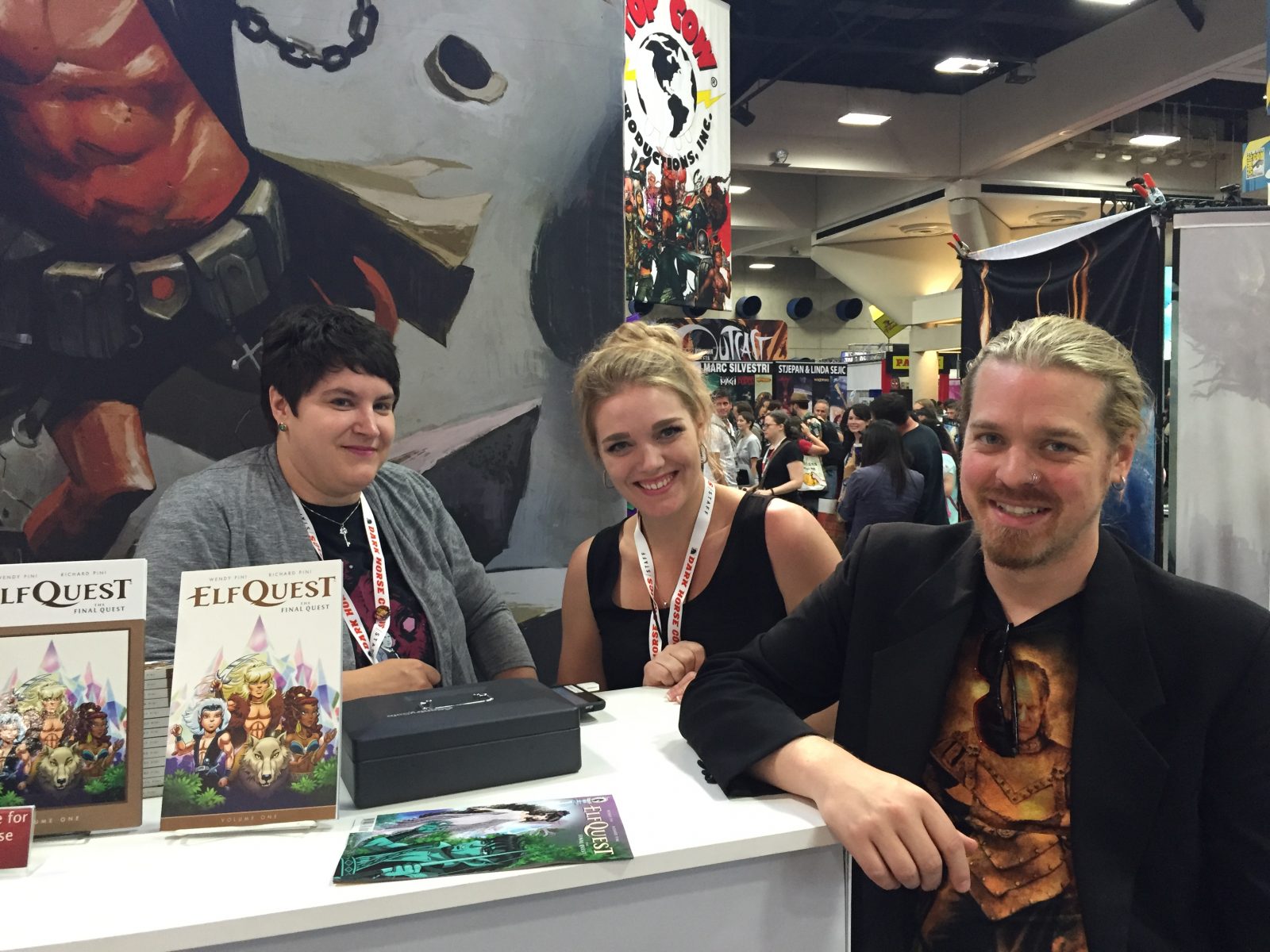 Speaking of Dark Horse, here are just a few of the fabulous Dark Horse folks manning the booth, coordinating the logistics of Wendy and Richard’s signings, and working behind the scenes to promote ElfQuest. Pictured here left to right are Hannah Means-Shannon, Melissa Lomax and Aub Driver. 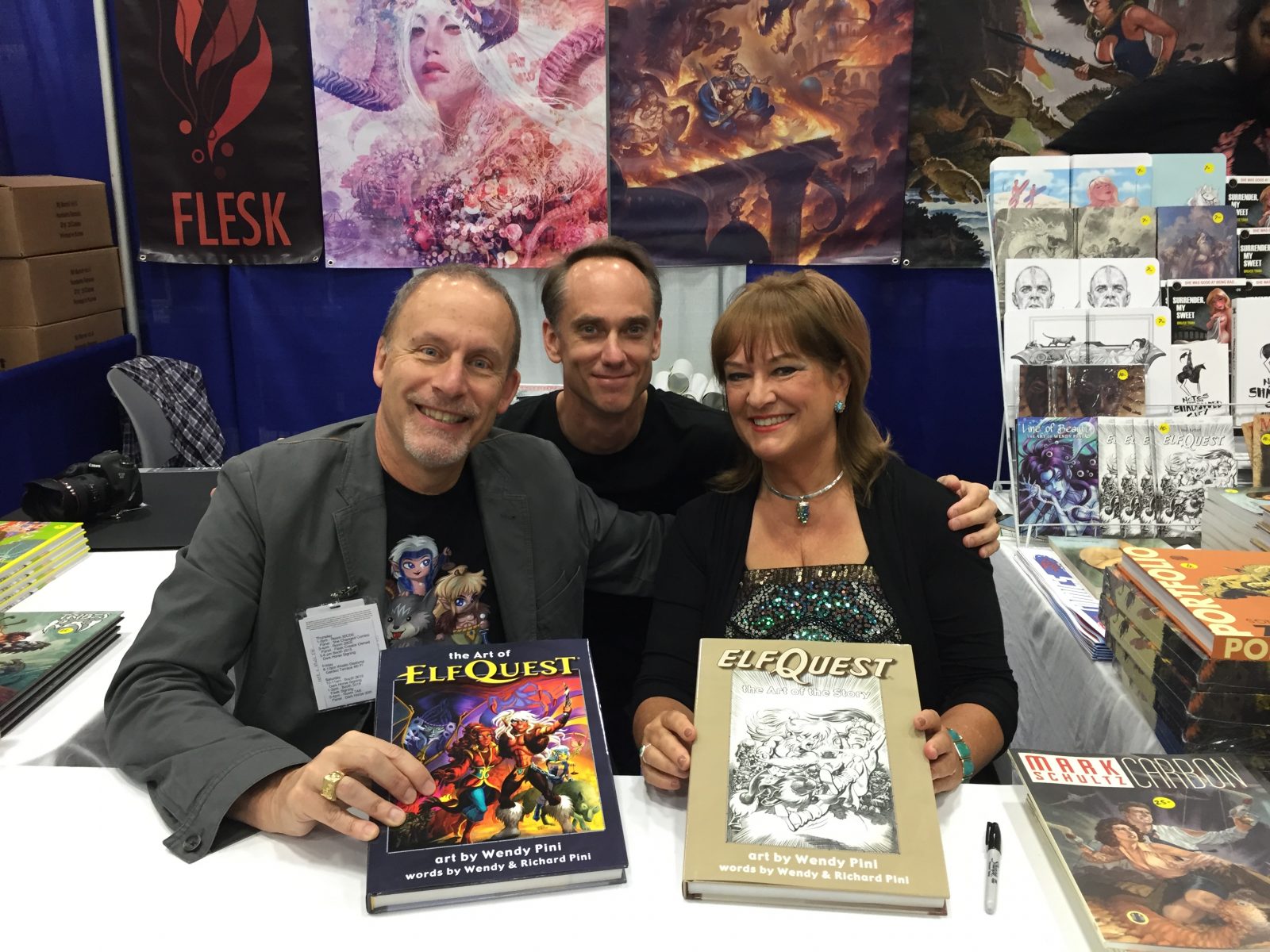 Wendy and Richard also made an appearance at the Flesk Publications booth to sign copies of the fabulous Kickstarter-funded art books published by Flesk. Here they are with John Fleskes himself. 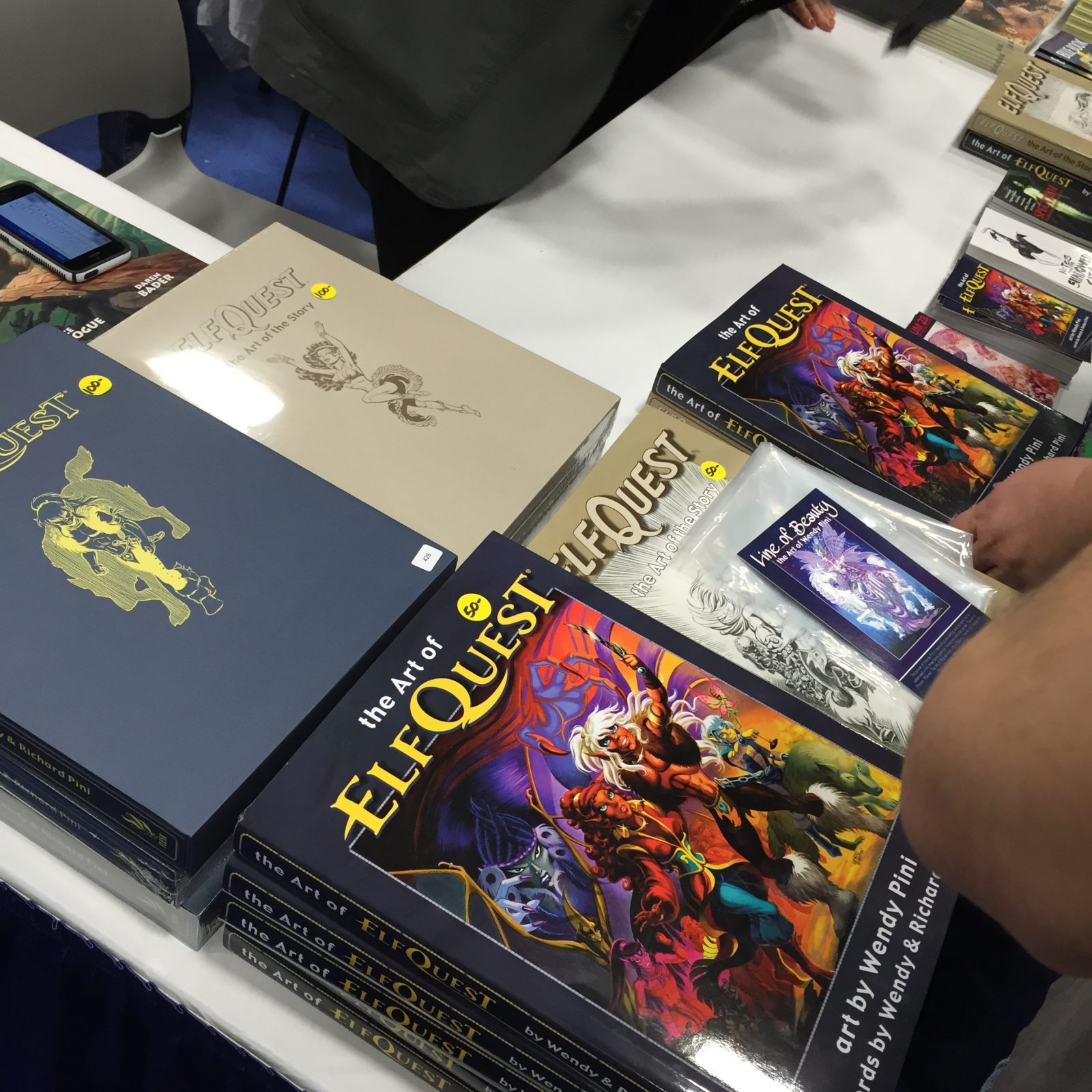 The goods at the Flesk booth: both the trade and deluxe editions of the Art of ElfQuest and ElfQuest: The Art of the Story, the small teaser booklet announcing the coming of the art books, and free ElfQuest postcards. The third book, The Line of Beauty: The Art of Wendy Pini is currently in progress and is scheduled to ship in December of 2016. You can pre-order it or order any of these fine books directly from Flesk Publications. 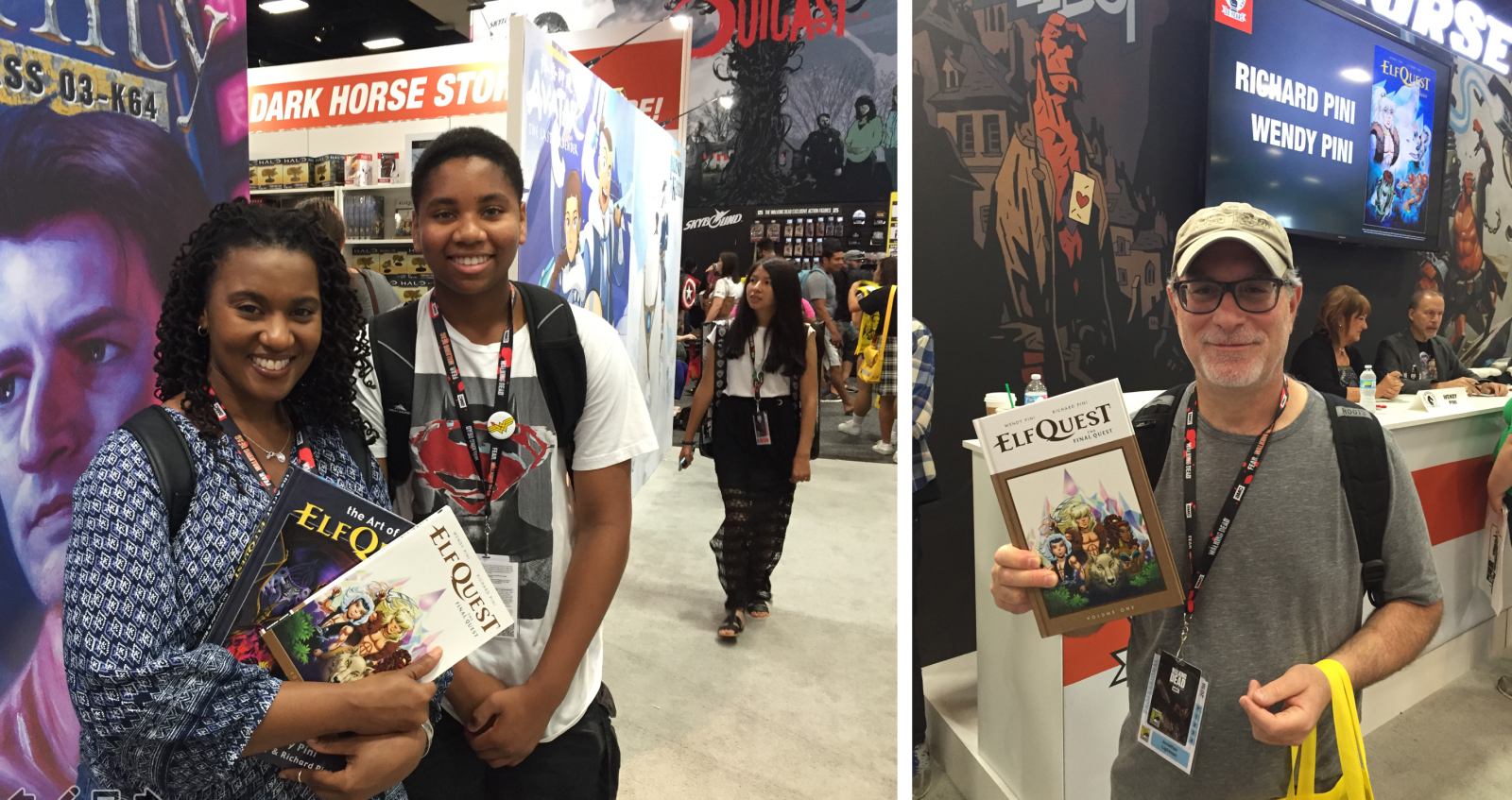 These are just some of the wonderful ElfQuest fans that came to the signings at the Dark Horse and Flesk booths. There were happy faces all ’round! 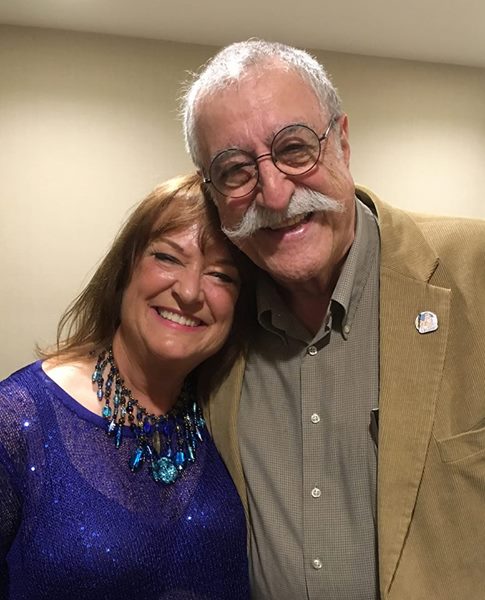 It’s not just fans who attend Comic-Con. Wendy and Richard got to reconnect with many of their long-time professional friends, like Sergio Aragones, creator the long-running comic series Groo. 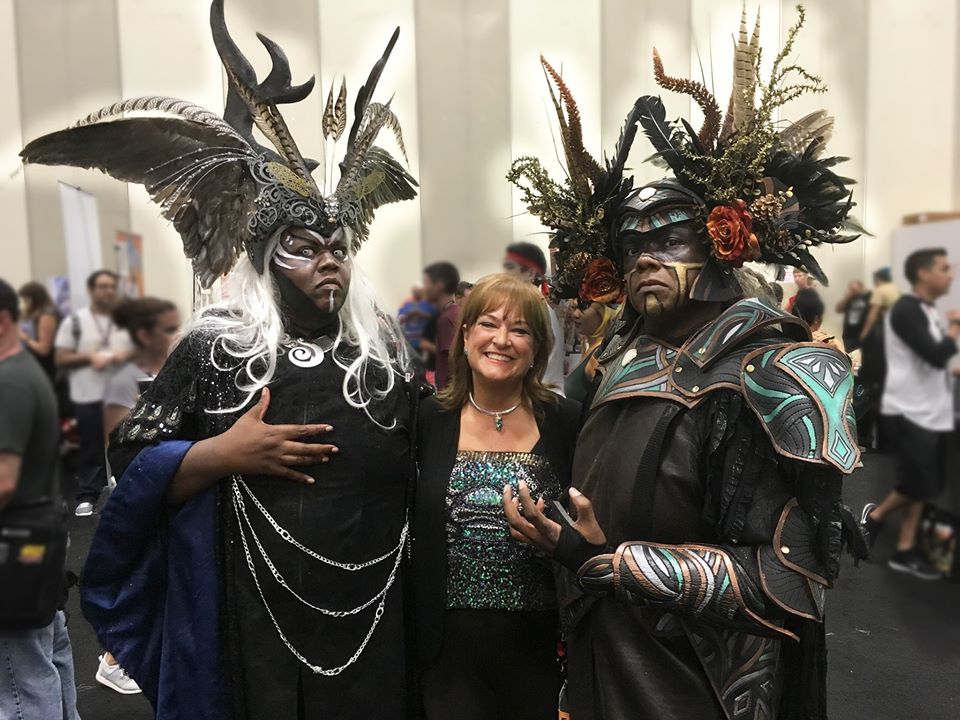 We also ran into Joe Phillips and his brother Lex Wolfcraft. Joe is not only an incredible artist, he and Lex are first-class cosplayers too. Here they are dark versions of the fairy king Oberon. Wendy knows good cosplay when she sees it, and her expression here leaves no doubt what she thought about the guys’ outfits.

But the most dramatic connection with old friends happened when we ran into Peter David. Richard explains:

In 2004, Peter David (prolific and talented soi-disant “writer of stuff“) issued a Comic-Con challenge on behalf of the Comic Book Legal Defense Fund that resulted in his getting a tattoo of Leetah on his arm. His wife Kathleen joked that she should get a matching Cutter. Wendy proceeded to sketch the Wolfrider chief on Kathleen’s arm but for reasons, the art never got permanently inked … until now. A dozen years later, Wendy recreated the sketch last night at dinner (and didn’t that draw stares at the restaurant) and Peter and Kathleen now have a matched set of Elfquest tattoos! 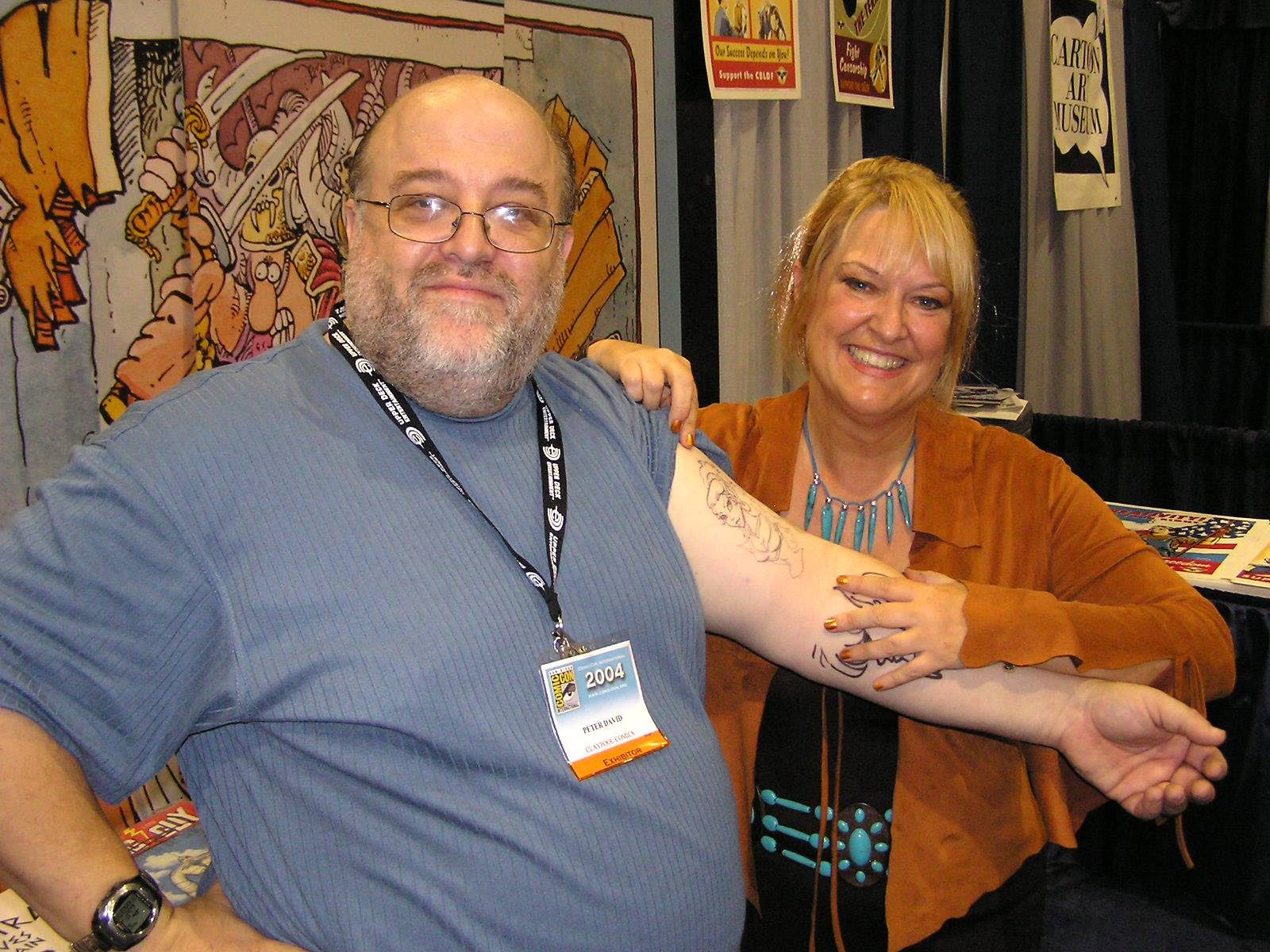 Here’s Wendy and Peter back in 2004 when she drew Leetah on his arm, which was then made permanent by a local San Diego tattoo artist as part of the aforementioned challenge.

Here’s what happened this year. 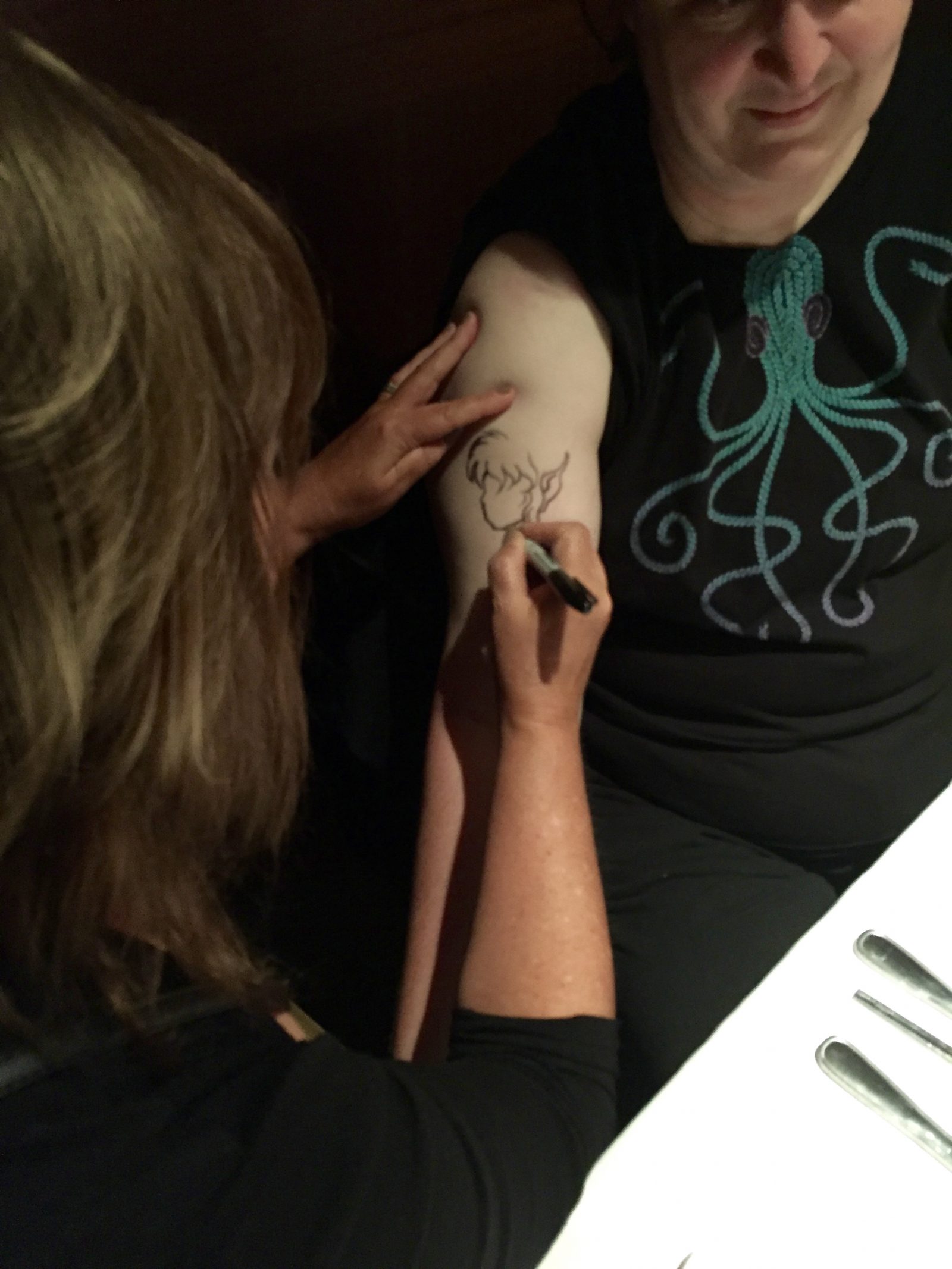 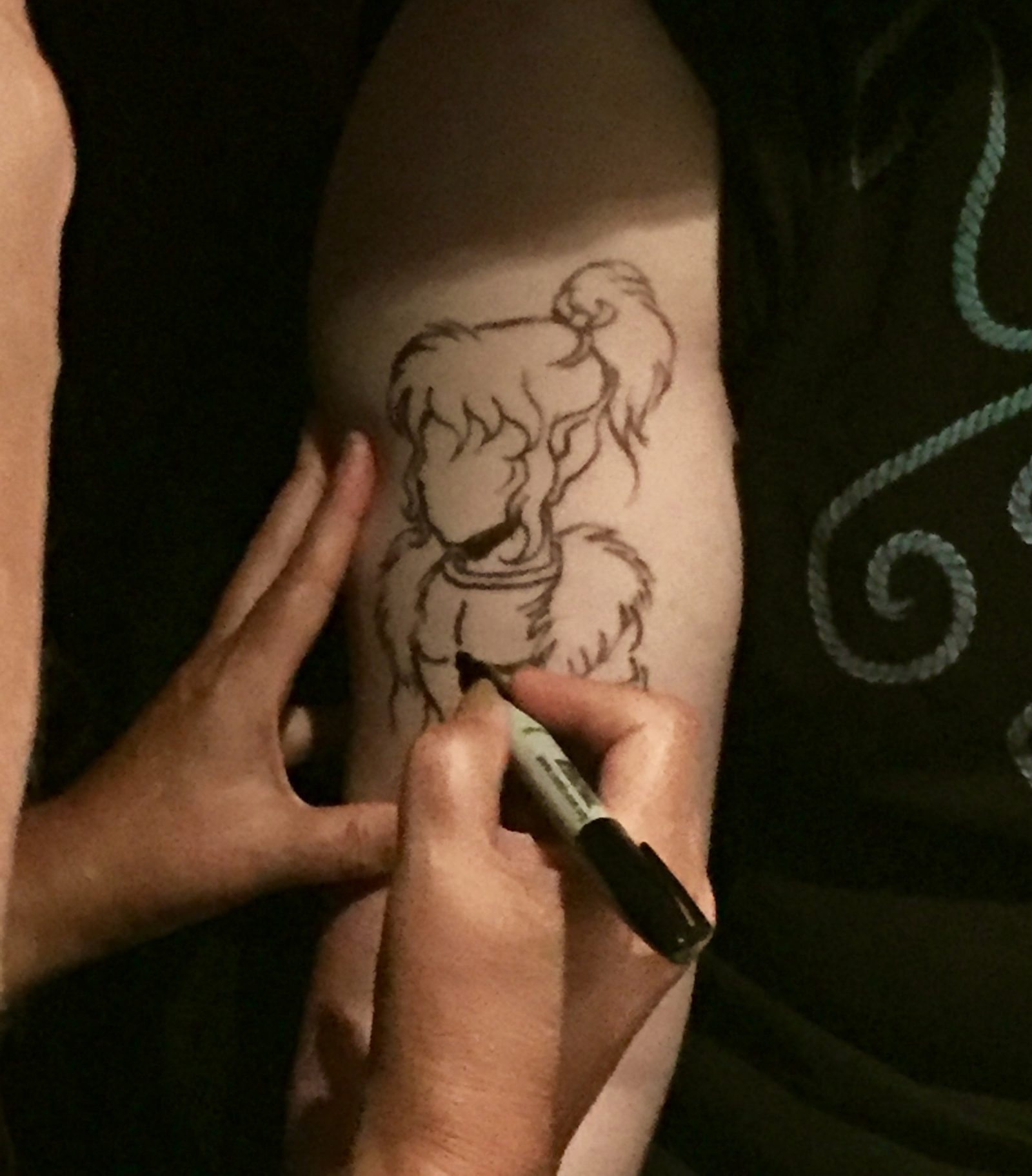 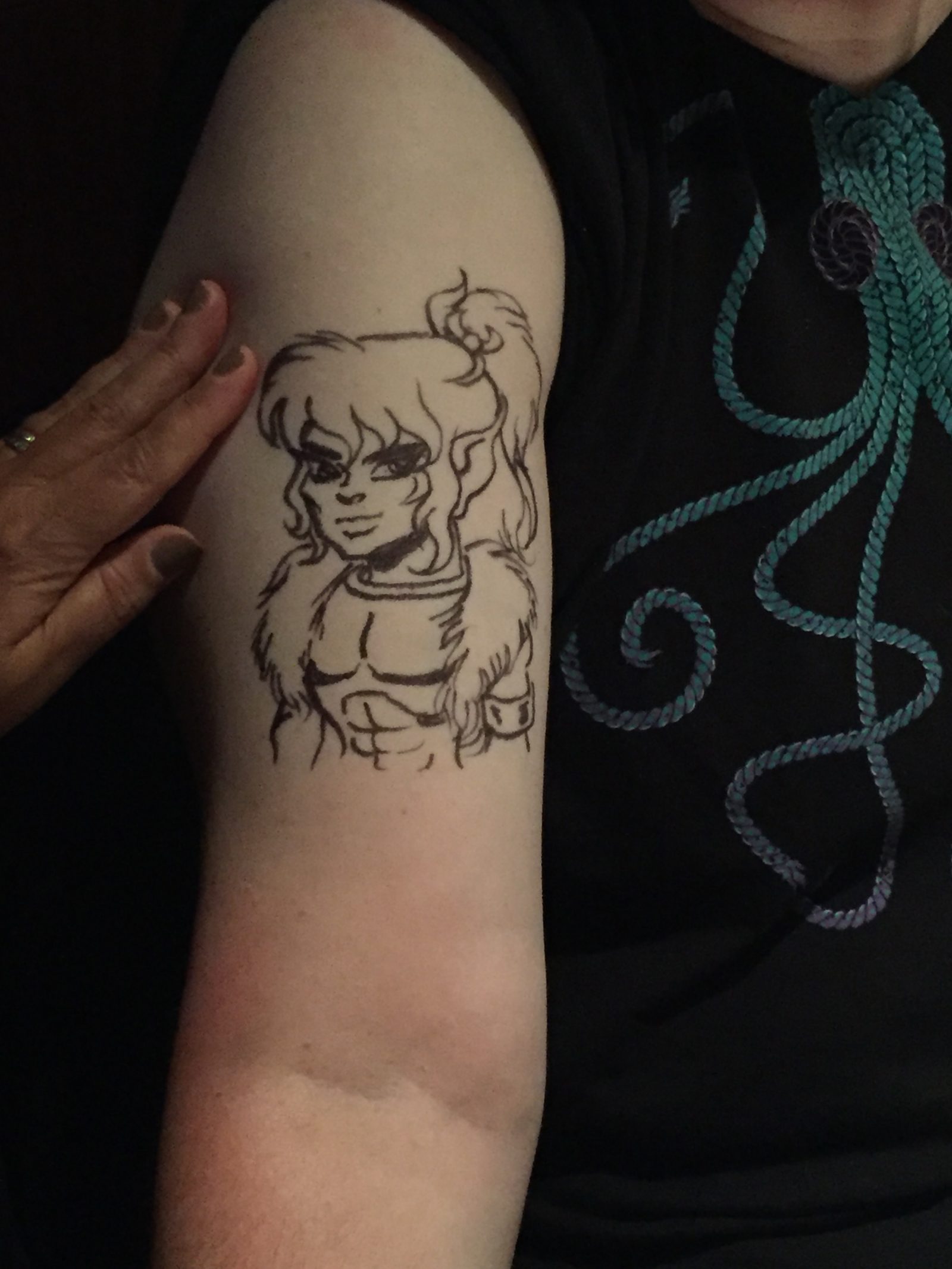 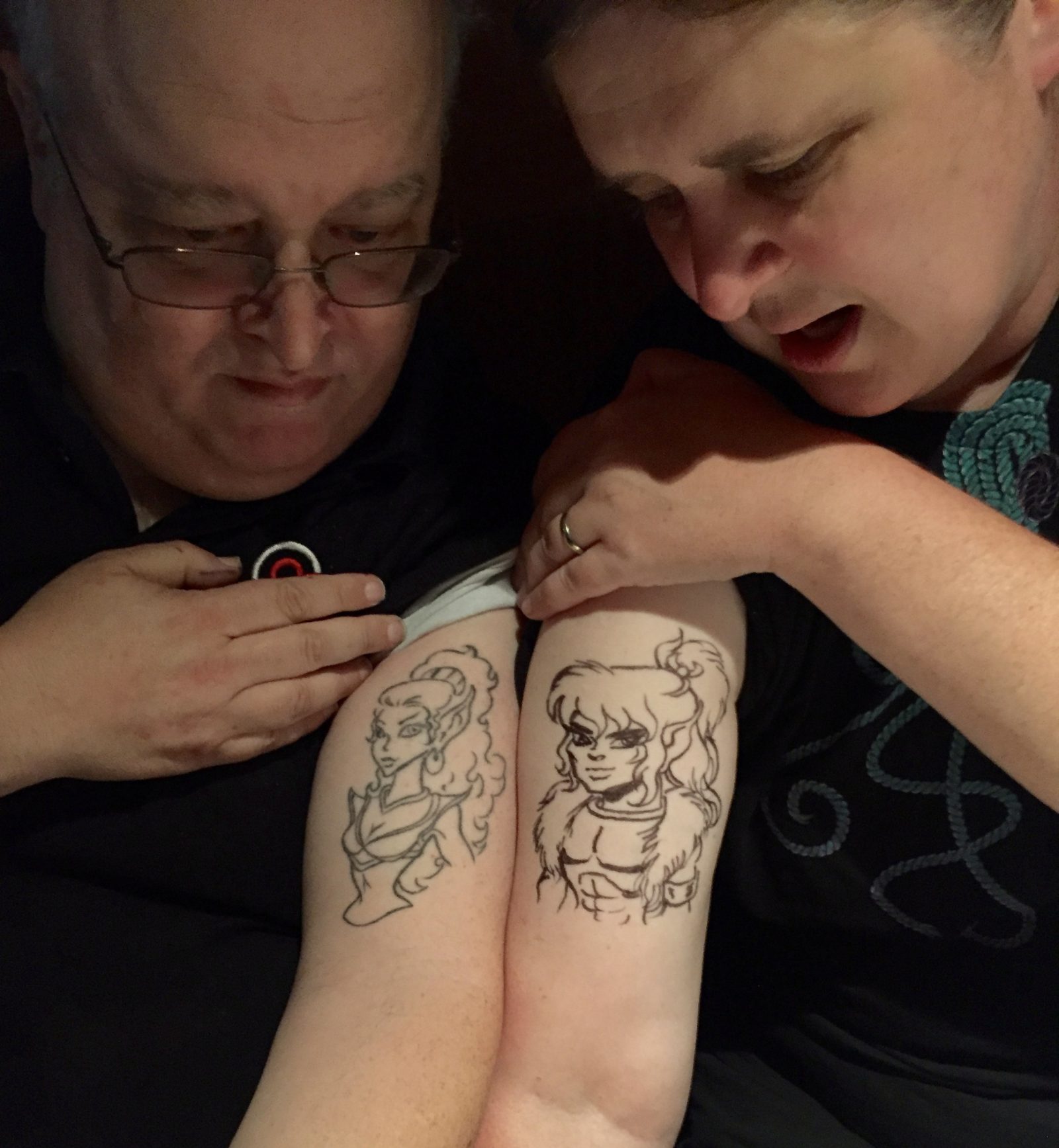 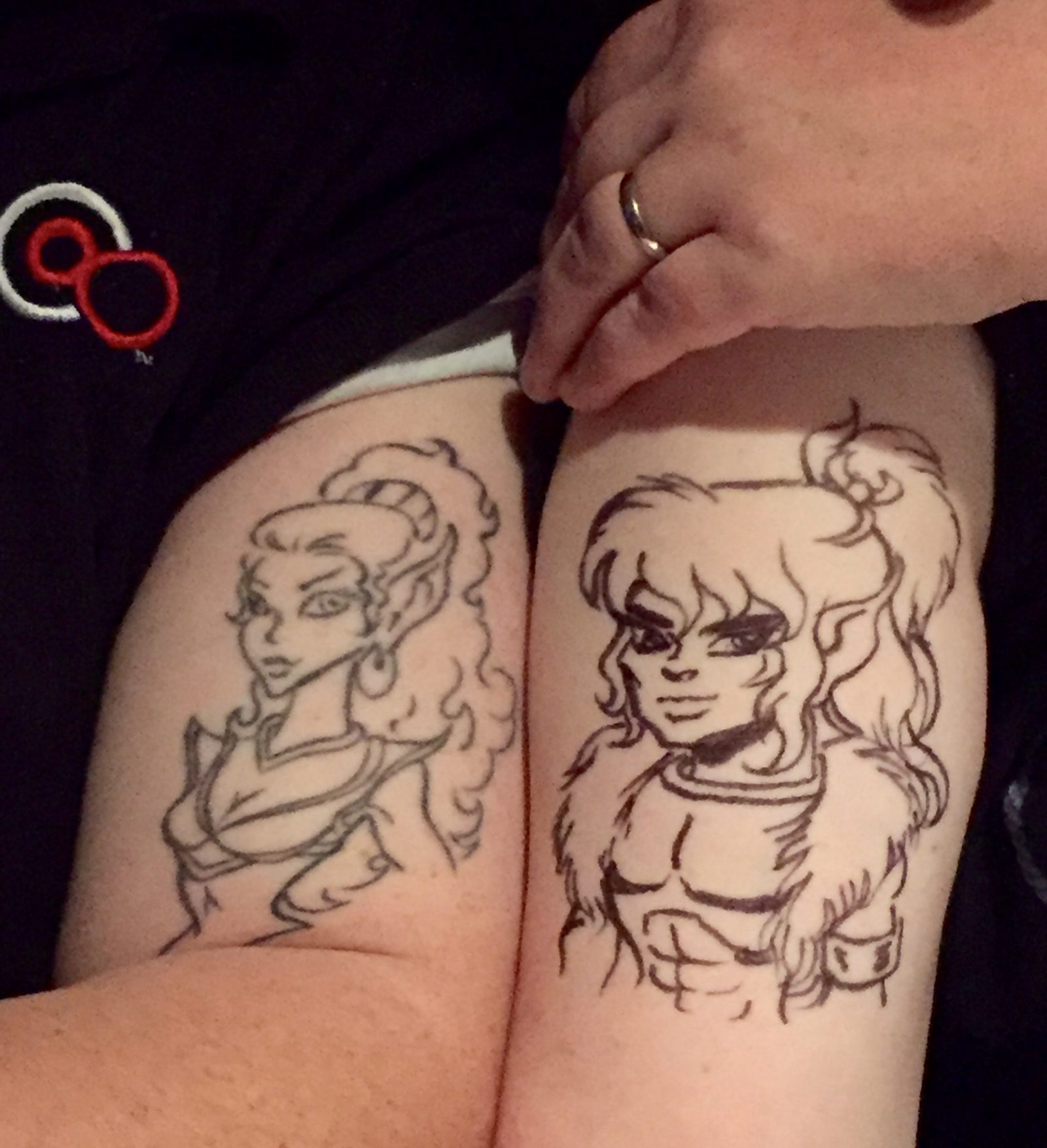 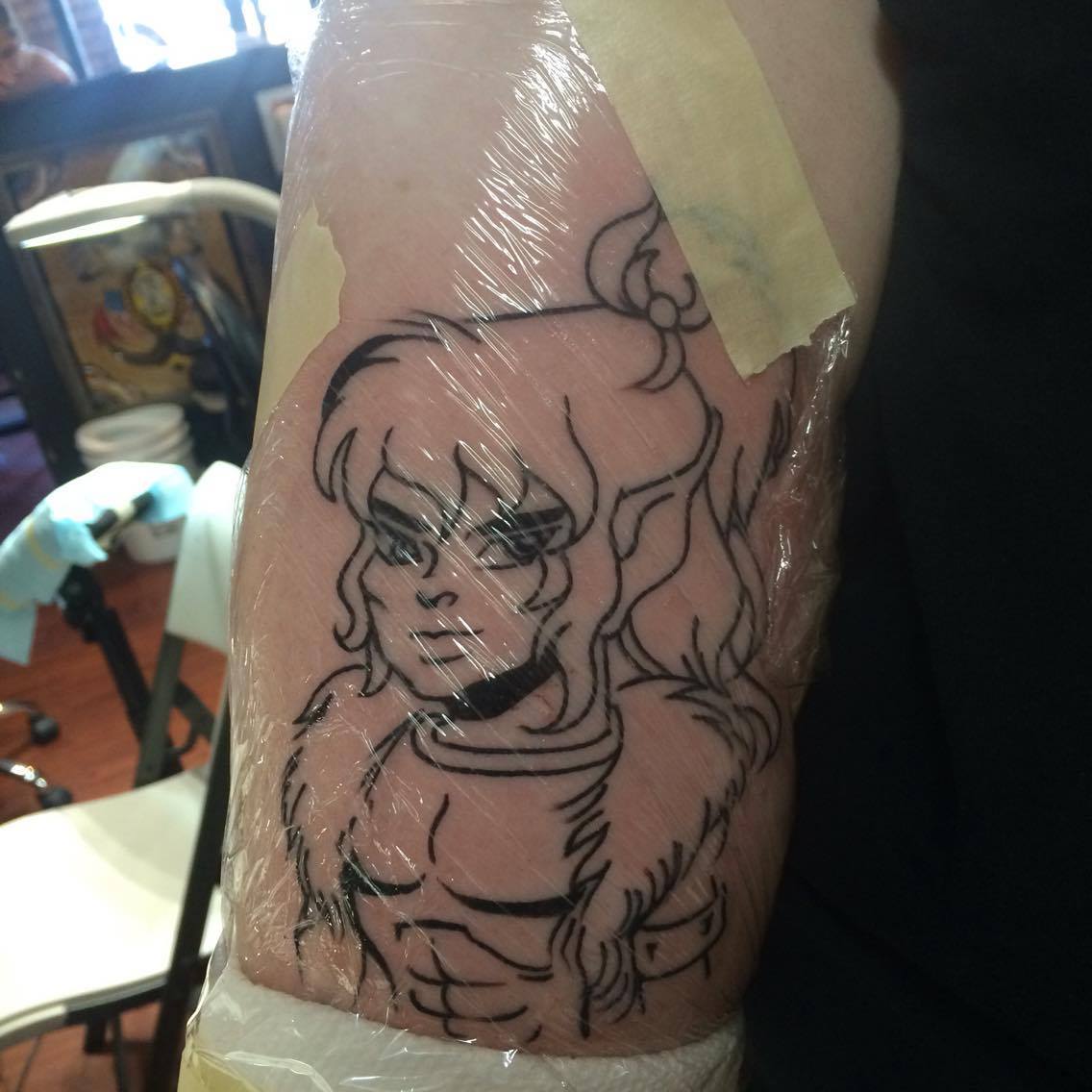 Cutter and Leetah, together forever, permanently inked into Kathleen and Peter’s respective arms.

Good times with good friends and lots of ElfQuest. It really was a fun way to end yet another wonderful (if loud and hectic) Comic-Con.