Joellyn Auklandus, writer on ElfQuest’s “Kahvi,” “Hidden Years” and “Wild Hunt” series and creator of characters such as Lehrigen and Teir, shares her heartfelt thoughts on the conclusion of the Final Quest.

SPOILERS below for issue 24 of the Final Quest. 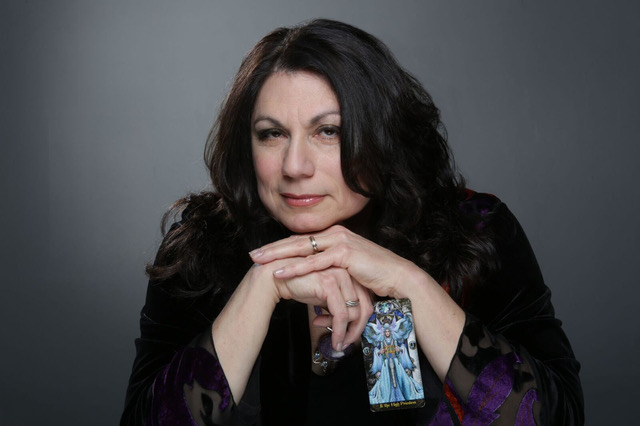 Perfect and beyond perfect. The spirit-maker spider was a gift from Abode, from the Universe, its version of telling Cutter “well done, good and faithful servant.” He served Life, he served The Way, he served as the Bridge Between the Worlds until it was completed. The moment he articulated “I’m one tired elf,” Abode acknowledged it with a gentle gift, the ultimate Final Kindness. 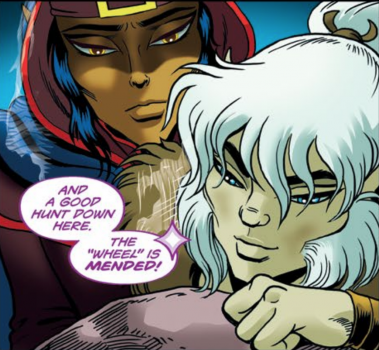 I loved the fact that there was no angst, no big final speech to any of the tribe. It was to Rayek that he said he last words, shared his last thoughts. Another completion, another bridge of destiny crossed, task completed.

All he needed to do for Leetah was give a last touch; thank you, Wendy, for making sure they had that.  Words and even sendings? Everything had been said, and all his future purpose still growing inside her.  A last seed planted.

Skywise, spirit-pale now, even when he hurtles to Abode in his old form, for the final parting from the mortal part of that which he loves. If he has figured out the one-and-the-same aspect of Cutter and Timmain, it isn’t enough to keep his grief at bay.

In a sense, Timmain and Cutter here illustrate how reincarnation and the “one life only” of Biblical literature can both exist. Our souls reincarnate time and again; our personalities get one chance and then dissolve. Timmain will go on, continue; Cutter’s story is told and finished; though his soul lives, the singular Wolfrider does not.

And the Father Tree reborn – the old, old saying that the spirits of the tribe rest in the branches. How incredibly true now, for the Wolfriders, that the greatest of all spirits is bone and blood, seed and sap, in the tree that shelters all of them.

I found not one discordant note, not one extraneous brushstroke, nothing. All perfect. 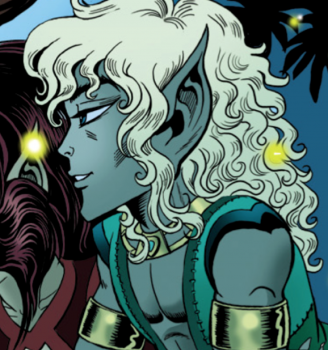 I was grateful to have my own chance to say farewell to a spirit that’s been with me for 35 years – chastening me when I got the story wrong, sometimes sitting with Mender in the branches of the trees by my apartment in Georgia, giving me ideas and truth about the stories I sought to weave. Be they my imagination or thought forms truly created, they companioned me throughout the 1990s as I wrote.  (And even though my stories were primarily about Kahvi and Ember, it was Mender who tended to intrude on my thoughts and question my story directions time and again.)

The Ones that sang to Wendy do occasionally let me hear whispered notes. Perhaps They will send me threads of song in the future. But I will miss his melody, even if the symphony is carried on by the rest.

The joy, the amazing privilege, of being trusted with the World of Two Moons over so many years is something I’ve never really articulated. Abode and Elfquest are such astonishing universes to play in – the rich tapestry of creatures, sentient beings, levels of magic, enlightenment and learning don’t often get woven so thickly (or so successfully) throughout a story arc. Though I’d never written for comics before, working for Elfquest on the admin and editorial staff for five years gave me a way of examining it that other writers might not have had. I was astounded when Wendy and Richard asked me first to edit, and then to tackle writing the Kahvi miniseries when the original writer could not complete it.

After that, it was Hidden Years and Wild Hunt, where I was permitted to truly dive deeply into the Wolfriders’ lives and tribes. Wendy and Richard trusted me to know what would “take” and what wouldn’t, what was correct and what belonged in someone else’s world. Mostly, I got it right. There were one or two clunkers. But over the years I got the rhythm and I got the characters – and they got me.

Lehrigen. Angrif Djun. Khorbasi. Daboi. Teir.  All of these came initially from my pen and ended up in the Final Quest, considered canon and fundamental to the storytelling. I am still amazed, humbled, honored. 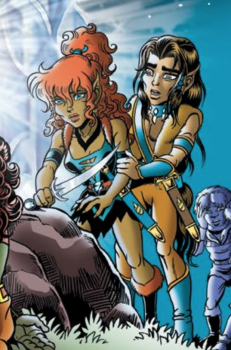 And Teir?  Well, every writer writes themselves into a character at some time in their career, and Teir is who I would have been, had Abode chosen me instead of this Earth and this Universe. His pain, his growth, his foibles and fierce protection of those he loved – he was the fire into which I threw much of what I wanted to change in myself. As he grew, so did I. As he became whole, so did I. So the fact that Teir remains vital in Elfquest, forever partnered with Ember, means he and I are both grateful.

Thank you to every Elfquest fan who embraced my storylines, my characters, and my “tilt” on Abode – for reading, for arguing, for parsing the lines. Fans are what keep my stories alive. And it means that for you, for Wendy and Richard’s lifework, and for the elves. . .  I made a difference. And, at core, that is what matters to this writer above all things.