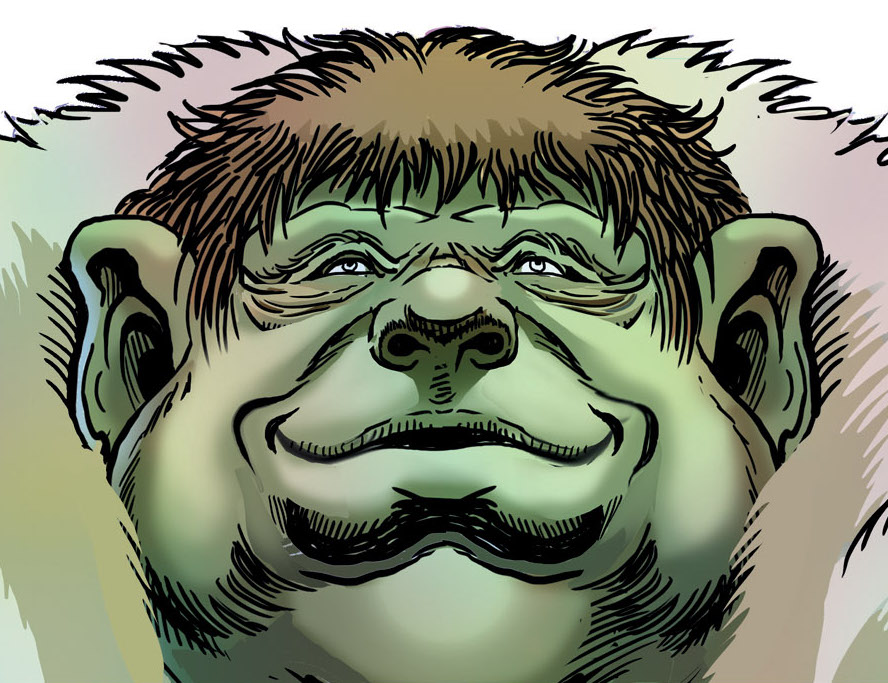 Ancestor of the trolls on the World of Two Moons

This ancient being is the last surviving troll who traveled with the High Ones on their interstellar journeys before coming to the World of Two Moons. Originally an ape-like burrowing creature born on their distant homeworld, he morphed into immortal troll form through the magical influence of the High Ones’ Palace-ship.

Like his fellow trolls in the Palace, the Firstcomer Troll worked to keep the space-faring vessel in good order but was dissatisfied with his life as a servant and harbored deep resentment towards the High Ones. He hatched the plan for a troll rebellion, which inadvertently caused the fateful accident that brought the Palace crashing into the wrong place and wrong time on the World of Two Moons, stranding all of its inhabitants on the dangerous new planet.

The trolls fled–from both their High One captors and the beast-like humans who brutally attacked the crash survivors–by heading to their safe place: underground. There they thrived, growing their numbers and building great kingdoms.

Free from servitude to elves, the Firstcomer Troll spent 20,000 years doing what he loves best: digging tunnels with his pick ax and unearthing pretty precious metals and gems. Over that immense passage of time, all of the other troll firstcomers fell victim to accident, illness or war, making him the sole living member of his species born before the crash on the World of Two Moons.

Eventually, the Frozen Mountain Trolls made him their king. Royalty is a mixed blessing for the Firstcomer Troll, who enjoys being surrounded by the most stunning of jewels and being waited on hand and foot by his people, but who also misses the simple satisfaction of a good day of digging and the joy of discovering new shiny wonders hidden within the rocks.