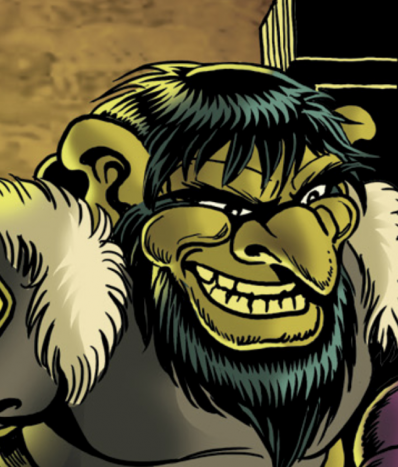 Descendent of Picknose and Oddbit;
Brother of Drub;
Buddy of Mender

Flam is a troll who wants nothing more than to make a name for himself – that, and a horde of gold, jewels and other lovelies. He joined Cutter and his band on the assault of Grohmul Djun’s Citadel, not because he particularly cared if the elves won back the shards of the Palace of High Ones from the warlord, but for the opportunity to rob the humans’ treasures.

In addition to being a strong warrior, Flam’s sensitive toes could seek out Two-Edge’s most devious pitfalls and he proved himself a valuable member of Cutter’s team. On the adventure, after an extremely rocky start, a most unusual friendship was born between Flam and the hot-headed elfin healer Mender.

After the Shards War, he followed his sister Drub as she set out to form her own queendom. Fancying himself a rival of Two-Edge, Flam tinkers and experiments to create tools, traps and devices to protect the Queen’s domain.