The Gliders were a small tribe of High-Ones’ firstborn. In an attempt to protect themselves from the vicious world outside, they sequestered themselves within the labyrinthine caverns of Blue Mountain. Over centuries, they recreated in exquisite detail their ancestral home, the Palace of the High Ones … but with their unending seclusion came stagnation.

Their nominal ruler, Lord Voll, exiled himself in a shroud of melancholic memories; his once-lovemate, the cruel and sinister Winnowill, effectively controlled all in his stead. When the web-spinning Preservers were reintroduced by the Wolfriders, the sight reignited Lord Voll’s dreams of returning to the true Palace, which mirrored Cutter’s own quest. Winnowill could not prevent the attempt, but after Voll’s violent death at the hands of the northern trolls, the Gliders abandoned the Wolfriders and retreated back to Blue Mountain.

Winnowill assumed total control of her people, using their powers to attempt to create a new palace in the form of a great stone egg. Her goal was to erase all past mistakes – especially the cross-breed, “impure” Wolfriders – so all pure elves could return to the stars. Her twisted dreams ended in the collapse of Blue Mountain, in which most of the Gliders died.

The known Gliders include:

Windkin was born to Wolfrider and Glider parents and Harotim is the son of a Sun Villager and Glider. 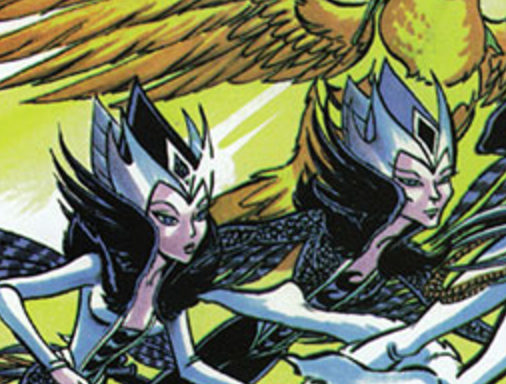