“Having A Good Day.”

Ambrose Bierce defined a cynic as “a blackguard whose faulty vision sees things as they are, and not what they ought to be.” I don’t know if it’s the natural consequence of an ingrained scientific bent, or the result of being placed on indefinite “hold” one too many times while trying to get through to customer service, but I do get cynical at times – or at least skeptical. Asked if the glass is half empty or half full, I’ll first want to know what’s in it.

Or, put another way, if in a given situation there are half a dozen pluses, but even as few as one or two minuses, I’ve been known to focus on the downsides (if there’s one tiny fragment of walnut shell in a plateful of brownies, you can bet I’ll be the one to find it) – even to the exclusion of the shiny bits. Tonight, as I was driving home from work by way of an errand or three, I found myself in what I recognized as an uncommonly bright mood, so I determined at that moment to record the things that had happened on this day that, as I look back, were good and pleasant and happy.

The morning started out with more or less the normal routine, which is to say, waking, showering, procuring coffee and bagel, and driving to work. I got in to the office about 8 am, which is my usual, but even though it’s neither the middle of the month nor the end, I decided that today I would pay bills. Cash flow had been down a bit at the end of last year, and I’d gone into the holidays feeling glum because there were still invoices left over from the previous payday. That’s not my style. Bills come in all the time, but on the 15th and the 30th, I like to sweep the ledger clean. As of the end of 2000, I hadn’t been able to do that.

But yesterday’s mail had brought some payments from the distributors who buy Elfquest books in bulk, and the online Wolfrider Shop had done healthy business during December, so suddenly instead of the company checkbook making sad, whimpering noises, it was telling me to go for it. Which I did. From the time I got into the office until about 11 am, I did nothing but process payments and crank out checks. Whatever tomorrow’s mail brings in, at this moment the Warp Graphics slate is clean. The feeling was very much like finally being able to shower off the coating of dirt and clippings after a full hot summer day’s worth of work on the lawn or in the garden.

Then the Fedex guy brought in a package that contained a CD of artwork that Wendy had worked feverishly on, so that I’d have it this morning, so that then I could work feverishly on my part of the project the images were destined for – the Elfquest action figures. These have been in development for some months now, and in the last week (or two at most), the pace has picked up from a saunter to a flat-out run. The paint schemes have finally all been approved, the molds and dies are being readied for production in Hong Kong… and the packaging turns out to be needed about three days ago. Wendy had already laid out and rendered the artwork that will be used as the front of the blister packs (with a goodly space in the middle for the actual figure to occupy), but the design of the back of the package hadn’t yet really been started.

Just a couple of days ago, in one cosmically densely jammed session lasting about six hours, Wendy, Jeff Ahlholm and Jason Palmer (from Living Toyz) and I (whose knowledge of Photoshop shortcuts made me a key player) roughed out the package-back template. Wendy still had work to do on the individual figures, so I took what pieces I had or could round up – text bits, logos, credits, measurements – and set up as much as possible pending the arrival of Wendy’s finished character art, which showed up right after I finished paying bills this morning.

From that moment on I saw nothing, heard nothing, did nothing that didn’t have to do with Photoshop. I love Photoshop; it’s a grand application, but even on a fast Mac it still takes time to do things to huge files. I was acutely aware of three facts all afternoon: One, that the work I was doing had to be back in California (where Living Toyz is) tomorrow morning; two, that the last pickup for Airborne (Warp’s overnight carrier of choice) was at a box downtown at 7 pm; and three, that the hours were flying by at an alarming rate. But by some means, I’m not sure how, I managed to finish and burn the CD containing the finished files, the printer behaved and yielded up the color roughs, and the airbill was ready to go, by 6:45. The traffic gods smiled on me, and I hit only a couple of red lights on my way to the pickup location; got there with actual minutes to spare! 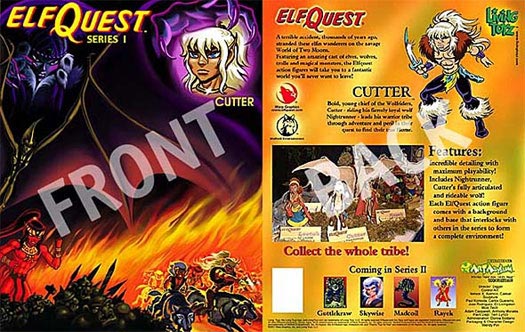 So with that particular pressure off my shoulders, I decided to go to a local mall that’s home to two places I’d been wanting to hit; an office supply store, and a Barnes & Noble bookstore. Found the various and sundry office stuff I’d been looking for (as well as a couple of items I hadn’t, but which leaped off the shelves at me in a fit of serendipity).

Big bookstores like Barnes & Noble and Borders are heavenly places for me. If I’m feeling tired or down, merely wandering the aisles, not paying attention to anything in particular, browsing what catches my eye can be quite a therapeutic session. Again, there were a couple of items I sought, which I found, and again, there were others I wasn’t looking for, which found me. My favorite was the newest edition (the 4th) of the American Heritage dictionary of the English language.

In case it’s not been obvious for the last umpty years, I love words and using the language, and I try to do it correctly and with affection. The dictionary I’ve chosen as my very own is the American Heritage (3rd edition). There are larger and more scholarly dictionaries, but the AH is an old favorite. I have to confess that one of the reasons I like it so much, in addition to its very readable presentation, is that it contains all the “good” words. I appreciate an editorial staff with the, ah, courage to include colloquial but vulgar words, in the face of what often seems like encroaching conservatism into books and the arts in general.

I’d heard, a few days ago, a review on National Public Radio (another favorite experience, this one of the listening variety) of the new American Heritage dictionary, and in some back cubbyhole of memory, I filed away the fact that it was now available. This evening it introduced itself to me, which made me very happy. Now, it was nearly a foregone conclusion that I would buy a copy, but before I did… I just had to look. Had the bluenoses gotten to my old friend? Was “political correctness” at work here?

Ahhhhhh… no. All was right with the world. All the good stuff was still intact, safe and sound – in fact there exists for one of the words (I can’t use it here but it’s toward the end of the “F” section) not only the definition but a wonderfully candid etymology of the word, from its first appearance in a poem in the 1500s! I chuckled secret little chuckles all the way through the checkout line and into the parking lot.

From the bookstore to home is only a few minutes’ drive, and as luck would have it, the local oldies station played a double shot of the Beatles that lasted from the moment I got into the van until the instant I pulled into the driveway. It’s good that it’s winter now and that the weather necessitates keeping the car windows closed, so that when I sing along in high spirit and full (though ragged) voice it doesn’t create an environmental hazard. At the time, though, I don’t think I cared; it just felt good to let loose, even if “When I’m Sixty-Four” and “She Loves You” may never recover.

That was today. I got in the front door, and sat down to write this. I’ve often felt there are plenty of days in life that pass by from dawn to dusk without much to recommend them. Experience says there are also some days that just plain suck the mop. But somewhere in that vast sea of dull days there are events and happenstances that sparkle out loud. If today has taught me anything it’s that I have the option either to see the glittering light but then let it sink below the gray horizon, or to fasten upon the brightness and forget the blah that’s all around it.

Today, at least, I know which choice I made, because today was a good day.