Some of you who have been with us for a long, long time may remember editorials or interviews in which Richard and I explained that I was born with congenital hip dysplasia and that we were going to be doing things to correct it, bit by bit, over time. My first surgery in 1984 was a big ‘un that interrupted the publication of EQ magazine for quite a few months while I recovered. Other surgeries followed, culminating in the replacement of my left hip in 1991. This past weekend my long and lesson-filled relationship with arthritis ended quite happily as I went fully “bionic.” After an extremely successful procedure – that took only an hour and a half! – I’m already home from the hospital and doing fine.

It’s only been three days, but I’m independently mobile, using only my cane to get about. I have the kind of surgeon who believes in pushing yourself, so no coddling for the next couple of weeks. Richard, who has been there for me every step of the way, and I will be taking lots of muscle-strengthening walks until the cane is a thing of the past. I may never jog a mile or jump rope or get into parachute diving, but there’s nothing wrong with gliding through life, is there? I know some very contented elves who do it all the time!

We read each and every one of your thoughtful get-well messages and appreciated them deeply. Some of you expressed sorrow that I had to go through pain but, honestly, don’t give it a thought. This is the easiest surgery that I’ve had. I truly believe that positive thoughts have power, and since this operation went so well, I’m thinking the love and light that you – as well as friends and family – sent has a lot to do with why I’m home so soon. So thank you very much indeed!

DC comics has been very cooperative in adjusting their publishing schedule around my recovery. Nevertheless, our editor extraordinaire Bob Greenberger is already noodging about deadlines. Today he called with well-wishes and to let us know that Grand Quest Volume Three is out and should be appearing in bookstores and comic shops any day. These volumes are selling very well which means somebody’s buying ’em – hopefully that next, new generation of readers we’ve been looking to pull in! But Richard and I have in no way forgotten you longtime EQ fans; we would love to hear what think about this new manga-style format. To us it’s a fresh look at the characters and story at a pace that enables us to focus on scenes that originally got a bit glossed over. I’m finishing up Grand Quest Volume Four, the most complicated manga-izing job yet, and am startled by how much more menacing Winnowill is when she gets more close-ups! 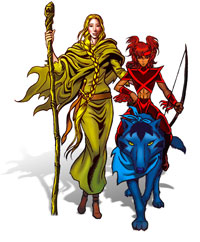 “Searcher and the Sword” will be out, of course, in time for this summer’s San Diego Comic-Con and we’re very eager to share this new Elfquest tale with you. Richard and I will be attending the con and signing as many copies of S&TS as you bring us. Look for us at the DC booth, just like last year. And maybe, at some point, a bunch of us can sneak upstairs to the food court for some EQ fun and chat. I’ve always wanted to do that, rather than set up a formal panel.

Well, my “sitting time’s” up – gotta get up and move around. Rejoice for me, kitlings. All’s well here and just getting better by the minute!