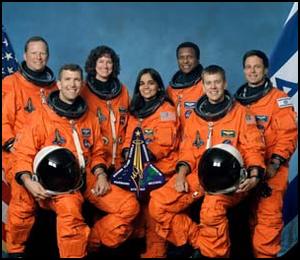 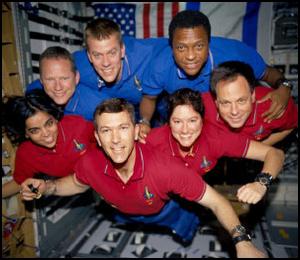 Later, there will be tears, and perhaps even an understanding of what happened and why. Now, there is only the dull numbness of shock.

The stars, and our dreams of reaching them, have always held – and hold yet – a deep and special place in our hearts. The way there is difficult, achingly so. Our searching spirits have soared in times past. Today we have taken a grievous wound to the soul of that quest. Pray fiercely that it is not a mortal injury, and take every opportunity to lift your eyes high and skyward.

Pray for and bless too, those seven explorers now lost to us. In many ways, there have been connections between us, Elfquest, and the American space program. In 1997, Elfquest was privileged to participate in a small but fulfilling way on the STS-87 mission. To us, today’s disaster is doubly tragic – for Kalpana Chawla, mission specialist aboard STS-107 served the same duty aboard that earlier flight, her first, which was also the Columbia. This mission was her second. Though we never met any of the crew of STS-87, still we felt as if we knew them and shared a kind of bond via Elfquest.

These are troublesome days for all the world, but never lose sight that every trial is also a message being given to us from somewhere. We only need listen deeply to find answers. And the stars continue to shine – and beckon.