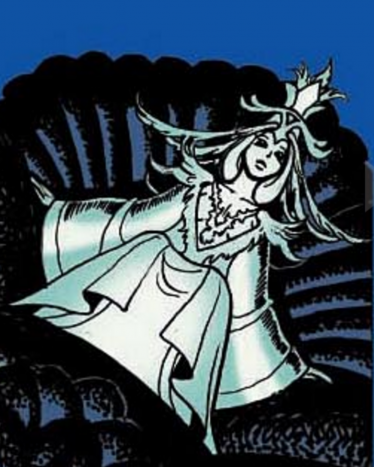 Innekah is powerful rock-shaper who lived in Blue Mountain. She served as the doorkeeper to the mountain, opening and closing the stone portal that led to the outside world. Like fellow rock-shapers Kaitek, Ekolin and Aurek, Innekah’s whole living existence was given over to her function, so much so that she became known simply as “Door.”

She responded only to Winnowill’s command when the human tribe the Hoan G’Tay Sho played their pipes to signal they were sending an offering to the mistress of Blue Mountain – although another powerful sender such as Strongbow could also force her to perform.

For millennia she sat on her perch, all but lifeless. When Blue Mountain fell she, along with most of the rest of the Gliders, died. Her spirit now resides in the Palace of the High Ones.