10/11. One month to the day. How strange. In New York they’re still cleaning up the rubble – and will be for some time. It could take up to a year. As many of you know, Richard and I were in the city last week (October 2) to videotape an edition of the “Speaking Freely” show for PBS, at the First Amendment Center uptown at Madison Avenue and 56th Street. Before the taping we felt compelled, as thousands of others have been moved, to visit the site of the disaster and… and what? See for ourselves? Pay our respects? Gawk, open-mouthed? All we can say is, nothing prepares you.

(Richard here: The dichotomy between uptown and downtown, between where life attempts to go on as it was, and where things will never again be as they were, is striking. Uptown, people walk and shop and traffic is about as snarled as ever. Downtown – well, people walk and shop but the air is much subdued and there is no traffic south of Canal Street. We walked, and noted the quiet storefronts and cafes, and were quiet ourselves. We had no specific goal, nothing we were trying to see or accomplish, other than to try to connect in some small real way with what this very particular place and all its souls had endured. We were walking west on Chambers Street and saw a knot of people at the next corner and went in that direction.)

At the intersection of Chambers and Greenwich, there was a police barricade. We looked to our left, and saw… 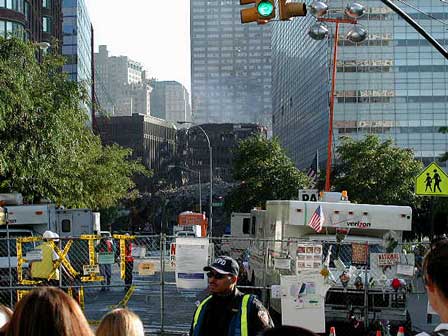 Suddenly, it hits you. It’s absolutely real… the dust, the street smells, the noise of cranes moving debris, the ghosts of two giant towers still there, but no longer there… the sadness, the overwhelming sense of loss. It was not a CGI movie. It really happened.

And as of Sunday, October 7, war is upon us. Yet life goes on.

You can imagine our mixed emotions as we arrived at the First Amendment Center, sometime later. The announcement of the Comics Code and Free Speech panel was evidently drawing a good-size audience for the taping.

We were greeted and led inside the beautiful, impressive building by staff and Elfquest fans alike. The mood was very upbeat, cheering us up considerably. In the hall leading to the Center’s TV studio, our friends from the New York City Comic Book Museum, sponsors of the panel, had their table.

The set was very colorful and close to the audience. Richard sat up front, taking the wonderful shots you’re viewing now. From what we could tell the event was standing room only, 80 to 100 people, many of them very lively and vocal Elfquest fans (thanks to all who showed up – you were a joy!). Before the actual taping David Gabriel, executive director of the Comic Book Museum, spoke a few informative words and helped warm the audience up (as if they needed it!). 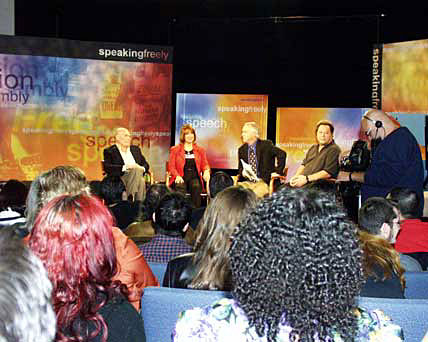 We’re not going to tell you much here about how the panel went because you’ll soon be able to see it for yourselves on PBS. The show is called “Speaking Freely” and we’re told our segment will air sometime in November. (And we’ll certainly announce to the Elfquest email newsletter the exact date and time as soon as we know it.) We will say the discussion moved along smartly and conversationally, punctuated by occasional hilarious moments and some true gems of wisdom from everyone – Carmine, Wendy, Ken, David and Joe. 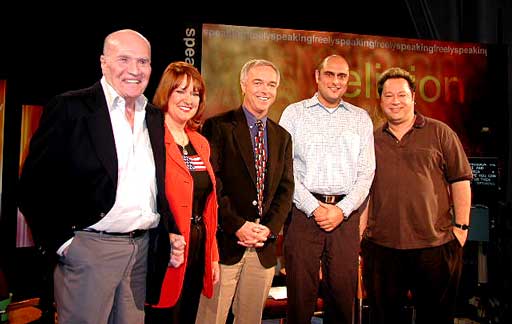 We don’t know if the question and answer period was also taped, but we hope so, for it was full of laughs and love expressed for the comics medium.

Back in the hallway, after the taping, we had the chance to get up close and personal with a bunch of exuberant fans – one of whom, a young animator, came all the way from Pennsylvania to be there. Many autographs were signed and we were blinded by flashbulbs 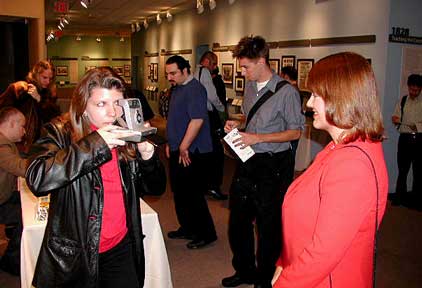 but we couldn’t have been more grateful. The giants from Marvel and DC were there but it was the elves who were getting the hugs and the gifts, including a gorgeous, handmade necklace 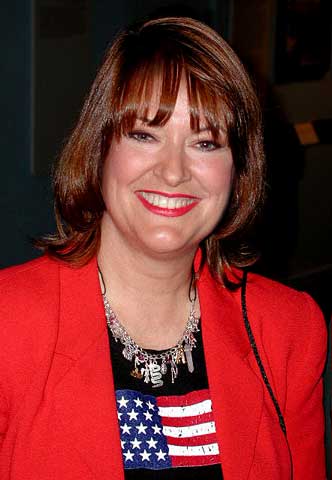 with charms representing many different elements of the Quest – there’s a snake representing Winnowill, and a tree, and a feather for the Gliders, and a handmade lodestone, and even a pair of tiny Scrolls of Colors!

Afterward, all the panelists and their guests were taken to a wonderful dinner where we all got to decompress from the events of the day and the evening. Conversation flowed and when it was all over we came away with a renewed sense of appropriateness: At a time when our country and way of life has suffered a blow meant to cow us into fearing for our lives and liberties, instead we continue to celebrate and practice those freedoms. The First Amendment lives, and nowhere more vibrantly than in comic books… most assuredly including Elfquest.

My Heartfelt Best to All,