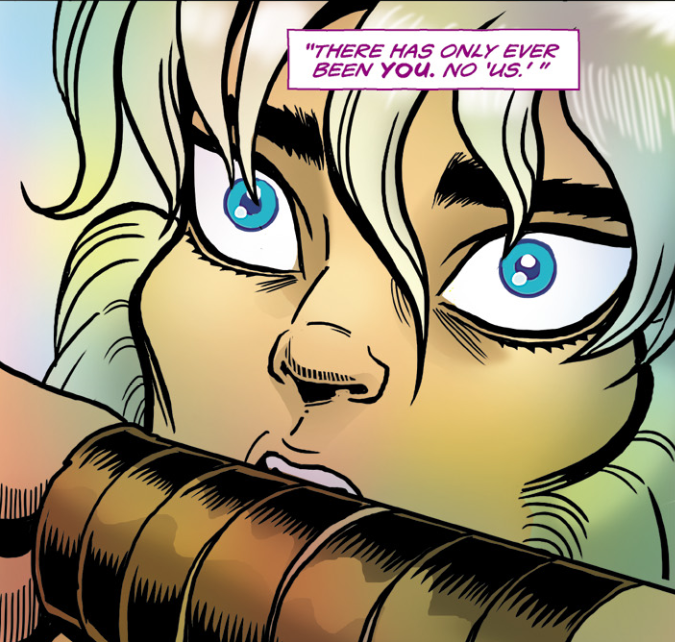 Longtime ElfQuest fan Angela Korra’ti recently caught up on the last several issues of Final Quest in one binge-read. She was having a little trouble really getting into Final Quest at the beginning, but after catching up she had a bit of a freak out about it–in the best way possible.

She wrote a great article summarizing her reaction. Here’s a blurb:

Because if you’ve been following this comic since its early days, you know how much Cutter’s gone through in all his long life. This is the chieftain whose vision led the Wolfriders to discover the other elf tribes in the world. He’s gone through half a millennium of separation from Leetah and Skywise in Kings of the Broken Wheel. He’s lost Holts and tribesmates to fire and humans and Madcoil and trolls and much, much more.

But he’s never been truly broken by any of it.

This, though? This broke him.

Wendy read Angela’s post and had this to say:

This is delightful! And I so completely understand the “where the hell is this going?” feelings that earlier issues of Final Quest have generated. To get to that moment where all the elements “light up,” as Angela says, took a lot of careful crafting. Richard and I have demanded a lot of you, our readers. We’re so gratified that you’ve stuck with it and now the rewards are coming hot and swift. We can’t wait for ish 14 to come out, either. It really is a doozy.

Final Quest issue #14 is out on March 23 and the Final Quest Volume Two graphic novel is available on April 27, both from Dark Horse Comics.