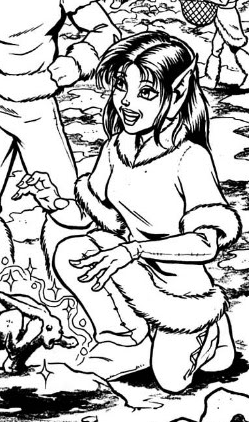 Mekda was of the first generations of elves born on the World of Two Moons after the crash of the Palace of the High Ones. She was born to those scattered Firstcomers and lived her early years close the site of the accident.

Like her age-mates and best friends Ekuar and Osek, Mekda was a rock-shaper. The bold trio made a devastating mistake when they went on a quest to rediscover the Palace. Though an ice age was setting in and the Palace was slowly being engulfed by a glacier, the young elves successfully located the ancient dwelling. They pooled their emerging rock-shaping powers, even though they were dampened by the very world on which they were exiled.

Bare moments after entering the home of their foreparents the young elves were set upon by trolls! These underground dwellers had rapidly evolved from the tiny creatures kept by the High Ones into hulking warriors who quickly enslaved Mekda and her compatriots.

She spent the majority of her long, long life as a slave of the trolls, tortured into submission by the most brutal means. Yet, still she resisted. Eventually, the trolls won out: all that was left of Mekda was a stump of torso and head. She had no arms, no legs…and no mind.  The trolls renamed her “Sack o’Bones” and used her as a slave to find hidden gems and metals within the rock – as well as for other, more nefarious purposes.

Mekda’s suffering was finally ended during the war with the trolls for the Palace. Her spirit is now free.