New ElfQuest Character Gets a Nickname

A new ElfQuest character was revealed on the last page of Elfquest – Final Quest #24 and ever since, fans have been going bonkers with theories about him. Reader Simone Farber jokingly dubbed the lad “Chad” because of his strawberry blonde hair, beach-body muscles and good looks–and the nickname stuck.

Entire threads in the ElfQuest Facebook Fan Group have been devoted to discussing “Chad” and fans are spinning myriad wild theories about what his actual name might be, which the Pinis have yet to reveal.

Richard Pini reads those threads, and, in true Richard fashion, came up with this in response:

Regarding the not-yet-naming of “Chad,” you all really should be careful about letting your inner desires and frustrations out all over the group like this where I can see it. Someone in a related thread suggested the name “Spider” because of this and that symbolism, and that immediately caused me to think of the old “Spider-Man” cartoon theme song. Which promptly got devilishly mutated. You know the melody; here are the new words: 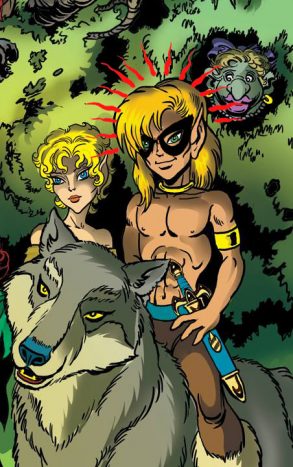 Chad the elf, Chad the elf,
Has no name he can call himself.
He is cute, he may rock –
Makes you think of a college jock.
Look out, here comes the cub called Chad.

Golden hair, pale skin,
All the girls love his impish grin.
For his name, they are stuck –
No sweet nothings, they’re out of luck.
That’s life, when you’re the cub dubbed Chad.

In the dark of night
Will his praises be sung?
In those breeches tight
Is this Chad really hung?

Chad the elf, Chad the elf,
Way too good to keep on the shelf.
Cutter’s kid, we’ve got schemes –
Will we share with you? In your dreams!
Muah-ha, keep spinning out your fancies –
We’ll keep alive this fan tease.
Here comes the cub called CHAD!