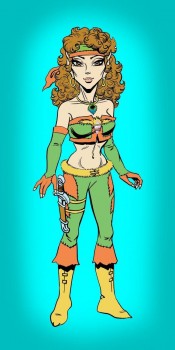 Daughter of Brownberry and Longbranch;
Lifemate of Redlance;
Mother of Tyleet;
Grandmother of Pool;
Close friend and longtime lovemate of Cutter

Trustworthy, brave and determined, Nightfall is defender of all she loves and believes in. She would have no fear of felling a longtooth with just a knife in her hand—but she would prefer to have her bow. A skilled huntress, she kills to provide and protect. While Nightfall embraces her rugged wolf-side, she is also an embodiment of feminine sensuality, and is fond of dancing naked in the moonlight with her friend, Leetah.

A striking counterpoint to her gentle lifemate, the tree-shaper Redlance, Nightfall refused to be parted from him in the Burning Waste, despite knowing it might mean her death as well as his. Like yin and yang, the two complement each other so well they shared their soul names.

Nightfall is Leetah’s staunch supporter and close friend. At least twice, Leetah has come to her aid: first in saving Redlance when all seemed lost, and again years later, in Nightfall’s personal quest to mother a child. By “forcing” Recognition between Nightfall and Redlance-using her healing powers aid in conception-Leetah was responsible for the birth of Tyleet.

Nightfall grew up with Cutter and the two were childhood playmates and adolescent lovemates. While Nightfall did not fully reciprocate Cutter’s feelings for her, instead developing a deep love for the tracker Redlance, she remained close with her “chief-friend” throughout his life. She and Redlance helped Cutter find a measure of peace when his brother-in-all-but-blood Skywise, his lifemate Leetah and children were kidnapped by Rayek. They became a second family to him, able to show Cutter that “life could be sweet within the waiting.”

Nightfall does not fear change and was comfortable with the advances her chief-friend brought to the Wolfriders. Yet she is the happiest living within the simple Way and is thriving in Father Tree Holt under Ember’s chieftainship.