Other characters of Elfquest

The Scattered Descendants of the High Ones

There are many elves scattered across the World of Two Moons that have not made it into the spotlight–yet.

Fire elves have learned to shape their living bodies into fire energy. They live at the base of volcanoes, thriving on the heat and feeding on the flames.

The Self-Shaped are elves that have taken human form to blend in with the native peoples of the World of Two Moons. They are counted as wise ones and wonder-makers, both feared and revered.

Palace Pilgrims are elves of unknown origins that have answered the final call of the Palace, returning to the ancient dwelling and learning the old powers in preparation for their journey to the Star Home.

Before Cutter’s time, the Wolfriders’ past is a murky and uncertain place. Trust the howlkeeper, but verify.

Valloa was a pure blooded elf in Timmorn’s time, who changed her name to Murrel after recognizing the half-wolf.

Zarhan Fastfire was most clever among the firstborn, the last known firestarter. He sired many children with Rahnee; their recognition awoke her elfin awareness and brought balance to the early Wolfriders.

Threetoe led The Hunt, those among Timmorn’s offpsring who were more wolf than elf. He challenged Rahnee and lost, striking out alone with his lupine followers.

Wreath and Softfoot lived in the earliest days of the Wolfrider tribe. The former cold and beautiful, the latter warm and crippled, both bore Prey-Pacer children.

Rellah was a manupulative pure-blooded elf who survived to Skyfire’s time, often voicing contempt for the more lupine wolfriders and denying the tribe her considerable healing powers.

Starflower was Freefoot’s lifemate and the mother of Oakroot. She and a young maiden, Dewberry, were almost killed by snakes.

Talon was a brave elf in Freefoot’s time, whose sendings mollified a group of dangerous reptiles.

Eldolil was the last pure-blooded elf to live among the Wolfriders. A young Oakroot sought him out at the place he had gone to die, and the elder shared with him a vision of what elves should be.

Lionleaper and Acorn were lovemates of Goodtree. Though Lionleaper was jealous of Acorn’s songshaping powers and the connection it gave him to their chieftess, it was he who ultimately recognized her and became her lifemate.

Thornflower was an argumentative and disobedient huntress, doomed to recognize the very object of her frustration, Mantricker. 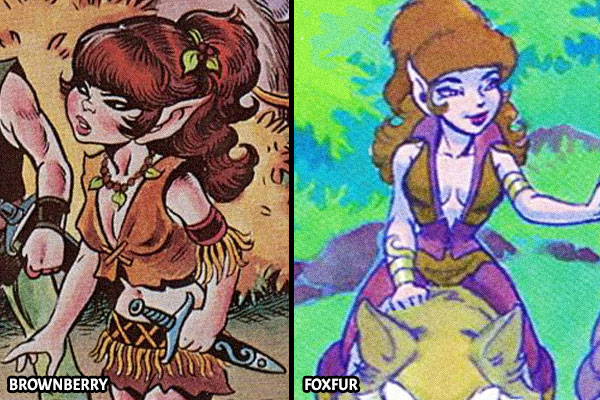 Brownberry was among those killed by Madcoil. Longbranch’s lifemate, her life was cut short just as she was learning to work clay.

Foxfur was Skywise’s longtime lovemate, matching his love of life’s playful side. The two were often to be found together in the last days of Bearclaw’s chieftainship. Like her chief, she was killed in Madcoil’s attack.

Serrin recognized Dart as he slept in wrapstuff, and cut him from the cocoon to conceive a child. With her existing lifemate, Talmah, they raised their son, Bowki. When the boy approached adulthood, Dart returned to his long wait for the Palace of the High Ones, knowing that his new family would age and die while he slept.

Soft-spoken Dodia was a member of the Jackwolfriders who apologized to Skywise after her bond-beast killed Starjumper, his wolf. She recognized Door and bore a child, but bashed the mad Glider on the head when he threatened the elves in the Forevergreen.

Shushen was the lifemate of Dart. He was killed in the Go-Back attack on Sorrow’s End.

Behtia was Wing’s Recognized lifemate and Serrin’s mother. She offered libations to Picknose and his family during their visit to the Sun Village.

Alekah, a rockshaper, was Savah’s granddaughter and creator of the Sun Symbol on the Bridge of Destiny. She died of a fever. Her grandon, Tekshu, was also a rockshaper, killed by a rattlesnake. Halek was taught by Dart to use an arrow-whip. Minyah, the gardener, was first to observe the flowing of Redlance’s plantshaping talent.

Brace, like the Doors and Egg, dedicated himself so entirely to a single task that he became all but a statue. His was to endlessly maintain a particular archway, subject to a geological fault, within Blue Mountain.

Mardu, Kahvi’s second-in-command, tried to convince her leader to remain with the Go-Backs, but served ably in her stead.

Urda was Kahvi’s trusted friend, watcher of the children, and lieutenant. Left in charge by Kahvi when she embarked upon her hunt for Rayek, Urda was reportedly ambushed by trolls and presumed dead.

Vaya was captured in an opening skirmish in the war for the Palace, holding off the mountain trolls so the others could escape. Briefly enamored of Pike, she refused to answer his desperate sendings, knowing her fate. She managed to injure Guttlekraw before being cut down. Two-Edge posed her corpse in armor; her mother, Kahvi, grieved only after the war was over.

Zey became chief of the Go-Backs after Urda’s disappearance. An opportunist, he allowed the tribe’s standards to degenerate. When Kahvi returned from the Wolfriders, he realized that his position was insecure. Encouraging her to try and steal the Little Palace from the Sun Village, he hatched a plot to ensure she would not return. Taken captive by the Sun Folk, Kahvi killed him herself when he led his own raiding party in search of the relic.

Vok was one of Kahvi’s favorite lovers and a flute-player. Roff was a cheerful, gluttonous Go-Back. Yif was killed in the Elf-Troll War; Kiv survived. Jirda was a toddler when Kahvi first left the Go-Backs, and barely remembered her upon her return. Mirff was one of Chieftess Venka’s warriors, as were Pyutt and Gahv, who were wounded in battle against the misfit trolls.

Mekda and Osek were members of a group of elves living near the Frozen Mountains—perhaps firstborn, or perhaps a generation or two later. Along with Ekuar, they set out to find the Palace of the High Ones and succeeded, only to be captured by trolls and enslaved. Their rock-shaping skills were put to endless use in forming King Guttlekraw’s kingdom. All suffered dismemberment as punishment for disobedience.

Osek escaped during Greymung’s rebellion, but was soon lost in the burning waste. His last act was to create a small cave, where his remains were eventually found and mistaken for those of the then-missing Rayek.

Mekda was tortured to madness, losing all but one limb and gaining the name “Sack-O’-Bones” from Guttlekraw’s trolls. After using her to create a tunnel into the Go-Backs’ lodge, a raiding party left her to die of exposure in the snow. Her frozen remains were found by Pike, who lamented, “They’re careless with their tools, these trolls.”