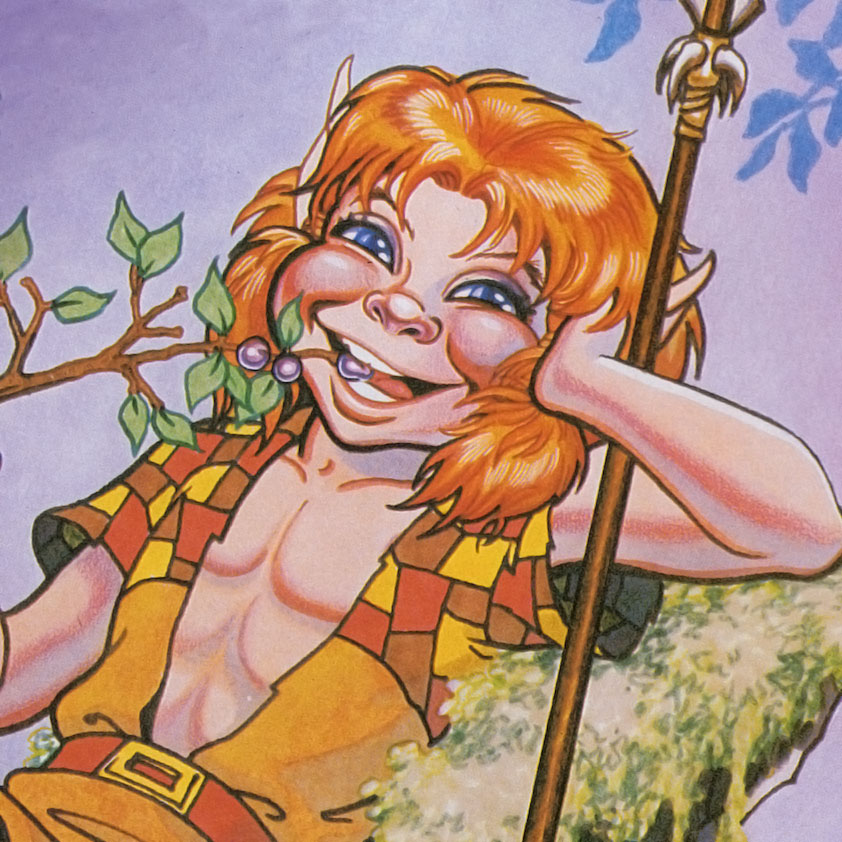 Son of Rain;
Brother of Rainsong;
Lifemate of Krim and Skot;
Father of Sust and Chiepar;
Protégé of Longbranch

Pike is the Wolfriders‘ happy-go-lucky storyteller, a fun-seeking and mischievous “keeper of the dreamberries,” always content with a roll in the furs and a sack of wine. Ready with a certain sarcastic insight that even a Go-Back would not mistake for intellect, Pike’s storytelling gifts nonetheless represent the memory of a tribe given to forgetting. His love of the easy path–and for the intoxicating berries–remains unchallenged by the heartbreak that befalls him more than once. If a more thoughtful side to Pike’s character eventually emerges, its manifestations are yet uncommon; he has no grand ideals or desire for quests, and constantly needs to be told what to do. His initiative is generally limited to matters of sex, low humor, partying, fighting, larceny, and sex.

The son of Rain the Healer, who tried to force recognition by magical means, Pike himself joked that the experiment went awry. Of his mother, nothing is known.

While named for his choice in arms, Pike’s greatest fondness is for the vision-inducing fruits that grew around the holt. An aficionado of Old Maggoty’s finest Dreamberry wine, Pike’s tolerance for less savory brews extends further even than Bearclaw’s; as a result, he is quite capable of causing and getting into trouble.

The storyteller Longbranch saw the boy’s interest in the howl and designated him as his successor. When the Wolfriders were burned from the Holt, Pike ensured the berries’ survival and was first to benefit from Redlance’s nascent plant-shaping power. In the Sun Village, he spent much time with Shenshen, consoling her upon his departure.

When the Go-Backs Krim and Skot joined the Wolfriders, Pike was drawn to their rough and ready cheer and the three became lifemates. Pike treasured his new family, often seen fooling around and scrapping with one another.

Pike is usually cheerful, but death has dealt him heartache. Pike shared a dance with the Go-Back warrior Vaya only to have her torn from his arms in battle. He discovered the frozen remains of the tortured rockshaper, Mekda. He watched his family’s first child, Chiepar, die in infancy.

If seemingly unencumbered by the fact, Pike is certainly aware his parents were unrecognized, and in the self-deprecation and fooling around may be found a measure of insecurity; despite Longbranch’s tutelage, it is not for years after his mentor’s death that Pike is seen to fully adopt the mantle of storyteller. When the Wolfriders slept millenia to await the Palace’s reappearance, Pike teased out his tribesmates’s dreams and unraveled their meaning.

Nowhere have we seen Pike’s heart more wounded than when his lifemates joined the attack on Citadel Mound. Though far away, he knew of Skot’s death at once, and saw his shadow in the fire—a mystery that hints at the strange power of the elves’ psychic bonds. Reunited with Krim after the palace was restored, the two grieved for their departed third—and she told him that she was pregnant.

Krim and Pike subsequently joined Ember’s wild hunt, where they raised their son, Sust, to rambunctious adulthood. Pike often finds himself restraining his bluntly expressive lifemate, not least during the Wolfriders’ latest battle with the tyrant Angrif Djun.

After Krim’s death, Pike returned to Cutter’s tribe and currently resides in the Original Holt.