Protector of the Sun Village, Master of the Palace, Winnowill’s Jailor 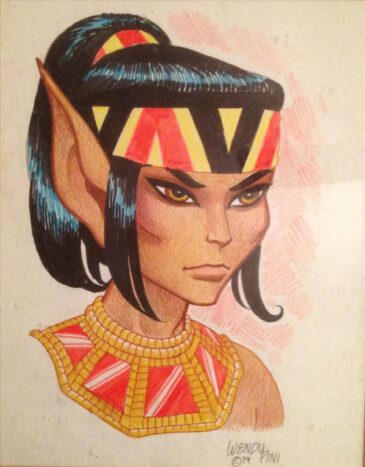 Restless and brooding as a youth, Rayek preferred the solitude of the rocky desert mountains to the company of his affable tribemates in the Sun Village. Fittingly, his name means “child of the rocks.” He burned to be first in all things and had the drive to achieve that goal. He often looked down on the contented Sun Folk as underachievers lacking the will to become something greater.

The development of his magical abilities early in life fueled that drive, especially after an attack by a pack of jackals left his right arm debilitated. His telekinetic power made up for the loss of the use of his arm and at the same time, this unique ability set him apart from everyone else. Rayek’s powers brought him the admiration of his tribe and the attention of the venerable Savah, under whose tutelage he honed those powers. He became the Sun Folk’s chief hunter and protector–and both his magic and his tribal position further fed his pride.

A lifelong friend and lovemate of the Leetah, who restored the use of his damaged arm with her healing magic, the two spent hundreds of years together before the Wolfriders’ arrival changed their world. His primacy challenged after Recognition struck Leetah and Wolfrider chief Cutter, Rayek invoked the village’s Trial of Head, Hand, and Heart, a traditional courtship ritual alien to the ragged newcomers. Thinking he had bested Cutter, Rayek’s arrogance led him to the ultimate humiliation, when his rival saved his life. Losing his place and sense of purpose, Rayek left the Sun Village and found his way across the burning waste to the troll caverns. There he found the captive rock-shaper Ekuar, whose mentoring led to significant growth in Rayek’s powers. When Greymung and Guttlegraw’s trolls clashed, Rayek and Ekuar escaped to the Frozen Mountains, where they fell in with the Go-Backs in their fight to recover the Palace of the High Ones.

Rayek helped rescue the Wolfriders from a troll ambush when they arrived in the Frozen Mountains on their own quest for the Palace, hauling Cutter from battle and helping Leetah heal his mortal wounds. Repaying the debt to Cutter for saving his life during the trial years earlier only to find his insecurities and jealousy reawakened, Rayek fought alongside the Wolfriders and the Go-Backs to reclaim the Palace. After their victory, Rayek turned the Scroll of Colors, helping the elves and trolls learn of their shared origins. He remained there, appointing himself Master of the Palace and dedicating himself to learning all of its magical secrets, determined to restore it.

He eventually left the Frozen Mountains on a quest to Blue Mountain to learn more about the Gliders and entreat them to join his cause to restore the Palace. He parted bitterly with Go-Back chief and once-lovemate Kahvi, who coldly lied to him that their child together had died at birth, though in truth the newborn lived, hidden away from him. In his anger at Kahvi and grief over his belief that his child had died, Rayek warned the Go-Backs that he would destroy them if they allowed harm to befall Ekuar while he was on his quest to meet the Gliders. 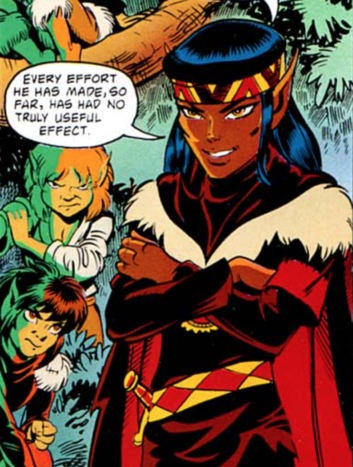 During that adventure, after manipulating both Two-Edge and Aroree into aiding him, Rayek banded up with Leetah and the Wolfriders to help rescue the stolen cub Windkin from Blue Mountain. When he finally arrived at the Gliders’ stronghold, his overweening ego made him an easy target for seduction by Winnowill, whose quest for elfin purity reflected his own blindness to others’ needs. In the end, though he recognized a kindred spirit in Winnowill and became deeply enamored with her drive and power, Rayek helped subdue her, causing the collapse of Blue Mountain and the death of most of the Gliders after their millennia-long servitude to Winnowill. Holding the spirits of the now-freed Gliders within himself (and borrowing their significant magical powers in the process) Rayek led them back to the Palace.

Learning that the Go-Backs had failed to protect Ekuar from kidnapping at the hands of the trolls while he was away, Rayek used the Gliders’ power to destroy the snow elves’ lodge, almost killing Kahvi along with his infant daughter Venka, who was indeed very much alive despite Kahvi’s lie. With the Palace’s ability to fly restored by the Gliders’ inestimable power, Rayek rescued Ekuar and took the vessel, leaving the Go-Backs in exile. He then flew the Palace to reunite the Wolfriders and Sun Folk at Sorrow’s End—albeit under Cutter’s nominal command. 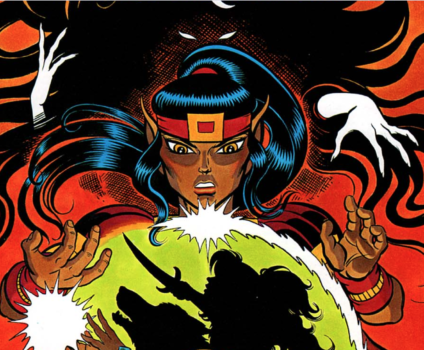 After guiding the Palace to the source of a psychic cry that manifested when the magical structure was restored by the Gliders’ magic, Rayek learned that it was the voice of their own starfaring ancestors the High Ones, who once used the Palace as a space and time-traveling craft. Having first arrived at the World of Two Moons in the distant future, an accident aboard the High Ones’ craft had sent it crashing far into the world’s past, stranding the delicate magical beings in that dangerous, primitive time. Concluding that he could return the Palace to the future and prevent the accident from occurring in the first place, egged on by Winnowill, Rayek stole the Palace through time with Cutter’s family aboard, leaving the mortal Wolfriders stranded.

Upon arriving thousands of years into the future of the World of Two Moons, thinking the Wolfriders long dead, Rayek set out to gather the remaining elves, believing they could survive the time paradox he planned to create if they were within the Palace. Finding the Wolfriders still alive and understandably uncooperative and pressured by Ekuar and his newly discovered now-adult daughter Venka, Rayek ultimately abandoned his plans. 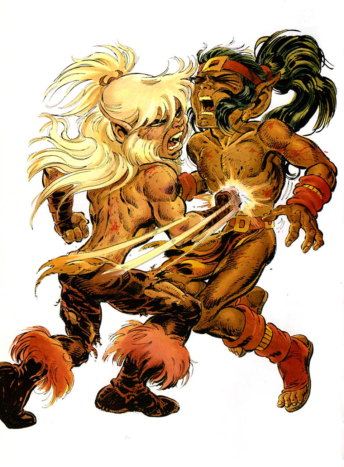 Though the crush of that failure left him magically impotent, Rayek was comforted by Venka and eventually regained his powers. As Cutter and Rayek resolved their differences and found a measure of healing in a brutal fist fight, Winnowill attempted to wrest control of the Palace, resulting in it shattering into millions of crystal shards which then fell into the hands of the human warlord Grohmul Djun.

At the culmination of a sharp struggle to recover the Palace shards, Winnowill was decapitated by the Djun. With her disembodied spirit threatening to poison the Palace itself, Rayek, still loving her (and, perhaps equally, her power) drew her wicked spirit into himself as he once did with the rest of the Gliders. In trapping Winnowill’s spirit to save the rest of the elves from her ghostly menace, he cursed himself to an eternal psychic struggle with her.

Rayek went into self-imposed exile, the faithful Ekuar ever at his side, to 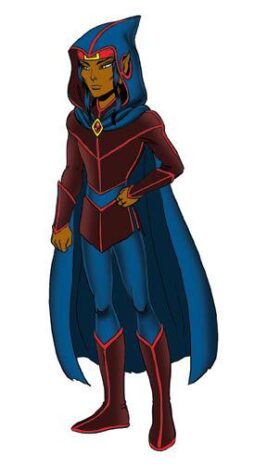 focus all his energies on keeping Winnowill’s spirit contained and safely asleep where it could do no harm. When Sunstream sent forth the call to all elves on the World of Two Moons to return to the Palace, Winnowill’s spirit awoke and again threatened to poison the Palace in her malice and vicious rejection of the efforts of Timmain and Sun Folk to heal her. In his blind love for her–coupled with misguided possessiveness–Rayek refused to unburden himself and release her spirit over to the Palace elves for safe-keeping. Again he was forced to leave the Palace for everyone’s safety.

He served as scout and assassin with Windkin as invading humans sought to destroy the Wolfrider’s holt. Winnowill later manipulated him into open battle with humans and Rayek was mortally wounded. As the WaveDancers desperately tried to heal him, both Winnowill’s and Rayek’s souls were stripped bare and the one-time Lord of the Gliders finally understood that Rayek’s love for her pure and innocent soul, which still existed though buried under layers of stagnation, mental illness and self-chosen rejection of love, was actually genuine.

While for Rayek the experience was a 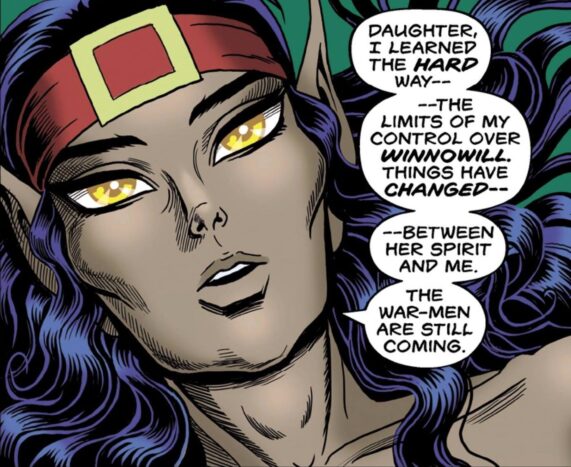 breakthrough, allowing him to finally let go of much of his arrogance and possessiveness, that revelation of genuine love was unfathomable and unacceptable to the wicked demoness. It forever changed the dynamic between Rayek and Winnowill. No longer trying to directly gain her freedom, Winnowill chose to willingly remain Rayek’s prisoner to prove that his love is just weakness doomed to fail, thus torturing him and inflicting the maximum damage in her quest to utterly annihilate his spirit.

Resolved to withstand this onslaught in his new sense of service and humility, Rayek now wanders the world subjecting himself to Winnowill’s tortures for the protection of all elves–and indeed all living things–on the World of Two Moons. 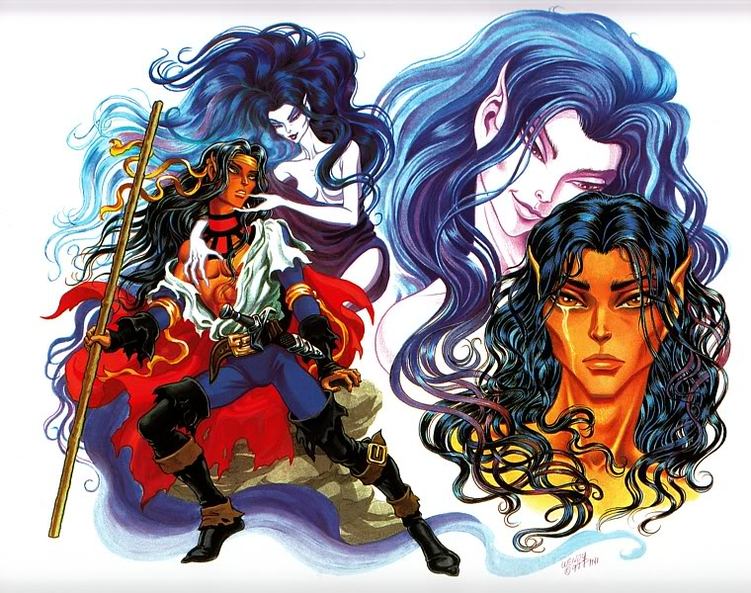