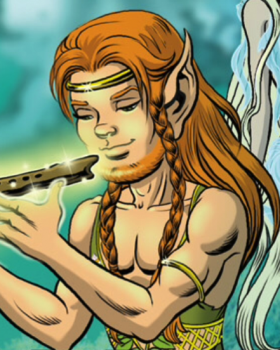 Lifemate of Nightfall;
Father of Tyleet;
Grandfather of Pool

Named Redmark in his youth after both his crimson-red hair and his unmatched ability to track the blood trail of wounded prey through the dark forest, Redlance earned his current tribe name after an extreme act of bravery: he faced off against a huge longtooth cat and saved Chief Bearclaw from the beast by bracing his spear against a rock and impaling it as it leapt to the attack.

Despite his aggressive-sounding name, Redlance is actually a mild-natured Wolfrider. He gets fulfillment from simply being useful to his tribe, his wolf friend, and from communion with the living flora of the Wolfrider’s Holt. Though he can certainly hold his own when cornered, he is too much of a nurturer at heart to do willful harm unless it’s a matter of life or death to those he loves. This gentleness makes him a natural at watching over, nurturing and protecting the cubs of the tribe.

Redlance is a master of the soft counsel, gently reminding tribemates like Woodlock and Ember to consider the consequences of violence and hatred. He helps his people remember that while they might be hunters, they are not murderers. Redlance believes in forgiveness and fairness and is ever hopeful that the way of peace will prevail. That he can have such an outlook on life, even after being tortured to near-death by superstitious humans and brutalized by vicious trolls, is a testament to his peaceful nature.

Redlance is a plant-shaper, and although this magic power was passed down from his ancestors, his ability didn’t manifest itself until well into adulthood. Even so, he has always been attuned to the lifeforce within all green, growing things and can, in his own way, read the subtle language of the forest. Before his powers blossomed he often felt (unnecessarily) insecure about his contribution to his tribe. When they finally did emerge, he gained a new sense of confidence and pride. He always uses his powers in service to his people, whether it be making weapons, creating defensive thorn walls, protecting the cubs, teaching woodslore, or even shaping the very Father Tree that the Wolfriders call home (…and sometimes simply helping the dreamberry bushes along, much to Pike’s delight).

Redlance and his lifemate Nightfall have been together for many years and are a perfect compliment to each other. In their relationship, Nightfall is “the sword, the spear, the arrow” and Redlance “the flower, the tree, the vine.”  Though they have not actually Recognized, they voluntarily exchanged soul names in their deep love for each other. With the help of Leetah, they conceived a child in the Palace of the High Ones and gave birth to their daughter, Tyleet.