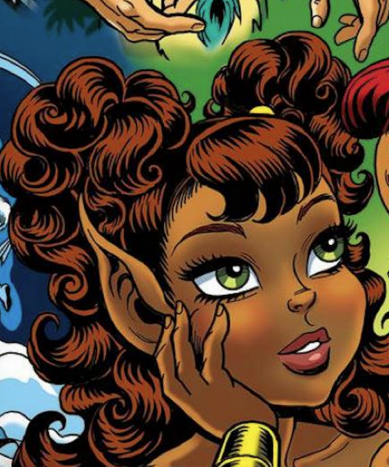 Daughter of Toorah and Sun-Toucher;
Sister of Leetah;
Aunt of Ember and Sunstream;
Lovemate of many, including Zhantee, Pike, Skot, and Krim;
Student of Old Maggoty

Listen to the ElfQuest Show podcast all about Shenshen.

Shenshen is the bubbly and vivacious younger sibling of powerful healer Leetah. A flirt and a gossip, she nursed a rivalry with her sister and worked hard to establish her own talents, primary of which are her midwifery skills. Ember, Sunstream, Mender and Tyleet are a few of the elves she helped bring into the world.

Her soft upbringing was in stark contrast to the Wolfrider life she eventually embraced when Rayek stole the Palace of the High Ones away to the far future, leaving Shenshen trapped in the forests of Djunsland with Cutter and his tribe.

Over the following centuries, Shenshen studied herbs and medicine under the tutelage of the troll Old Maggoty and grew into a tougher and more self-sufficient creature. Though no longer a sheltered Sun Villager, she remains a flirtatious and frisky elf, always happiest when the world conforms to her views.

Shenshen isn’t one to turn down some good fun and has had numerous lovemates, with Zhantee and Pike among her dearest playmates. In the Sun Village she enjoyed all sorts of lovematings (often multiples) and in Thorny Mountain Holt she treed with Pike, Krim and Skot for many years and comforted them after the death of their newborn cub, Cheipar.

As she and the Wolfriders dreamed in suspended animation of Preserver cocoons awaiting the reappearance of the Palace of the High Ones, Shenshen wrestled with her jealous feelings and learned that she needed to “shine where you love.” Upon Leetah’s return, Shenshen found herself about two hundred years older than her once-elder sister and quite a bit more mature than when her “older” sister was kidnapped.

Shenshen can always be expected to speak before she thinks, but that doesn’t mean she doesn’t care about others. She proved herself a loving and responsible aunt, watching over her nephew Sunstream during his trek to the Forevergreen. 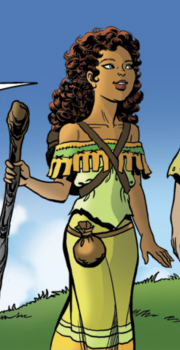 When the shattered Palace was restored after the Shards War, Shenshen settled in the original Father Tree Holt with the Wolfriders, where she delivered Strongbow and Moonshade’s third child, Freetouch, as well as Cutter’s first grandchild, Shukopek, son of his adopted human daughter Shuna.

Yet with births few and far between among the elves, as time passed, Shenshen began to feel increasingly unfulfilled. So she made the shocking decision, with the help of Leetah’s Palace-enhanced powers, to change her shape into that of a human. In that form she may better walk among the fast-breeding humans alongside Shuna and shine where she loves by using her midwifery skills to bring new life into the world.