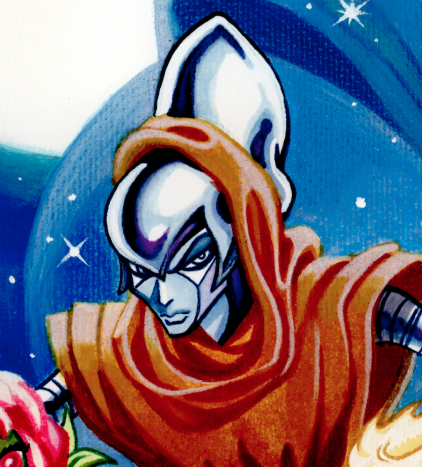 Shimmer is a cybernetic construct with a dubious past. Originally built by the humans of Abode as an embassador to the alien Neverending, he was dismantled and reconstructed with their own alien organic components and sent back to Abode. Though now a conscious being, even Shimmer does not fully understand his true nature. He was sent to a high-security military medical facility by the Skyward for observation, where be befriended Rosie.  He joined The Rebels and took on piloting duties for their spaceship, the Cam Triompe. During their adventures he sustained a grievous injury, and his friends took him to the Neverending’s Mothership Repair Heart, as the damaged components were those implanted by the alien race. There, Shimmer was repaired and reprogrammed by the machine/room/entity. During this work, Shimmer lost his sight and gained a new purpose: to serve as a “Binder” whose duties are to uphold justice and good social order.