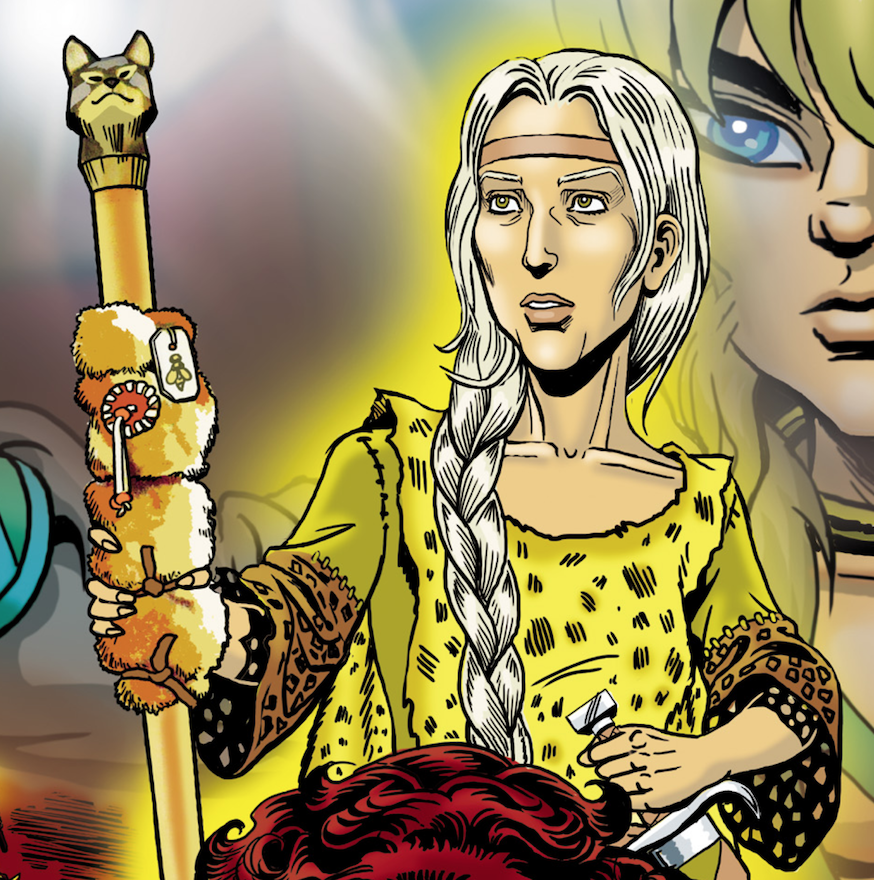 Adopted daughter of Cutter and Leetah;
Adopted sister of Sunstream, Ember and Goldruff;
Former wife of Nunkah and widow of Ikopek (also known as Bee);
Mother of Shukopek;
Companion of Kimo and Shenshen

Shuna is a wanderer, shamaness and teacher whose mission is to promote understanding between humans and all other living creatures, including the elves.

Built of true strength of character, Shuna had a difficult journey early on in life. Finding her courage took time, but she is resilient. Though she stumbled along the way, Shuna always gets back up.

Raised in an abusive household, her father–a mercenary employed by Grohmul Djun–tried to beat Shuna’s spirit out of her from a young age. With help from the “blessed spirits” she encountered as a youngster, she not only escaped his control but led others in a rebellion that would ultimately topple the tyrant himself.

Shuna was just a child when Leetah fell through the roof of her home as she lay mortally ill with “the rot.” After witnessing Leetah heal herself, Shuna’s mother compelled her to do the same for her dying child. This simple act of kindness made Shuna a part of Leetah, and instilled in the young girl a deep belief in the magic and mystery of elves.

Years later, she ran away from home after helping Tyleet escape from her father. Living on the streets, she became enraged by the cruelty of the Djun, and finally incited others to rebel. After Shuna’s followers overran the Djun’s citadel, Cutter offered her a home with the Wolfriders. She accepted, and the elves adopted her.

Shuna loved living with the elves, despite being confused by their ways and awed by their powers. A close bond developed between her and Kimo, who became her constant companion and protector in both wolf and elf form.

Though she began to recover from the abuse suffered at her father’s hands, Shuna found herself in familar territory in her first marriage to Nunkah, which proved to be a mistake. Recovering her strength, Shuna ended their marriage and found love again with the kind and gentle “Bee.” Together, they raised a son, Shukopek, and traveled to many human clans, working to build peace and understanding between elves and the humans of the Iceholt continent.

After Bee was killed, human mortality weighed heavily on Shuna. She asked her elfin mother Leetah to extend her human lifespan so she could continue to spread her message of coexistence and harmony. It was a fateful choice.

Shuna spent many more decades slowly bridging the gap between the human Insect Tribes of Iceholt and the elves, with Kimo and Shenshen at her side. When the Djun’s forces invaded on their crusade to wipe out the Wolfriders, it was through an alliance with the Insect Tribes that they were defeated. Shuna almost lost her life in that battle, and was saved once again by Leetah’s healing touch and the greatest sacrifice from her elfin father Cutter. She emerged even further transformed, the first human to gain the ability to send.