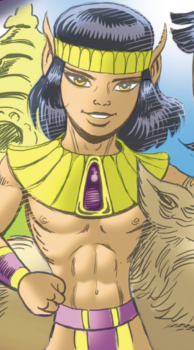 SHOO-shenn (rhymes with who then)

Shushen is one of the original Jackwolf Riders, a protector and hunter for the desert Sun Village of Sorrow’s End. He first left the village on a rescue mission to aid the Wolfriders in their struggle against Winnowill, a mission that ended with the Palace of the High Ones descending into the forest and landing at his feet. He bravely faced the heat of the desert and dangerous humans, but the shock of seeing the legendary Palace was too much and Shushen fainted dead away.

He recovered and like the rest of the Sun Folk and Wolfriders, celebrated the freedom the restored Palace represented. And like the others, he mourned the loss of that freedom when Rayek stole the Palace away into a far future time. Yet, the tiny replica of the Palace shaped by Ekuar as a gift to Savah gave all the Sun Folk something to rally around, Shushen included.

And so, when Kahvi attacked the village to steal the Little Palace, Shushen formed a harsh opinion of all Go-Backs. Though Kahvi wasn’t successful and ended up in wrapstuff, her fellow Go-Back Yun became the focus of Shushen’s resentment, despite the fact that she chose to respect the Sun Villagers and return the Little Palace to Savah.

Shushen’s suspicion of Go-Backs wasn’t totally unfounded. When the rest of the Go-Backs showed up later to finish the job Kahvi started, under Zey’s derelict leadership, Shushen was the first to fall, pierced by an arrow through the heart.

His death sent his devoted lifemate Dart into a kill frenzy. Dart slaughtered Shushen’s killer, and many other Go-Backs, in a blind rage. Though thousands of years have passed, Shushen’s death still haunts Dart.