Stargazer, advisor, navigator of the Palace 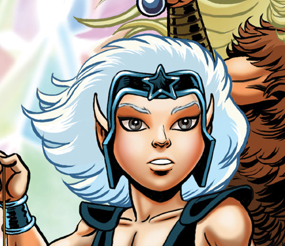 Son of Eyes High and Shale
Soul-brother of Cutter;
Lovemate of Foxfur, Aroree, Ruffel, Maleen, Vurdah, etc.
Father of Yun and Jink
Advisor and mentor to Cutter, Ember and Sunstream

Skywise is the Wolfriders’ dreamer and astronomer, whose love of the stars is matched only by his love for Cutter, his soul-brother and chief. Wise-cracking, sly and perceptive, Skywise has become more contemplative and introspective with age, though no less fond of sharing furs with a long succession of lovemates and other partners. He is becoming a protegé of Timmain herself, the last of the firstcomers, who instructs him in the Palace of the High One’s most arcane functions.

Skywise was named before birth by Eyes High, who understood much about a son she would never know. He never saw his father, Shale, killed by the same humans who kidnapped his mother. Eyes High died after childbirth, though not before impressing upon the orphaned infant his unique connection to their distant, starfaring ancestors.

Once the cool-headed older confidante to his hot-headed young leader, Skywise’s relationship with Cutter evolved as their lives–and the quest–unfolded. 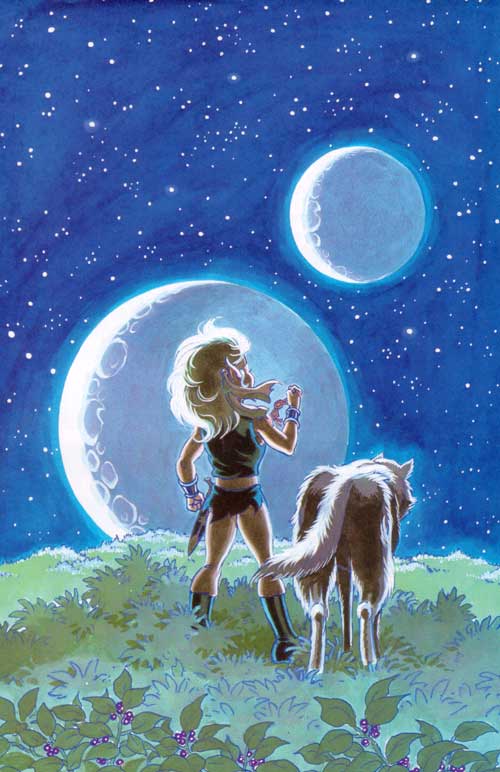 Experiencing something akin to recognition in their youth, the two shared soulnames and were rarely seen far apart. Survivors of Madcoil’s attack, the two consoled one another after the death of Cutter’s parents and Skywise’s lovemate, Foxfur.

Skywise insisted on joining Cutter’s quest to find other elves on the World of Two Moons, and the two experienced many adventures along the way. When the pair were captured by trolls, Skywise’s filching hands saved the day. Overly protective of his soul-brother during their first encounter with friendly humans, he subsequently came to see the scale and breadth of Cutter’s imagination.

Skywise’s winning combination of animal magnetism and stellar aspiration re-awoke a spark of adventure in Aroree, one of the dispirited Glider immortals resident in Blue Mountain. Later, initially finding the Go-Backs cold and harsh, he realized they were warm and passionate: his time in the frozen mountains resulted in at least one child, Yun, who did not meet her father until adulthood.

A stirring of resentment formed when Cutter challenged Skywise to fight alone during the War for the Palace, and he was tempted to remain in the ruined structure after the elves’ victory. But he soon realized that his old friend’s company would be far preferable to that of Rayek.

The relationship between Skywise and Cutter suffered its greatest upheaval when Rayek stole the Palace of the High Ones (containing Skywise and Leetah) ten millenia into the future, stranding Cutter and most of the Wolfriders in the past.

Convinced that he might never see his friend again, Skywise begged Leetah to give him the stars’ own time, cleansing him of his mortality. Cutter and his tribemates survived, spending most of the “lost years” suspended in wrapstuff, though they still aged five hundred years in real time. Ultimately reunited with the Wolfriders, Skywise’s loss of his wolf-blood and the now-vast difference in age between him and Cutter created a profound distance between them. 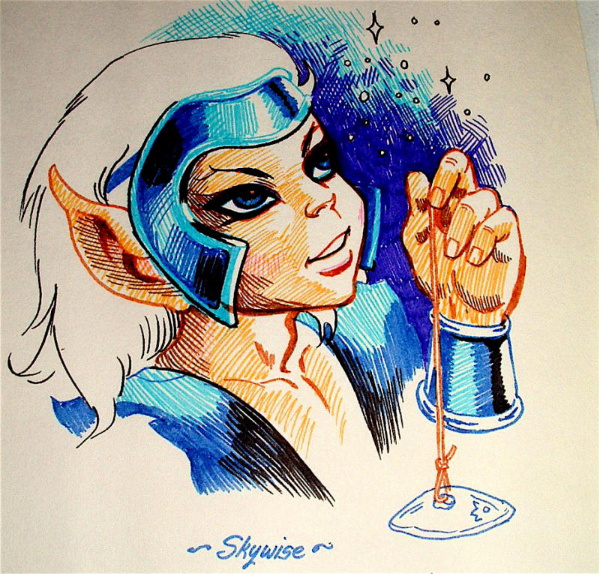 This also triggered an internal struggle within Skywise, as he strove to reconcile his former nature and his newly chosen path. Manifesting first as a bout of feral psychosis, more subtle challenges materialized later as his lupine senses faded, and he found himself an outsider in an older, wolf-blooded pack. Chosen by Cutter to advise his daughter in her new role as chief, Skywise grew despondent when his suspicion of a mysterious newcomer was ignored, and he sought solace exploring the nascent potential of his own immortality.

Finally reunited at the culmination of the Shards war, Skywise and Cutter reconciled and have since enjoyed calm times. A worshipful student of Timmain, Skywise has found a true home within the Palace of the High Ones, where she teaches him how to navigate and manipulate the ancient vessel.

Skywise’s most prized possession is the Lodestone, taken by Cutter from the Troll king Greymung at the outset of the quest. Serving as both a compass and magical talisman, this sliver of stone perfectly embodies the quest for knowledge and the spirit of wonder in Skywise’s character.