Before Cutter’s time, the Wolfriders’ past is a murky and uncertain place, far from the now of wolf-thought. But for the stories–and the dreamberries that sharpen the tribe’s deepest memories–the names of the dead even might be forgotten entirely. Reinforced by howl and habit, though, the ten chiefs’ exploits are as true as anything the Wolfriders know–even if the howlkeepers are not averse to a little elaboration, here and there…

Timmorn Yellow-Eyes was first chief of the Wolfriders, the offpsring of Timmain and a true wolf. Tall yet lupine, he stood on two legs and possessed brilliant yellow eyes, sharp teeth and a guttural voice. Red-gold fur covered him head-to-toe.

Raised at first by Timmain while she was in wolf form, she brought the young cubling to her former tribesfolk before disappearing for good. The elves taught him to speak, to send and “to love his mother’s kind as well as his father’s.” Ferocious and powerful, Timmorn become the protector of elves and wolves alike, forging the two groups into a firm and enduring alliance.

As an ice age crept down from the north, Timmorn sired cubs both in and out of Recognition, forever proud of his mixed blood—blood which flowed through many generations of Wolfrider chieftains and their kinfolk. Despite his strength, though, Timmorn was often shy and nervous, never fitting completely into either society. He found it difficult to maintain balance between his warring halves, a wolfen side that could not comprehend the passage of time, and the elf in him who understood the changes of the seasons. 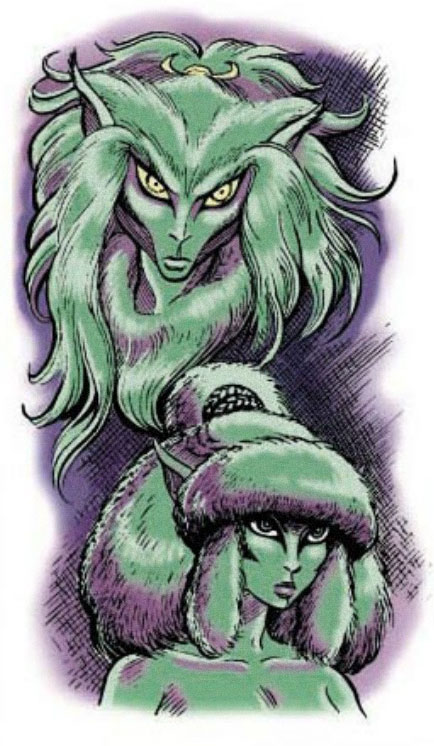 Inheriting something of his mother’s shapechanging magic, his appearance would alter as starsong or wolfsong became temporarily ascendent within. Eventually, encouraged by his mother’s example, he gave himself up completely to the wolves, finding the peace that he had long sought.

Timmorn lived with the Hunt for many seasons, then finally vanished forever.

Rahnee the She-Wolf was second chief of the Wolfriders, and like her father, lived between two worlds. Strongest among Timmorn’s children, she worked to unite the disparate sides of the tribe. She brought back Timmorn’s wolfpack to bond psychically with the elves, and was first to codify elements of a way (if not the Way) beyond naked survival: not to hunt out of cruelty, jest or for the lust of killing. She therefore led the first true Wolfriders, in principle as well as practice.

With her lifemate, Zarhan Fastfire, the last of the pure elves with the ability to control flames, she had many children. After Rahnee was presumed dead, he left the Wolfriders to search for her. Though he found her, they did not Recognize again, much to his dismay. 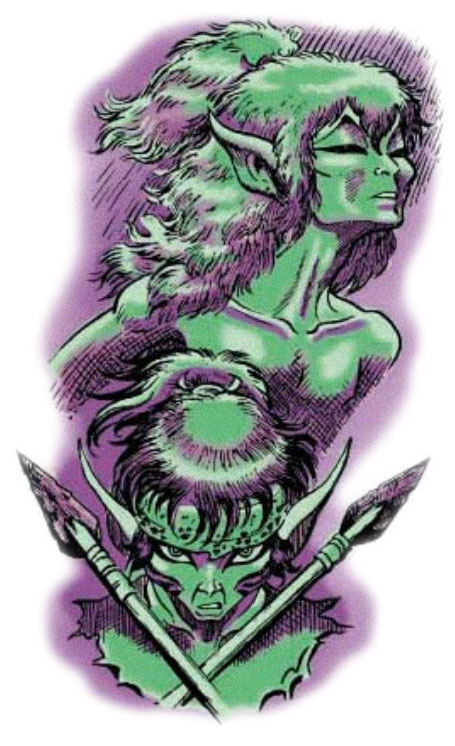 Prey-Pacer was the youngest son of Rahnee and Zarhan, so attuned to the animals that he had trouble communicating telepathically with other elves. This affinity was to help the tribe, however, when dangerous reptilian allos lumbered into the Wolfriders’ territory. Though chief in an early and dangerous time, he was humble and sought the advice of his tribe in major decisions.

Two-Spear, known as Swift-Spear in his youth, was the Wolfriders’ fourth chief and their and most troubled. His story is full of wild emotions and irrational impulses, lifted by glimpses of a kinder and gentler side. It is in the former nature, though, struck through with hatred for humans and conflict with his sister, Huntress Skyfire, that his legend rests.

His beloved wolf, Blackmane, was killed while the two were psychically connected; a trauma that seeded the madness for which he became famous. A chief’s soul without a chief’s head, his attacks escalated until he planned to directly assault the human settlements near the Wolfriders’ woods, and eradicate the inhabitants. Skyfire opposed him, understanding that his wrath would result in annihilation. Though Two-Spear won the inevitable challenge, his victory was pyrrhic; he left with his remaining followers. 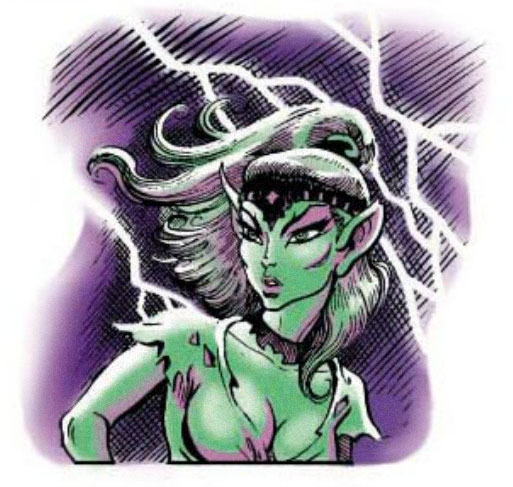 Huntress Skyfire, daughter of Prey-Pacer and Wreath and half-sister of Two-Spear, was fifth chief of the Wolfriders. Given her Huntress title by her brother, it proved a hollow gift: he led all the hunts himself and rarely acknowledged her considerable talents and fierceness.

At odds with her crazed brother much of her life, she eventually challenged him when he embarked on a plan of action certain to lead to the tribe’s end. Instead proposing avoidance of the human threat, it was in defeat at his hands–and victory at his subsequent departure–that an awareness of the tribe’s essential balance formed within her, an understanding that allowed Skyfire to create the Wolfrider code of life, The Way: “a tribe that hunted, howled … and survived.”

Skyfire, to the elves, means both sunset and lightning; both interpretations suited her temperament well. 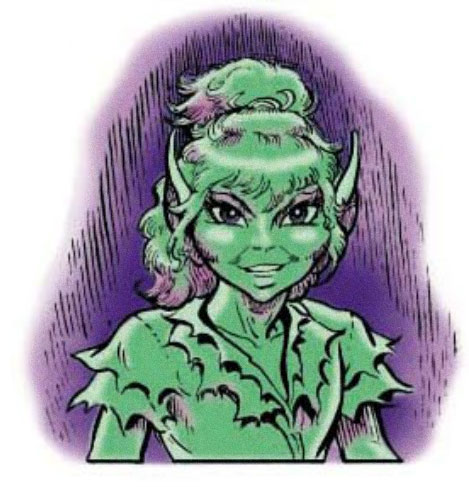 Freefoot was the Wolfriders’ reluctant sixth chief, fortunate enough to lead during a calm period in the tribe’s history. Named in mocking honor of his disinterest in leadership–he would “rather wander around than be chief”–he nonetheless made his mark, devising gentler pursuits for a clan accustomed to violence and despair. The natural world, of course, still offered its own dangers.

Taal, a sport for teams or individuals that hones hunting and tracking skills, was one such invention; the game seems to have fallen out of favor by Cutter’s time. 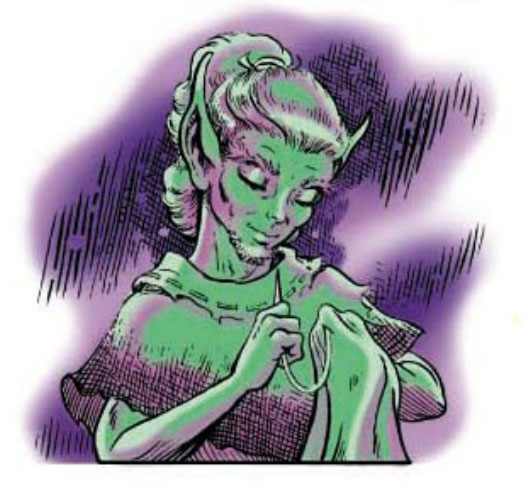 Tanner, originally named Oakroot, was Freefoot’s son and the seventh chief. Thinking himself a mediocrity, Oakroot described himself as a bow with no string, as smoke without fire. Though his skills as a hunter and fighter were limited, he developed an unusual gift for bonding with animals.

One of the longest-reigning Wolfrider chieftains, his many centuries passed in the welcome absence of hostile humans. When humans did encroach, their presence proved useful, for once: Tanner earned his name after human hunters urinated upon a bundle of skins he was storing, leading to an insight concerning the working of leather that would ultimately benefit all.

Some 800 years rolled by, Tanner persistently working to improve the quality and comfort of the tribe’s clothing. Though he recognized Stormlight and the two eventually became lifemates, Tanner’s family life was preceded by centuries without romance; he did not take so much as a lovemate in all that time.

Goodtree, daughter of Tanner and Stormlight, was the Wolfriders’ eighth chief.

A sensitive, moody child, so attuned was she to green, growing things that she actually wanted to be a tree. From this love sprang Goodtree’s lasting legacy to her tribe: the vision and subsequent creation of Goodtree’s Rest, a living home for the Wolfriders formed from the roots and boughs of the enormous Father Tree.

At the time of her father’s death, Goodtree had yet to find her soul name and refused the chief’s lock. Embarking on a Spirit Quest, Goodtree not only found herself, but also her magical potential and the standing timber that would become The Holt. 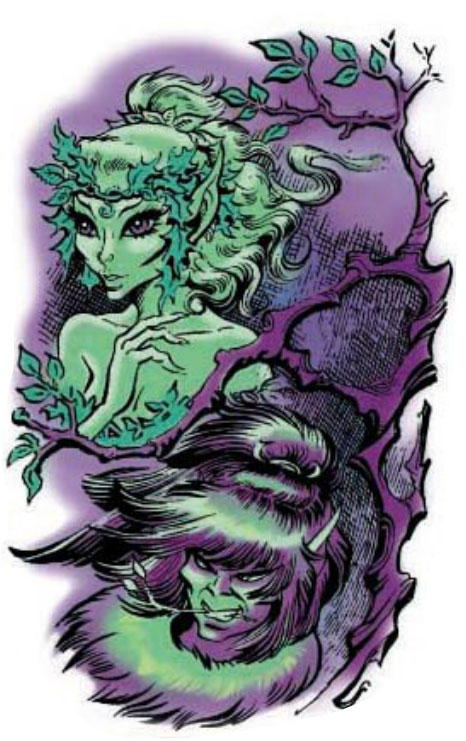 She took two lovemates, Acorn and Lionleaper, finding gentleness in one and strength in the other. The hard-won equilibrium was upset, however, when Goodtree recognized the latter. Torn between her desire not to hurt Acorn and the insistence of Recognition, she fought the inevitable–as did Lionleaper–leaving it to Acorn himself to persuade the two to join and complete the union.

Mantricker, ninth chief, was Goodtree’s son and the self-appointed nemesis of the five-fingered ones. Though his interactions with the humans were generally good-natured pranks–he even formed a longstanding friendship with a human counterpart, appropriately named Demontricker–their rapprochement only delayed the inevitable.

As humans moved further and further into the elves’ territory, Mantricker attempted to chase them away by spooking their game, stealing weapons and food, springing their traps, and damming the creek that provided water to their village. Frustrated, Mantricker openly confronted the humans and demanded that they leave, and, in a final act of desperation, lured a human child into the forest and drew its blood to make his warning clear.

Enraged at what had been done to their child, the humans attacked Mantricker, gouging him as he fled; he lived only long enough to admit his folly to his son.

All dark angles and bright grins, Bearclaw (full article) was given to bouts of wild mirth and dark brooding, to joy and love and reckless abandon. Described by Pike as “sly-featured, bewhiskered, and ragged–one who stabbed through life ungently,” the Wolfriders’ tenth chief developed a taste for retaliation and revenge that brought his tribe to the brink of destruction.

Living for well beyond a thousand years, Bearclaw watched as the nearby humans’ resentment solidified into an enduring hatred, but it was Madcoil’s attack that finished him, leaving a young son, Cutter, to embark upon the quest that would unite the remaining elves on the World of Two Moons. 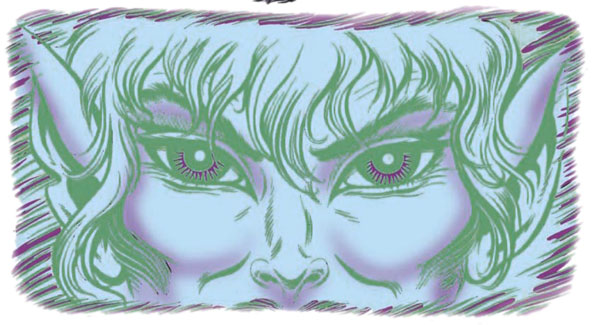