Twenty-Five Times ElfQuest Made Us Laugh

ElfQuest is a high fantasy tale, but that doesn’t mean there’s no room for some humor. Here are twenty-five times the denizens of the World of Two Moons made us laugh.

Skywise Deflates Cutter’s Ego
Those who are closest to us can call us out on our own drama and put things back into perspective (eventually), and no one can do that for Cutter more masterfully than Skywise.

Skot Teases Cutter
Leave it to a Go-Back to defuse a tense situation with a smarty-pants comment.

Picknose Steps in Pony Poop
Trinket is a spoiled princess even in adulthood and knows that her father Picknose is a pushover to her bossy demands. But sometimes even Picky puts his foot down…and still manages to screw it up. 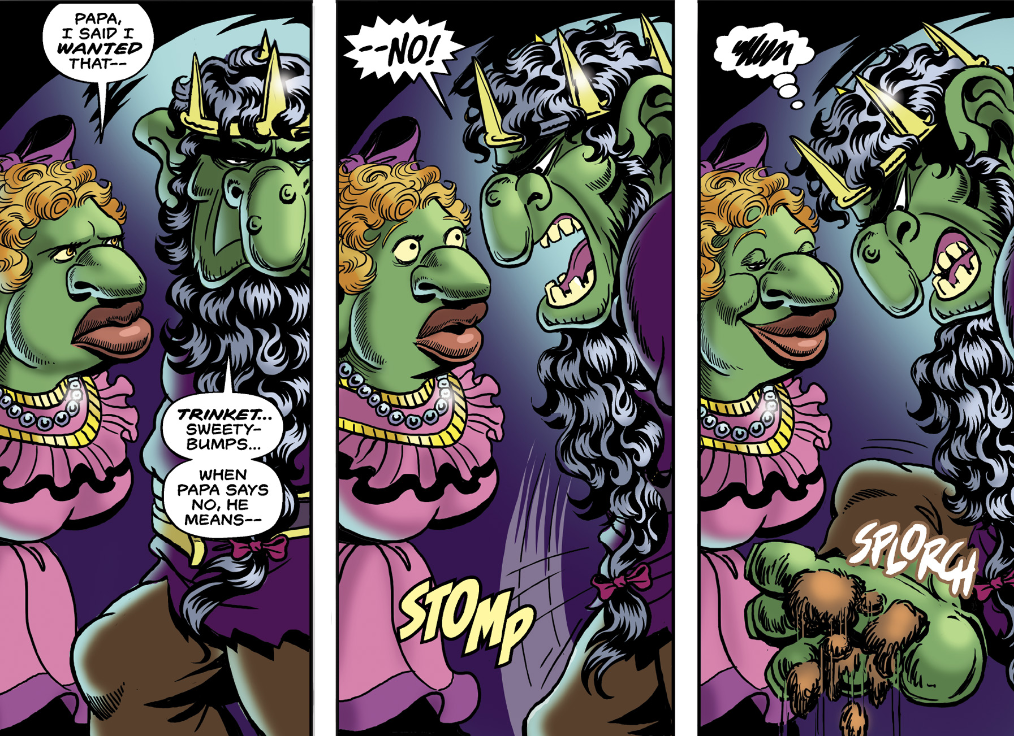 Tyleet Sees Moonshade and Strongbow
Wolfrider children aren’t sheltered from the notion of physical love between lifemates, which meant Tyleet was well-prepared for the eyeful she got down by the waterfall. 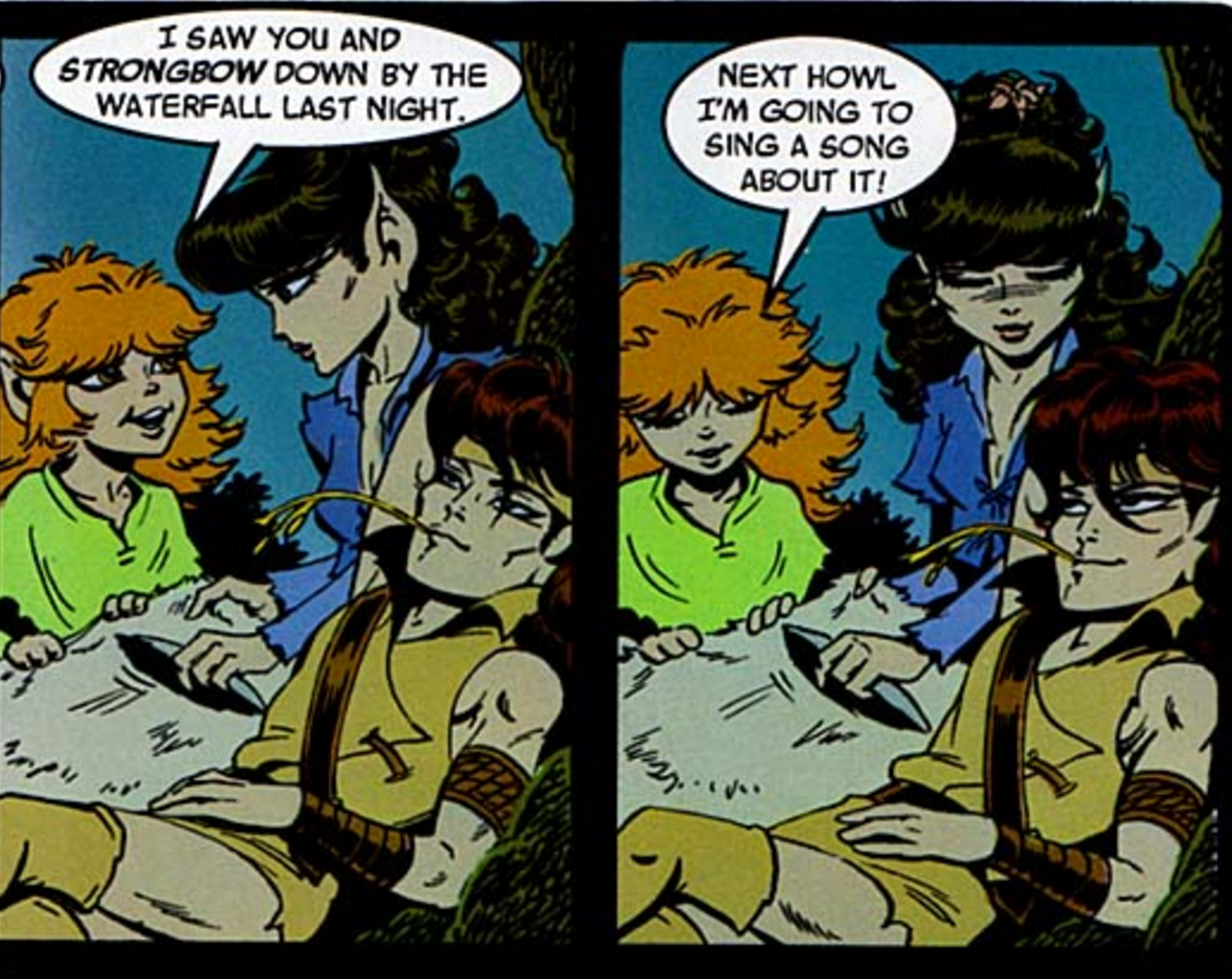 Shenshen Teases Leetah
Shenshen was Cutter’s biggest supporter as suitor for her big sister Leetah, and she let her gaggle of gossips know it with a little innuendo. 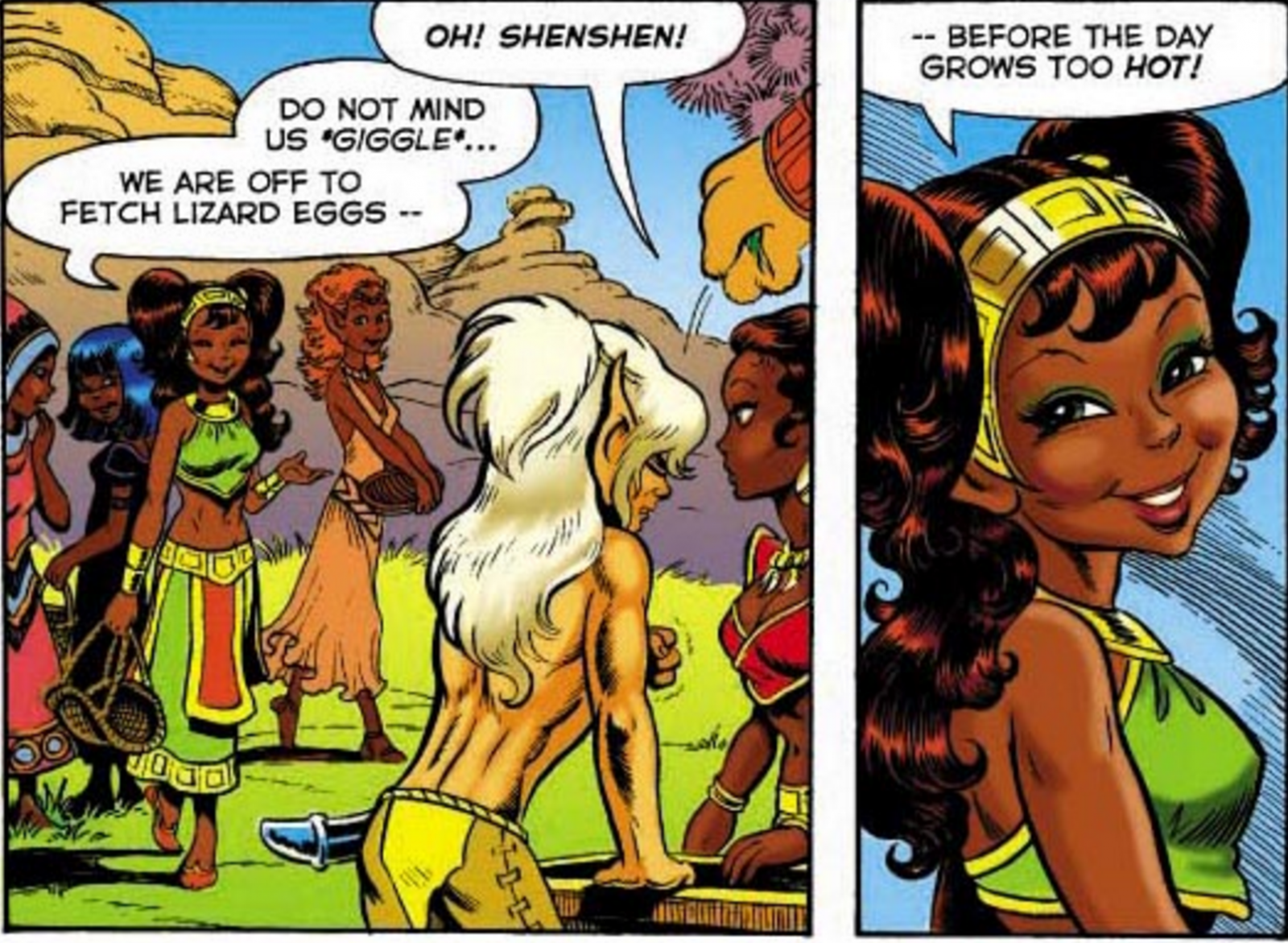 Skywise Got Game
No one has more game than Skywise, to Ruffel’s delight.

Newstar Uses Skywise’s Moves on Him
Growing up in the Sun Village under the influence of the likes of Shenshen and Ruffel, it’s no wonder Newstar grew into a maiden that could beat Skywise at his own game.

Newstar Takes Dart Down a Peg
When her age-mate Dart got kudos for creating the Jackwolf Riders, Newstar made sure his head didn’t get too big with a little light-hearted teasing.

Ember Insults Lord Voll
Even on the World of Two Moons, children lack the social filters of adults, and when they do it’s just as funny as it is in real life. 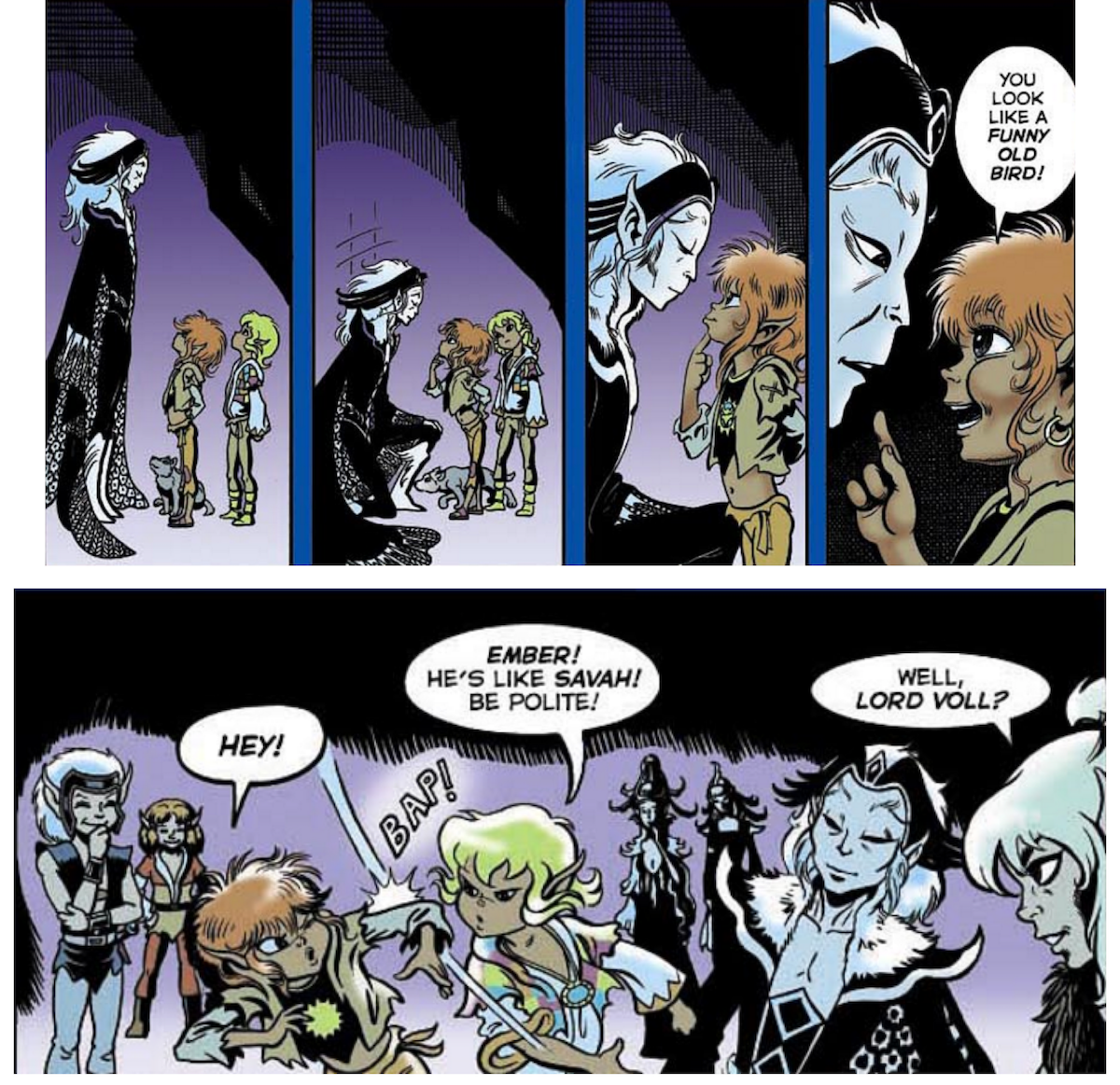 Skywise Gets Rid of Cutter
In their youth, Cutter stuck to Skywise like a burr. That created problems when Skywise wanted some alone time with his lovemate Foxfur, so the amorous lad had to find humorously creative ways to occupy his younger friend. 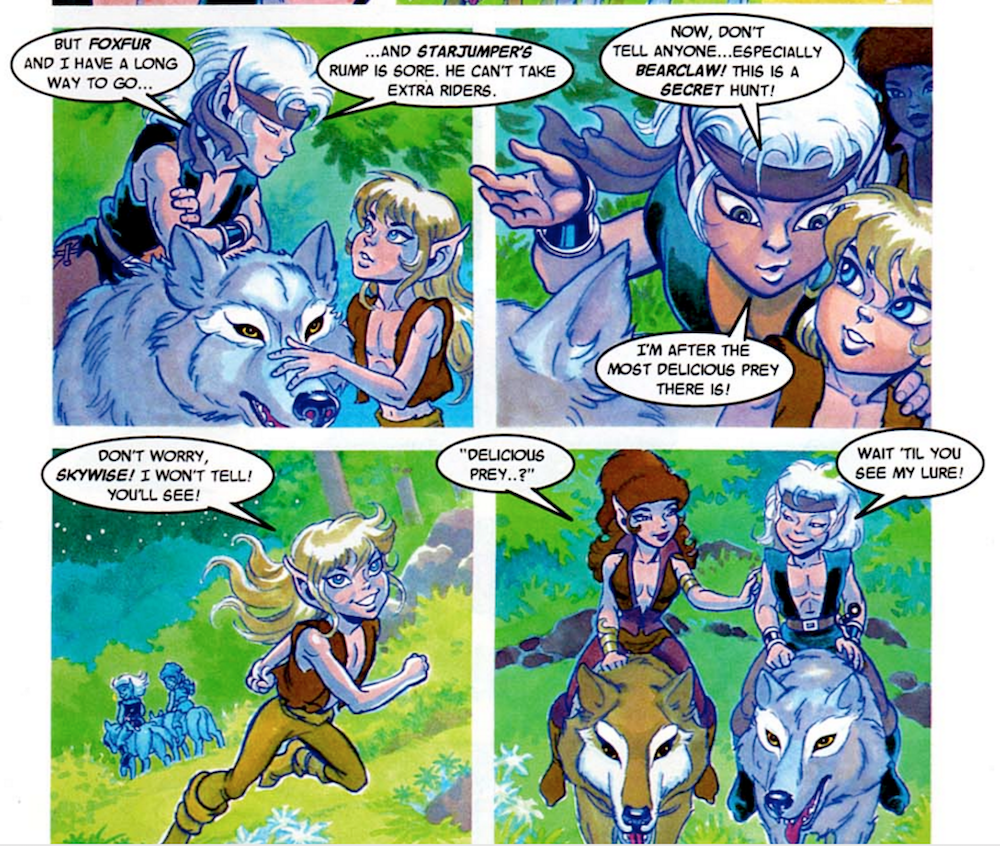 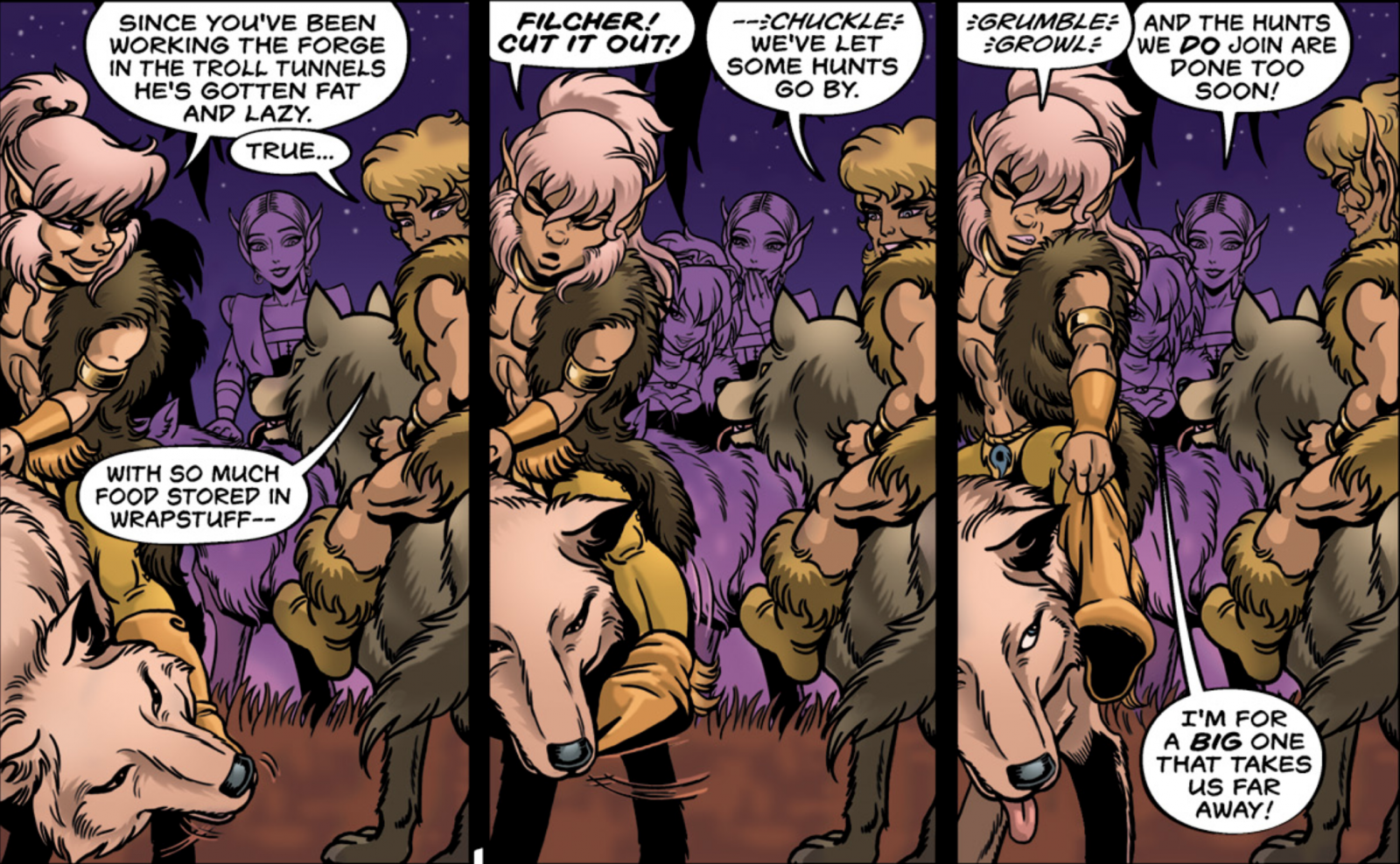 Skywise and Leetah Plot Against Cutter
As chief of the Wolfriders, Cutter comports himself as an authoritative leader, but that never stops his lifemate Leetah and brother-in-all-but-blood Skywise from plotting behind his back–literally–to do what’s best for him. 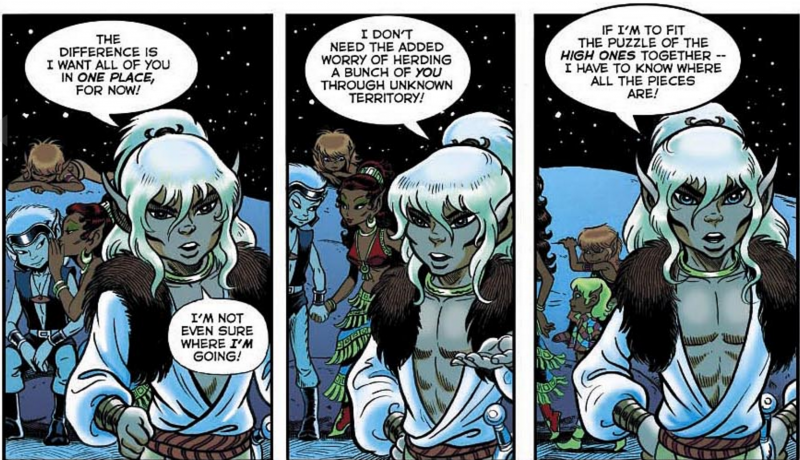 Skywise Breaks the Fourth Wall
Skywise gently hints to Shuna about the joys of joining in his signature sly style. The fact that he’s looking at the “camera” when he says it is a hilarious wink-wink, nod-nod to the reader. You can totally imagine his eyebrows going up and down. 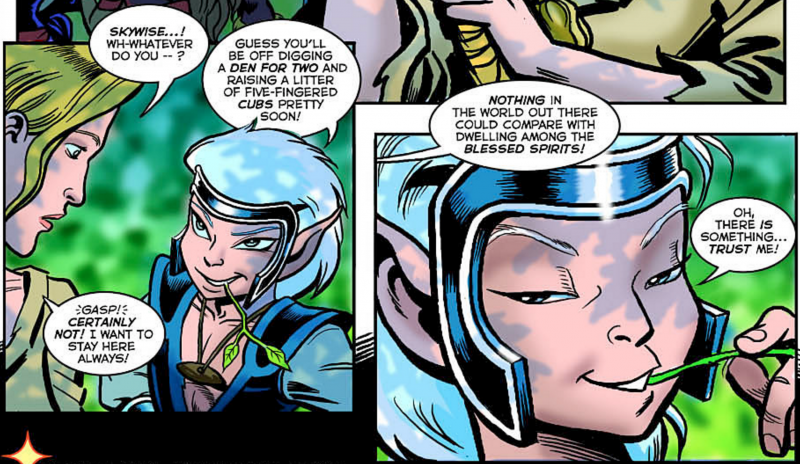 Rayek Contemplates Death
The prospect of life with a corrupt spirit living inside him doesn’t faze Rayek, but the threat of being under the care of a doting preserver that sings off-key is enough to drive him to want to end his life.

Kullyn Kenn Gets Busted
When Kullyn Kenn gets busted in his lie about Jink and Tamia fighting over him, Firstborn Newbreed’s reaction is priceless. 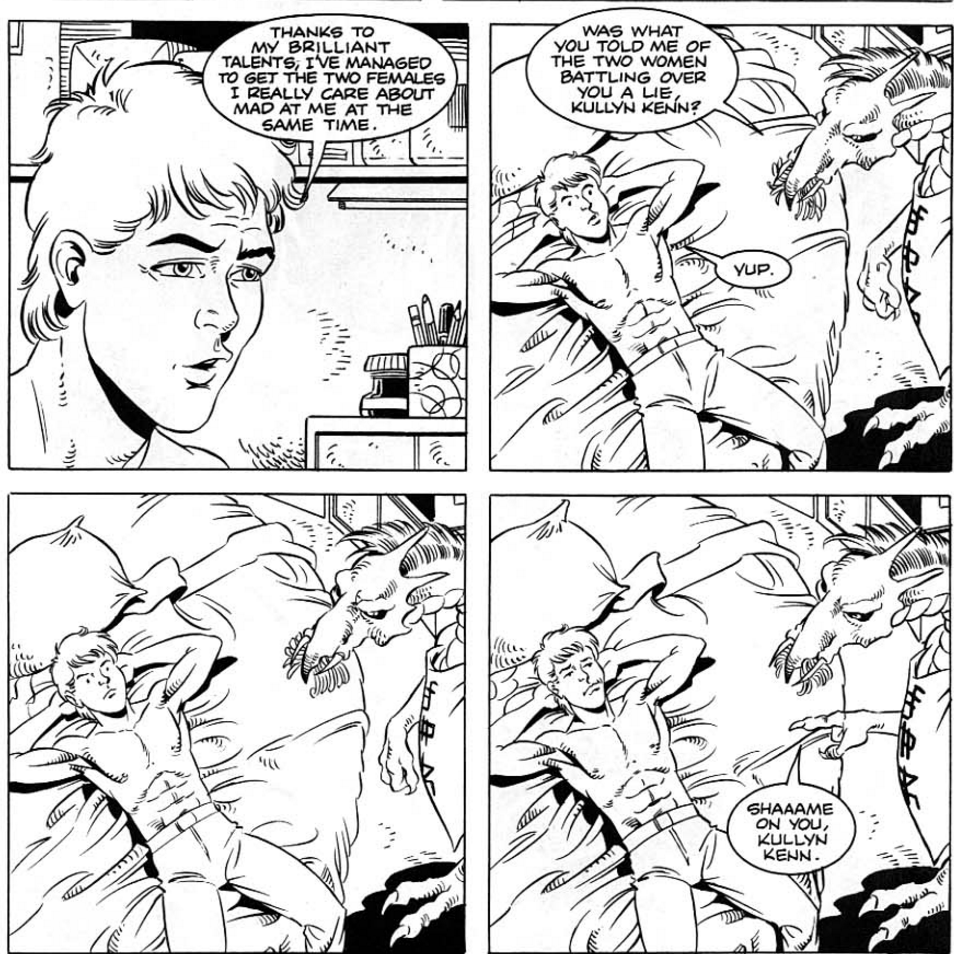 Cutter Kicks Pike Out of His Tree
It’s hard to say what’s funnier, Pike’s dream of turning into a dreamberry and being eaten and then pooped out by a troll, or Cutter’s reaction to it. 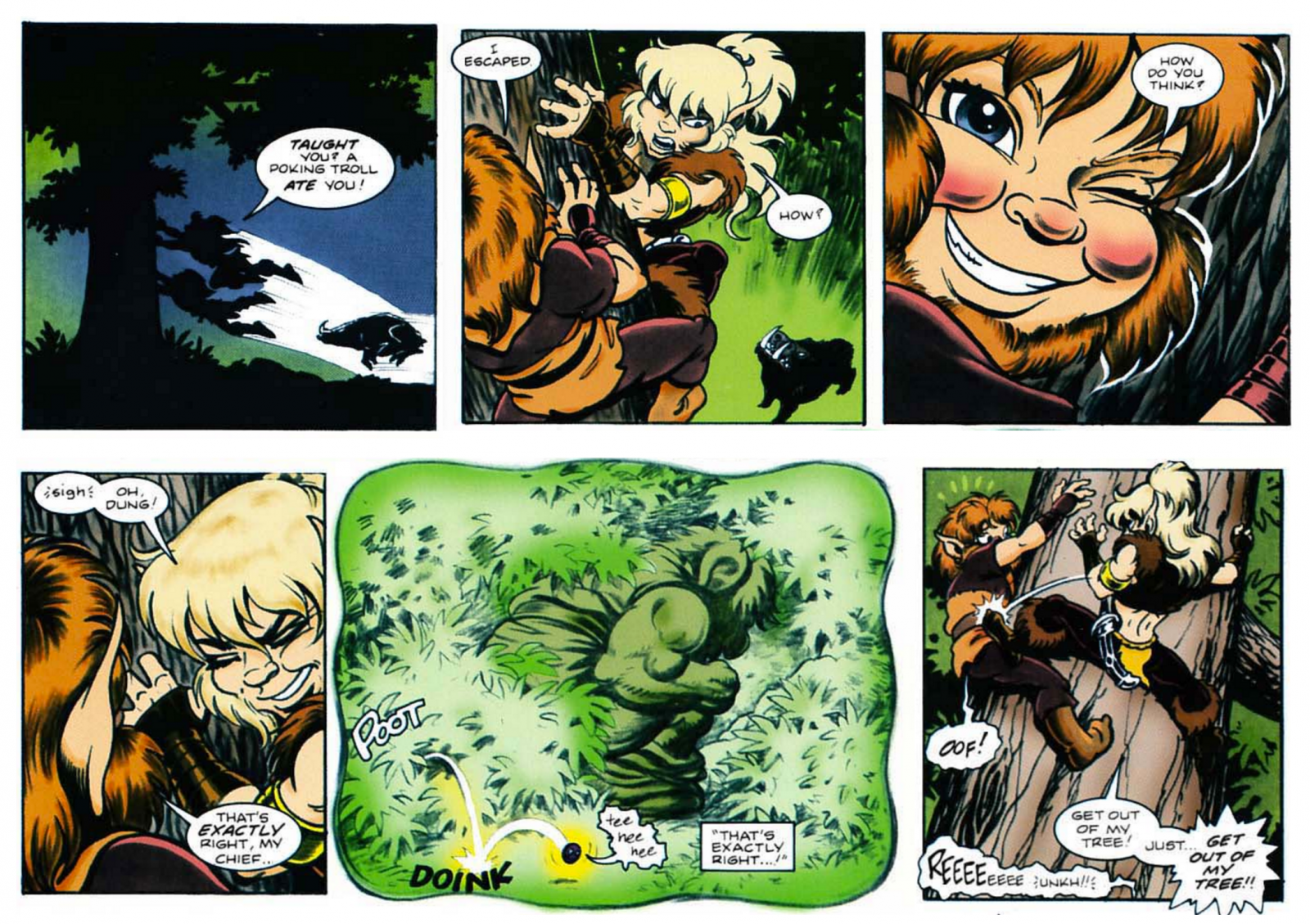 Rayek Puts Ember in Her Place
Even serious Rayek has a sense of humor, and used it to take young chieftess-to-be Ember down a notch when she got a little too cocky. 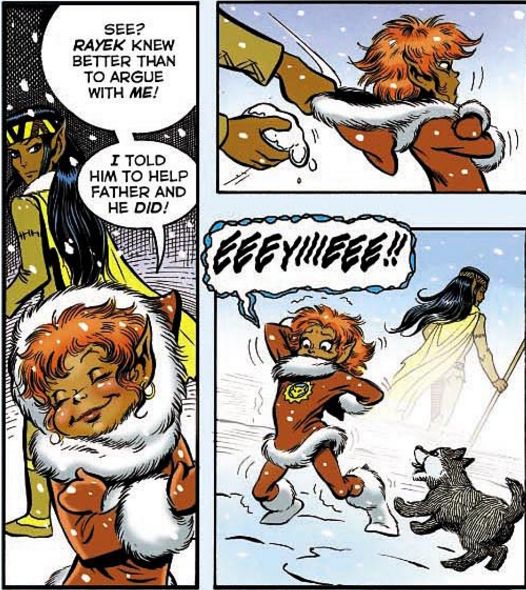 Warfrost Demands Scratchies
Cutter might be the “Chief of Chiefs,” but that doesn’t exempt him from his obligation to deliver scratchies to wolf friends. 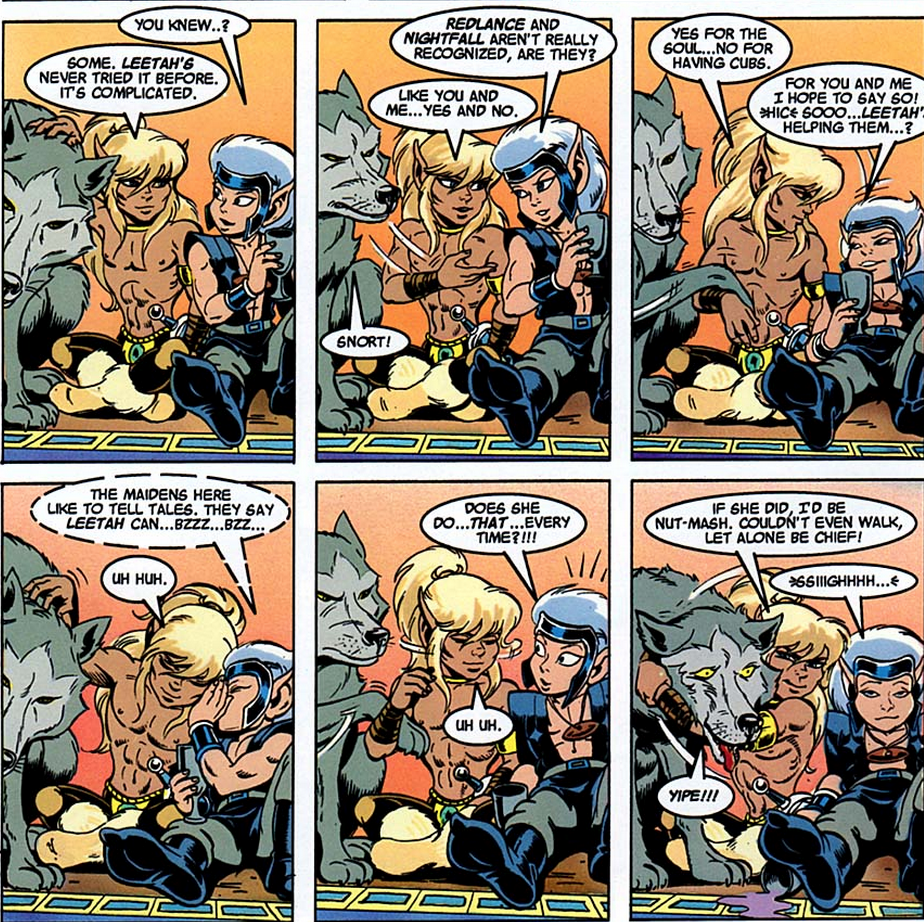 Cutter Licks Oddbit
Dreamberry wine is potent stuff and can cause hallucinations, which Cutter learned the first time he tried it and confused Oddbit for his lifemate Leetah. 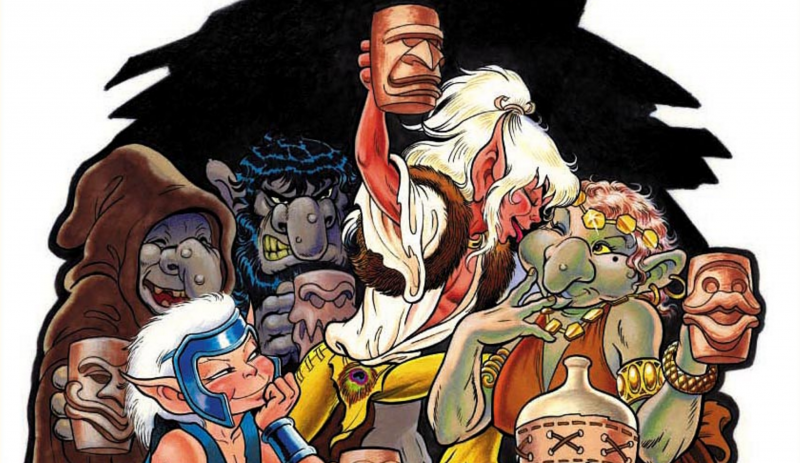 The Reason for Cutter’s Haircut
When we first see Cutter at the beginning of the Siege at Blue Mountain adventure, his hair is noticeably shorter. The reason why never fails to bring on a snicker. 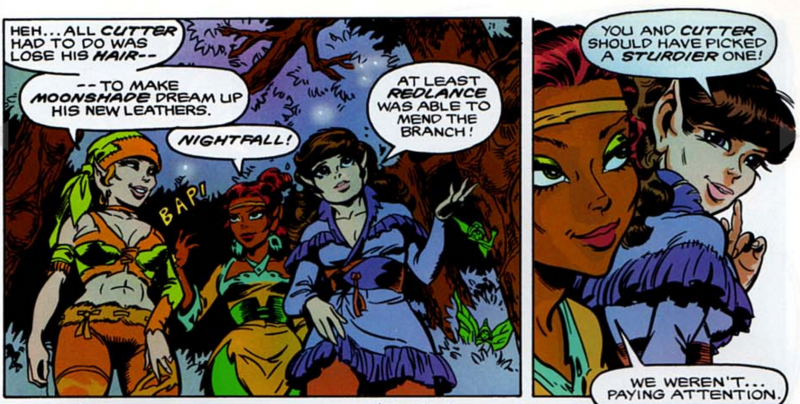 Chitter Talks
Strongbow and Moonshade are two of the quietest, most secretive Wolfriders. Their daughter Chitter, not so much. You can’t argue with her logic either. 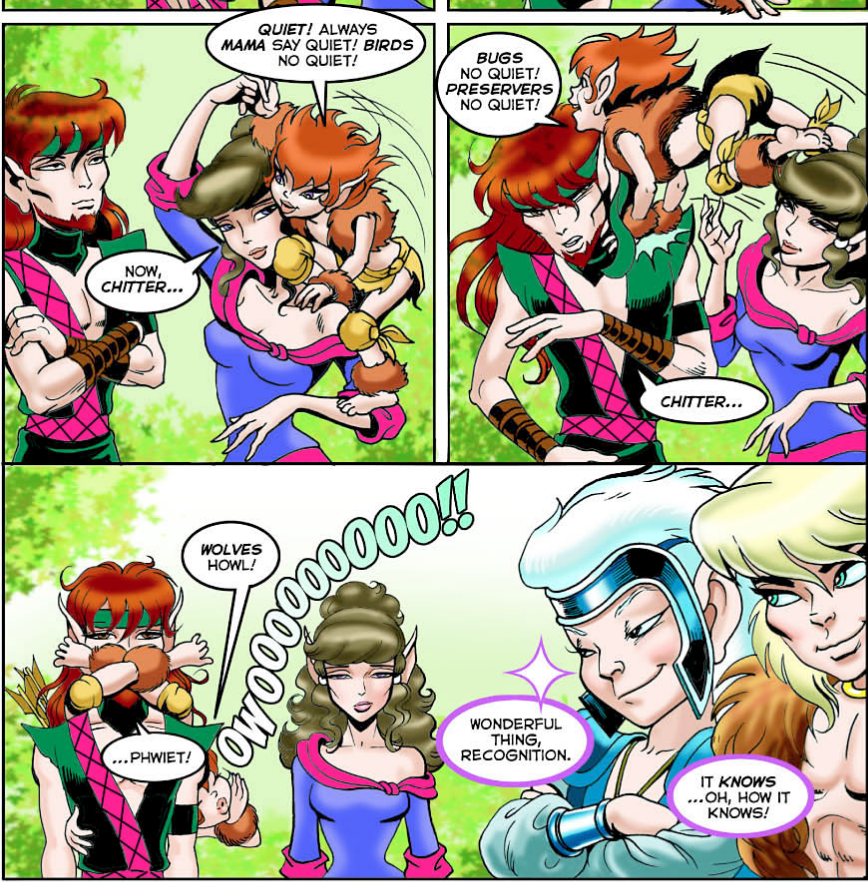 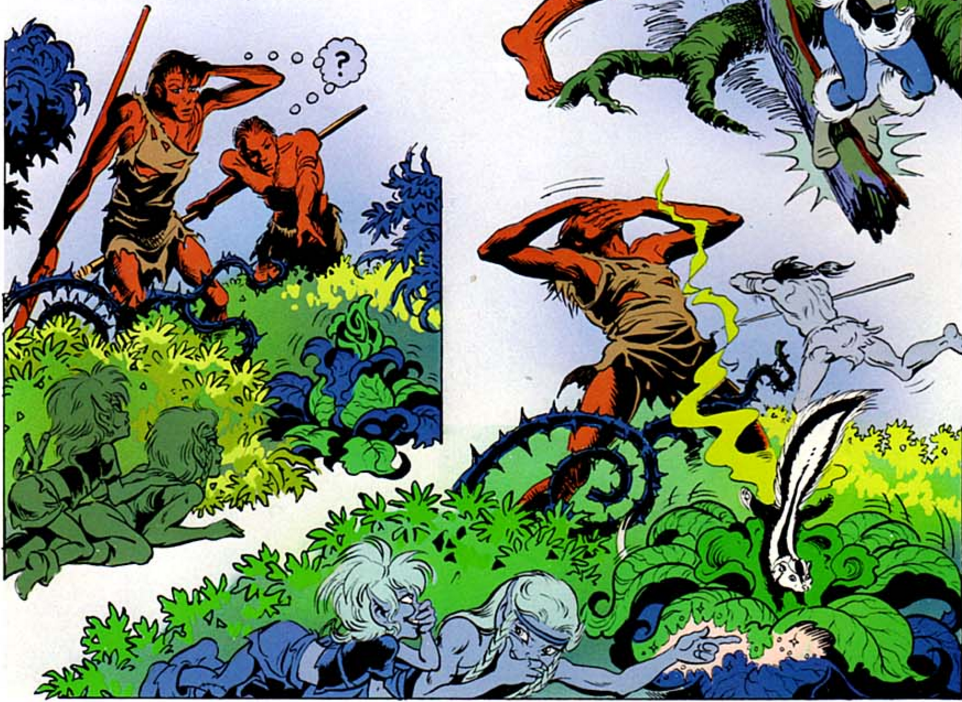 Petalwing Gets Drunk
The preservers are pretty funny all by themselves, but give them some of Maggoty’s dreamberry wine and their comic relief quotient goes up even higher. 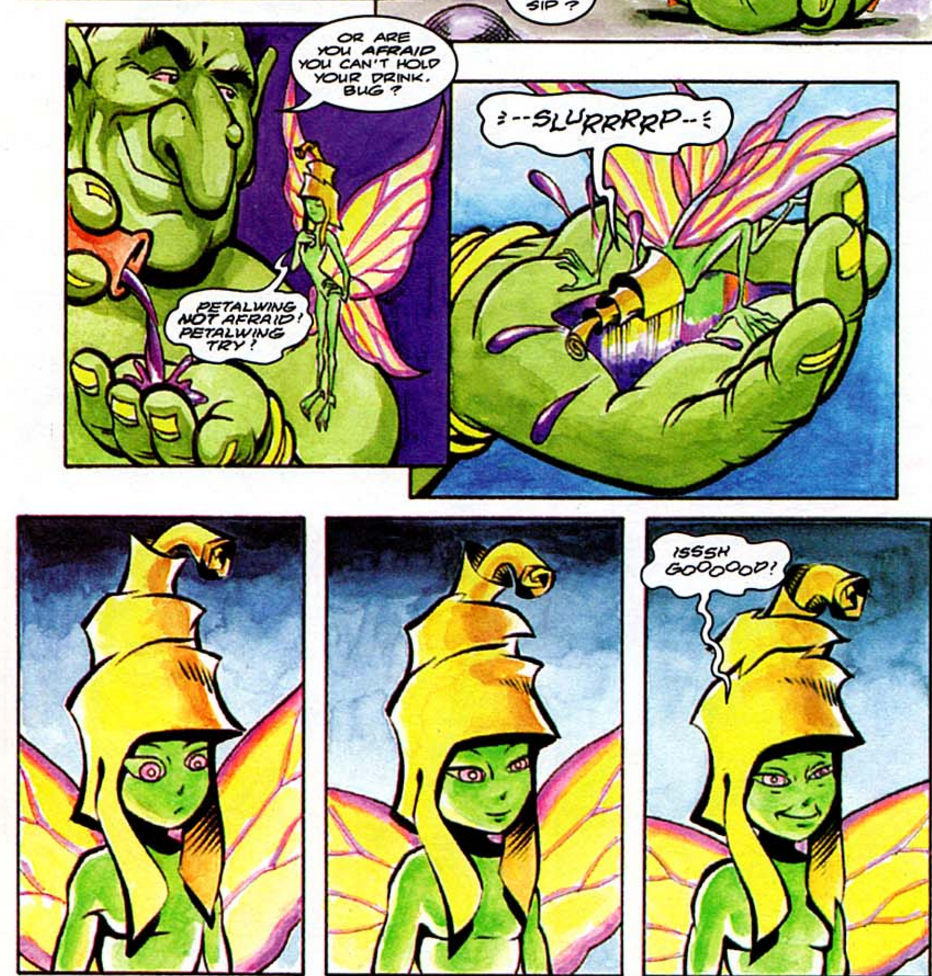 Nightrunner Takes off With Leetah
Nightrunner was famously  loyal to Cutter, but not so much that he wasn’t above giving his elf-friend’s new lifemate a wolfen joy ride.

Skywise Shushes Cutter
…’cause Skywise is a wise-ass. 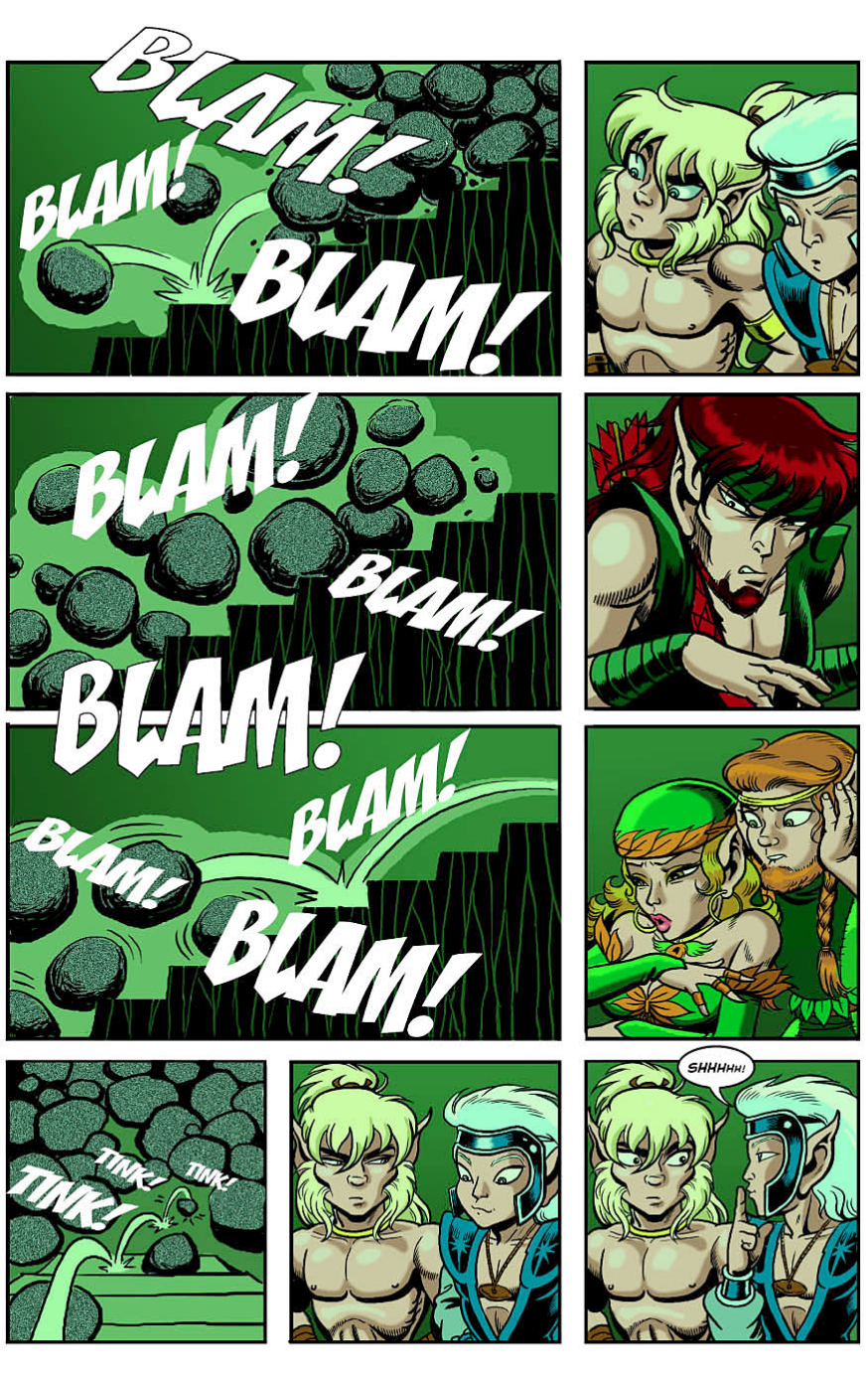 BONUS: Nat Gertler’s entire “How Not to Write ElfQuest” story is a side-splitter. 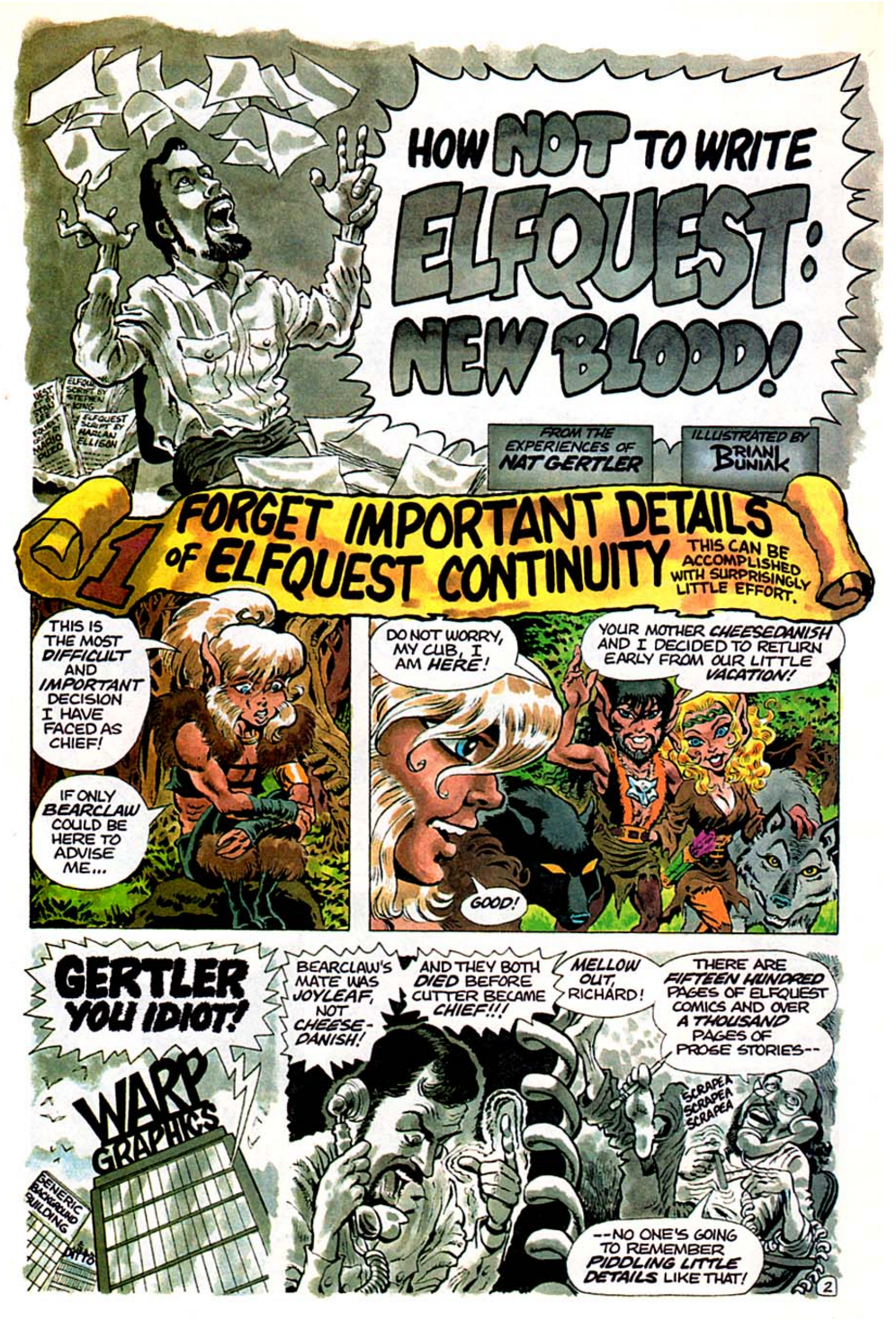 Let us know which funny moments are your favorite, and if we missed any.