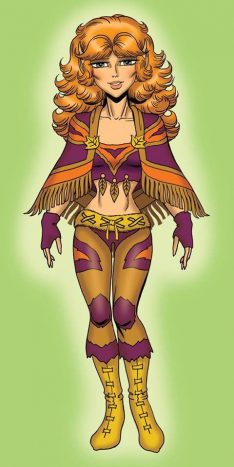 Daughter of Nightfall and Redlance;
Lifemate of Scouter and Dewshine;
Mother of Pool and Little Patch.

Tyleet, the only child to be born to the Wolfriders during the Palace’s long absence, is a gentle yet persistent Wolfrider, eager to take risks in accomplishing her ends.

Recognition never struck her parents, Redlance and Nightfall, so they sought help from the powerful healer Leetah in order to conceive. Tyleet’s name translates to “Healer’s Gift,” a reflection of her parents’ gratitude for Leetah’s help in creating a cub.

Tyleet’s soft heart extends especially to humans, with whom she is convinced peace and good relations are possible. She adopted a human infant, Little Patch, and raised him as a Wolfrider. Though his human nature asserted itself-by inclination and inevitability—he left two worlds the better for it. Her belief that humans can be friends sometimes backfires, as it did with the human girl Gifa. But her friendship with the Woodcutter allowed the Wolfriders to learn the Djunsland human tongue, which proved to be a big strategic advantage in both war and friendship, and that same penchant for human language helped solidify the alliance with the Insect Tribes of Iceholt against the Djunsmen seeking to destroy Father Tree Holt.

As calm as her father, Tyleet is not above breaking rules if she thinks it’s for the good of the tribe. Pike even made a song about her that goes, “Try–just try to refuse her anything.” Still, Tyleet is not reckless, though she admits that she sometimes acts first and thinks of consequences later.

Tyleet apprenticed with master tanner Moonshade and took on the duty of creating leathers for her branch of the Wolfriders when the tribe split in two.

She Recognized Scouter and gave birth to a son, Pool. Tyleet, Scouter, and Dewshine joined in a three-mating, cementing the bond by voluntarily exchanging their soul names. For decades the family followed Chieftess Ember at Howling Rock and High Winds Holts, but returned to the Father Tree Holt when the two Wolfrider tribes reunited.