AFTER 40 YEARS, WENDY AND RICHARD PINI HAVE ANNOUNCED THE CONCLUSION OF THE LONGEST RUNNING AMERICAN FANTASY COMIC BOOK SERIES – ELFQUEST

Following The Release of the Final Issue on February 28, The Pinis Will Embark On a Year-Long “40 Years of Pointed Ears” Appearance Tour

Poughkeepsie, NY— On February 28, 2018, the fantasy graphic novel series ElfQuest will come to its grand conclusion, ending a four-decade run with the publication of issue 24 of the comic series “The Final Quest.” America’s longest-running fantasy comic book series, with tens of millions of copies of comics and graphic novels in print worldwide, ElfQuest will come to an end on the same day it first appeared 40 years ago, February 28, 1978. 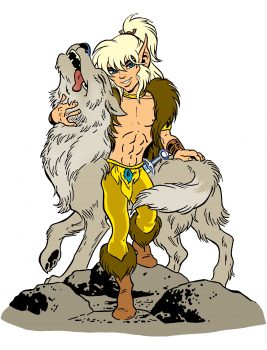 To celebrate, creators Wendy and Richard Pini are embarking on the “Forty Years of Pointed Ears” tour, a year-long victory-lap of appearances that will take the Pinis across the country and even to Europe. At each appearance on the tour, the Pinis will be available to meet fans, answer questions, take photos, and sign books and other ElfQuest merchandise. In some locations, the Pinis will also speak or participate in panels. “We’ve been out of the public eye while wrapping up this huge saga,” says series co-creator, writer, and artist Wendy Pini. “Fans have begged us for years to appear at this bookstore or that convention, and now we finally have the time to do just that.”

The Pinis are also launching a special social media campaign and exclusive giveaway. Fans who share photos on Twitter, Facebook or Instagram using the hashtag #FortyYearsofPointedEars that feature ElfQuest books, other merchandise, or cosplay will be entered to win an exclusive ElfQuest Prize Box filled with items selected by the Pinis themselves. The box will include goodies from the ElfQuest archives that are not available from anyone other than the Pinis (potential items include books, comics, and long out of print merchandise). The box will also include an original convention-style sketch of an ElfQuest character done by Wendy Pini herself. The winner will be selected at random and announced in December 2018.

ElfQuest was originally self-published by the Pinis out of their small apartment in southeast Massachusetts. Independent comic book titles at the time typically sold a few hundred copies, so ElfQuest’s first issue print run of 10,000 created a sensation. It quickly sold out and went back to press for additional printings, a then-unheard-of practice. “We had no idea it would take off like that,” says co-creator and editor Richard Pini. “All we wanted to do was tell the story and not go broke doing it.” By the wrap-up of the title’s first series in 1984, sales had reached 100,000 copies, competing with a number of X-Men and Batman circulation figures.

Still owned and shepherded by solely by the Pinis, ElfQuest can claim a number of superlatives. It is the longest-running American fantasy comic series. It has been called “the first American manga” in recognition of Wendy Pini’s art, a unique blend of Eastern and Western styles. It was voted the “Most Life-Changing Graphic Novel” by Buzzfeed, selected as one of NPR’s “100 Favorite Comics and Graphic Novels,” and is a New York Times Best Seller. It is the only independent title to have also been published (under license) by the three largest US comic book publishers: Marvel, DC Comics, and Dark Horse Comics.

While the Pinis are stepping back from the daily grind of comics creation after forty years and are wrapping the main storyline they began in 1978, this is not the ultimate end of ElfQuest. Dark Horse Comics is currently publishing a series of graphic novel collections and the Pinis stand ready to serve as story and art advisors on future ElfQuest projects.

New dates may be added throughout 2018. Get the most up-to-date schedule here.

ElfQuest follows the adventures of a forest-dwelling tribe of feral elves who have allied with wolves. Their leader — Cutter, Blood of Ten Chiefs — must complete his own “hero’s journey” as the elves roam their earth-like but fantastic world seeking both a safe haven to live as well as answers to the riddle of their very existence.