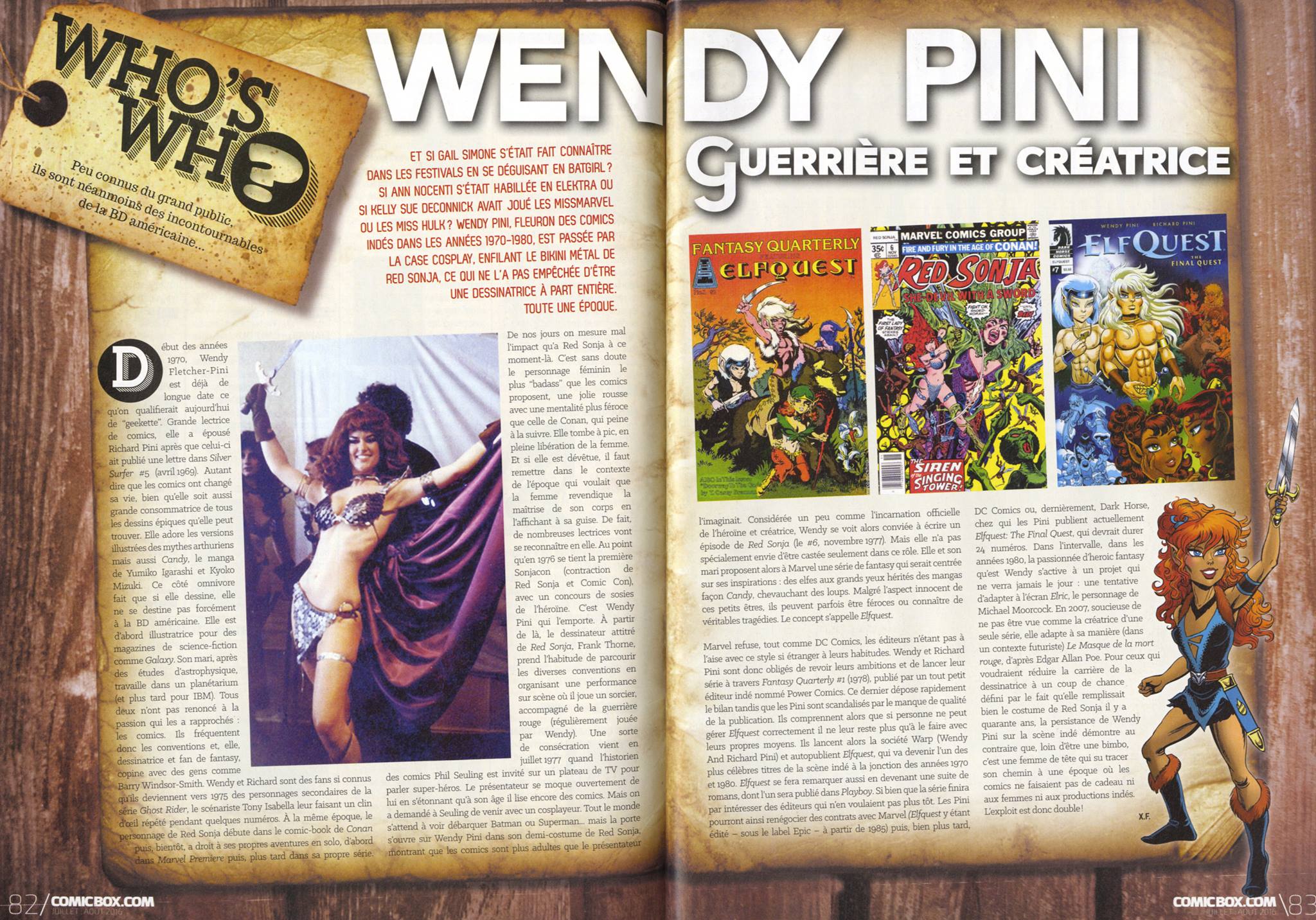 UPDATE: This just in from France, home of the bande dessine – Comic Box Magazine #101, July-August 2016. It looks to be a very nice article, and Richard spent most of last evening between Google Translate and the remnants of high school French lessons to render the whole thing readable. (Note: There are a few minor factual inaccuracies in the article that I’ve let be. The odd – to English-hearing ears – rhythms and tenses are probably as much due to my piecemeal translation as to the actual usage. Linguistic pot-holes aside, it was a lot of fun! – RP)

Who’s Who – Little known to the general public, they are nevertheless an unavoidable part of American comics.

The sub-head in red type: So what if Gail Simone was known at conventions by dressing up as Batgirl? So what if Ann Nocenti had dressed as Elektra or Kelly Sue Deconnick had played Ms. Marvel or She-Hulk? Wendy Pini, a leader in indie comics in the 1970s and 1980s, came even earlier out of the cosplay gate sporting the Red Sonja metal bikini – which did not prevent her from being an artist in her own right for an entire era.

The article: By the early 1970s, Wendy Fletcher was already for a long while what we today would call a “geekette.” A great reader of comics, she married Richard Pini after she had published a letter in Silver Surfer #5 (April 1969). Suffice to say that comics have changed her life, although she is also a major consumer of all the epic drawings she can find. She loves illustrated versions of the Arthurian myths but also Candy Candy manga by Yumiko Igarashi and Kyoko Mizuki. This omnivorous nature informs her that if she draws, she is not necessarily beholden only to American comics. She first illustrates science fiction magazines like Galaxy. Her husband, after astrophysical studies, works in a planetarium (and later for IBM). Neither have given up the passion that brought them together – the comics. So they attend conventions and she, a designer and fan of fantasy, makes friends with people like Barry Windsor-Smith. Wendy and Richard as fans become known around 1975 as secondary characters in the Ghost Rider series, screenwriter Tony Isabella giving them a repeated wink for a few numbers.

At the same time, the character of Red Sonja begins in the comic-book Conan, then soon graduates to her own adventures, first solo in Marvel Premiere, and later in her own series. Today we don’t well appreciate the impact of Red Sonja at that time. This is probably the most “badass” female character that comics offer – a pretty redhead with a more ferocious mentality than Conan, who hardly keeps up. It is timely, full liberation of women. And if she is naked, we must put ourselves in the context of the time with the woman who wants to claim control of her body by displaying it at will. In fact, many readers could recognize themselves in it. To the point that in 1976 was held the first Sonjacon (contraction of Red Sonja and Comic Con) with a concourse of lookalikes of the heroine. This Wendy Pini wins. From there, the recognized artist of Red Sonja, Frank Thorne, starts to attend various conventions and organizes a stage performance where he plays a sorcerer, along with the red warrior (regularly played by Wendy). A kind of validation comes in July 1977 as the historian of comics Phil Seuling is invited on a TV program to speak about superheroes. The host openly mocks him, surprised that at his age he still reads comics. But Seuling also is asked to bring a cosplayer. Everyone expects to see an appearance by Batman or Superman … but the door opens on Wendy Pini in her half-suit Red Sonja, showing that comics are more adult than the host imagined. Considered the official incarnation of the heroine, as well as a creator, Wendy is then invited to write an episode of Red Sonja (#6, November 1977). But she did not really want to be cast only in this role. She and her husband then propose to Marvel a fantasy series that would focus on her inspirations: elves with big eyes, inherited from the Candy Candy manga, who ride wolves. Despite the innocent appearance of these little creatures, they can sometimes be fierce or know real tragedies. The concept is called Elfquest.

Marvel refuses, as does DC Comics – the editors are not comfortable with this style so foreign to their habits. Wendy and Richard Pini are forced to revise their ambitions and launch their series through Fantasy Quarterly #1 (1978), published by a small independent publisher called Power Comics. It quickly goes bankrupt while the Pinis are outraged by the lack of quality of the publication. They then realize that if no one else can manage Elfquest properly there remains only to do it on their own. They then launch the company Warp (Wendy And Richard Pini) and self-publish Elfquest, which will become one of the most famous titles of the indie scene at the junction of the 1970s and 1980s. Elfquest will also become a series of novels, one of which will be published by Playboy.

The series will eventually gain the interest of publishers who did not want it earlier. The Pinis will be able to renegotiate contracts with Marvel (Elfquest being edited under the Epic label from 1985) and then, much later, DC Comics and, recently, Dark Horse, with whom the Pinis currently publish Elfquest: The Final Quest, which should last 24 issues. In the meantime, in the 1980s, the passionate fantasy drive of Wendy is active in a project that did not see the light of day: an attempt to bring to the screen Elric, the character of Michael Moorcock. In 2007, anxious not to be seen as the creator of a single series, she adapts in her own way (in a futuristic context) The Masque of the Red Death, after Edgar Allan Poe.

For those who would like to reduce the career of this artist to a fluke defined by the fact that she nicely filled the costume of Red Sonja forty years ago, the persistence of Wendy Pini on the indie scene demonstrates to the contrary that, far from being a bimbo, she is a woman of brains who made her path at a time when comics were made neither by women nor indie producers. The accomplishment is twofold!