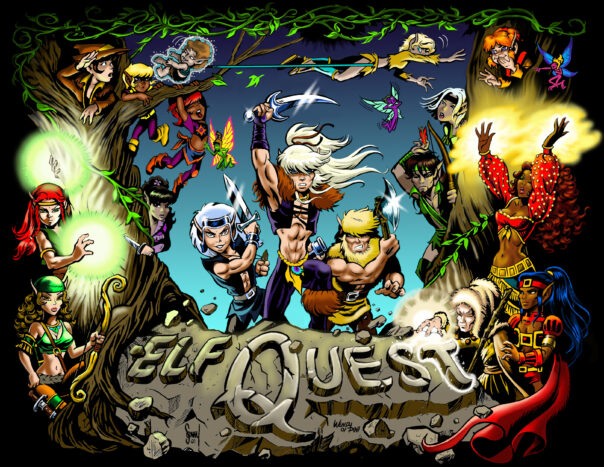 Each month during 2022 we’re releasing a new design in the Official ElfQuest Redbubble Shop which fans can get on a wide variety of items from art prints and puzzles to apparel and decor–and much, much more.

Our latest design titled “ElfQuest Adventure” is an artistic collaboration between veteran anime voice actor Sonny Strait and ElfQuest co-creator Wendy Pini. The two created this piece back in 2001 as the backdrop for the Warp Graphics convention booth shortly after Sonny began his art apprenticeship with Wendy.

Drawing and inks were by me and colors by Wendy. I remember it distinctly because Wendy gave me a particular assignment. Draw an ElfQuest poster, but she wanted a Shonen manga feel. It was the first time my work had been digitally colored, a feat I was incapable of doing at the time since I had never used Photoshop. When I saw it as the backdrop to the ElfQuest booth at Comicon I was so honored and thought, “This must be it.” I also thought, “Man, I am really in the comics biz now.”

Head to the Official ElfQuest Redbubble Shop to get the “ElfQuest Adventure” design.