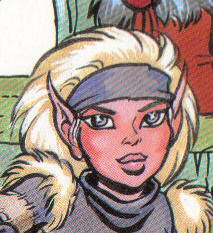 YOON (“u” sound rhymes with good or wood, not food or boon)

Daughter of Skywise;
Lovemate of Teir and Mender; Adoptive mother of Khorbasi

Born after the War for the Palace, Yun is a young Go-Back who longs for adventure. Her desires were fulfilled when Kahvi returned to the Go-Backs after living many years with the Wolfriders in Thorny Mountain Holt. Without hesitation, Yun joined the legendary chieftess to raid the Sun Village, an attempt to regain the only remaining piece of the Palace of the High Ones (as Rayek had taken the Palace itself to the future). Yun discovered that Chief Zey and Chot planned to get rid of Kahvi once the tiny Palace was obtained. Chot, however, was overpowered by preservers, while Yun gave into her better nature (and loyality to Kahvi) and returned the little Palace to the Sun Folk.

Mortally wounded by Chot during the Go-Backs’ second attack on the Sun Village. She, and all the other wounded, were later healed by Mender and Leetah. She later left to help find Windkin in the Forevergreen. During this time she had an encounter with a WaveDancer in a pool near the rebel human camp (or was it a dream?).

After the Palace reunited the elf tribes, Yun met her Wolfrider father, Skywise, for the first time. She then left with her fellow Go-Back, Krim, to join Ember‘s Wild Hunt on their quest to rid the world of Winnowill’s shapechanged creatures.

Yun is the only known child of Skywise. However, her heart is as big as the sense of adventure she inherited, and she ended up adopting the orphaned-human cub, Khorbasi and raising him as her own.