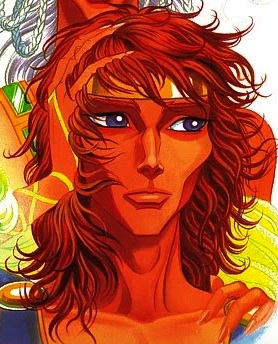 Yurek is of the earliest generation of elves born upon the World of Two Moons after the High Ones crash-landed on the primitive planet. He was originally one of Voll’s band of exiles, wandering the woodlands searching for a safe place to call home, away from marauding humans.

Ever curious to explore and expand on his magical ability to manipulate rock, Yurek chose not to follow Voll when he sequestered his followers behind the walls of Blue Mountain. Instead, he founded a different tribe, called the Rootless Ones, determined to wander until they found the same safety sought by Voll, only as part of the world, not hidden away from it.

The Rootless Ones thrived for a time, but were ultimately decimated by humans despite having many warriors in their ranks. One group, Yurek and four other survivors–Hassbet, Savah, Maalvi and Dreen, fled into the burning waste of the desert to escape the murdering five-fingers. It was only through his rock-shaping magic, which he used to locate underground water and to shape shelters from the very rocks, that they survived.

Though the heat was searing, Yurek reveled in this new environment made entirely of rock–from the tiny grains of sand of the desert to the sandstone hills of the World’s Spine Mountains that they discovered on its far side. That it was entirely free of humans was an added benefit. Yurek had finally found his home. These Rootless Ones discovered a green oasis hidden in the mountains and it was there that they settled. 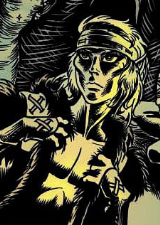 Shortly after, Yurek Recognized the young maiden Savah and they bore a child, and in doing so, founded the Sun Village of Sorrow’s End.  Many years passed, and the village grew. No longer rootless, Yurek, Savah and their offspring became the Sun Folk. Yurek used his powers to reach deep into the rock and create the village well that was its lifeblood. He also shaped the foundation of the large central village hut, a gathering place for all.

Eventually, in the safety of the Sun Village, Yurek became obsessed with pushing the limits of his power, trying to understand the very nature of the rock. He shaped the Bridge of Destiny, and entranced by his effort and total union with the stone, he plummeted off its peak in a strong wind gust, his spirit finally able to become one with the rock.