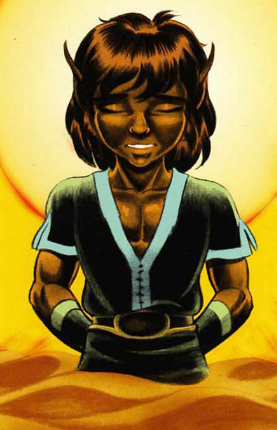 Lovemate of Shenshen and Venka

Before Zhantee became a Jackwolf Rider, he worked the clay of the Sun Village, producing pottery for the Sun Folk to store grains, water, paints and other supplies. He is shy, gentle and reserved and the quiet life in Sorrow’s End suited him. Yet he always admired Rayek’s constant drive for self-improvement, and so when Dart founded the Jackwolf Riders, Zhantee volunteered for the new challenge.  It was a decision that would change the course of his life, as Timmain sensed his latent magic ability to form a protective shield and selected him to join Cutter’s quest to rescue the elves emitting an ear-shattering psychic scream for help.

The scream turned out to be that of the very High Ones upon their crash-land on the World of Two Moons. When Rayek stole the Palace into the future to prevent the scream from ever being made, Zhantee was stranded halfway across the world with the Wolfriders. He rose to the challenge of life in the forest, and eventually became an integral part of Cutter’s tribe. His shielding ability saved the lives of his tribemates more than once.

Like Rayek and many of the other Sun Folk, Zhantee dreamed of Recognizing Leetah, yet was not jealous of Cutter for receiving that honor. He was happy to just admire the couple from afar, and if he was perhaps a little inventive with aches and pains as an excuse to visit the Leetah’s hut for her healing ministrations, no one minded. He returned the favor by saving Leetah’s life from a deadly attack from Winnowill.

Zhantee gave his life during the Shards War protecting his tribemates from the collapse of a tower that threatened to crush Cutter’s warriors. At the moment of death, Zhantee’s lifelong wish to know Recognition with Leetah was granted when Cutter shared with him the full memory of it, bringing Leetah into the sharing as well, though she was many days distant at Howling Rock.

Zhantee’s spirit now inhabits the Palace, and is more active and receptive to the living than most, still seeking to serve and protect his fellow elves.